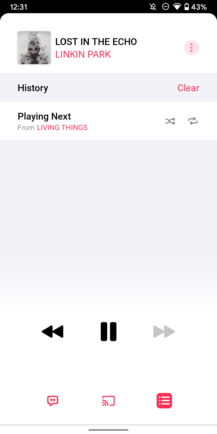 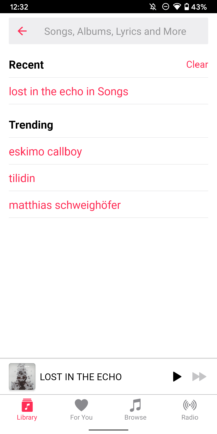 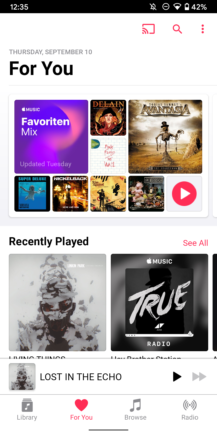 The first things you might notice when launching the new version is the new icon, the ever-so-slightly less saturated red accent color, and the status bar — it's now as white as the rest of the light theme and fits in much better. The bottom bar items have been shuffled, too, and there's a new Listen Now section replacing the For You tab. In it, you'll find mostly the same things, though the layout has been redesigned. The search icon has also been moved to the bottom bar. When you tap it, you're encouraged to browse categories if you don't want to search for a specific term. 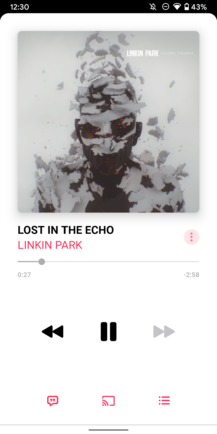 In version 3.4, the Now Playing screen's background is dynamically generated from album cover colors, though the general layout remains unchanged except for the queue. When you head to it, you'll see that an autoplay feature will automatically keep playing music once your selected playlist or song ends, which is in line with most other streaming services. You can turn that off via the new infinity button if you prefer. It's now also possible to add what you're currently listening to to your Snapchat, Instagram, or Facebook story by tapping the three-dots overflow menu and selecting Share Song. 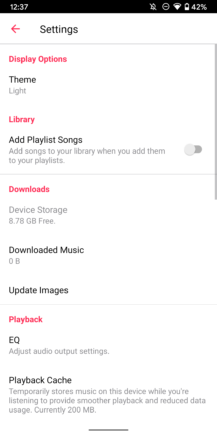 There are also some changes to settings: there are finally easy-to-manage options for cellular data usage.

You can try joining the Apple Music beta program on the Play Store, but it appears to be full at the moment, so you might want to download the update from APK Mirror directly instead. Keep in mind that this is a beta, meaning it might be even buggier than the regular release.

After a brief beta, Apple Music 3.4 is now heading out to everyone on stable, bringing with it all the changes listed above. The update is rolling out now on the Play Store, but you can also grab it here at APK Mirror if you want.