YouTube is one of the most widely used apps in the world, so whenever the company makes even a slight change, people notice. The announcement that four playlist-centric features were being killed last month was a bit disheartening, but YouTube's latest move doesn't kill off old features — instead it brings a variety of useful new ones to life, including streamlined player controls and a more accessible captions button.

In a blog post today, YouTube detailed recent updates that make video watching easier than ever, along with a few truly new tidbits to boot. The video playback page has been "streamlined" with a more accessible closed captions button (after doing away with community-driven captions) and a switch to toggle autoplay directly from the video controls. (Does anyone actually keep autoplay on?) The company says some buttons are also being re-arranged to simplify the design, and controls are being altered to somehow seem "snappier."  ¯\_(ツ)_/¯

Closed captions are only a tap away now.

YouTube also announced that swiping up on a video will put it into fullscreen mode and swiping down will exit fullscreen. Those gestures supposedly rolled out on the web version earlier this year, but we can't seem to get them working yet — perhaps Google decided to roll the gestures out more broadly starting today. This seems like a small addition that could make a big difference for those who have trouble hitting tiny targets.

The gestures make it much easier to go in and out of fullscreen mode.

Suggested actions are also rolling out that prompt users to do things like rotate their device out of portrait or use VR mode when YouTube detects that it would enhance the experience. The company plans to expand the actions suggested in the future, so it'll be cool to see how this feature evolves over time. Google has been focusing on ambient computing that makes technology more seamless recently, and it looks like this is the latest step down that road. 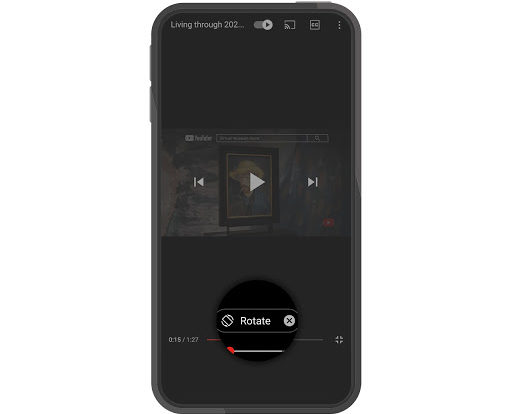 You never know when these new features will start showing up due to Google's love of server-side rollouts, but be sure to download the latest version of the YouTube app from APK Mirror or the Play Store so that you don't miss out.