Insta360 has made a name for itself in the enthusiast 360 camera market thanks to a line of consistently excellent products that culminated in the One X in 2018, possibly the most lauded 360 cam of its time. The company came back in 2020 with a more ambitious project: a modular cam that can transform from an action shooter to a 360 cam — and other potential form factors — in a snap.

But in aiming to do everything and in trying to copy the GoPro so much, the company has introduced a long list of compromises that didn't plague its previous offerings. The end result is a pricey camera I can't easily recommend even if I like a lot of what it offers. 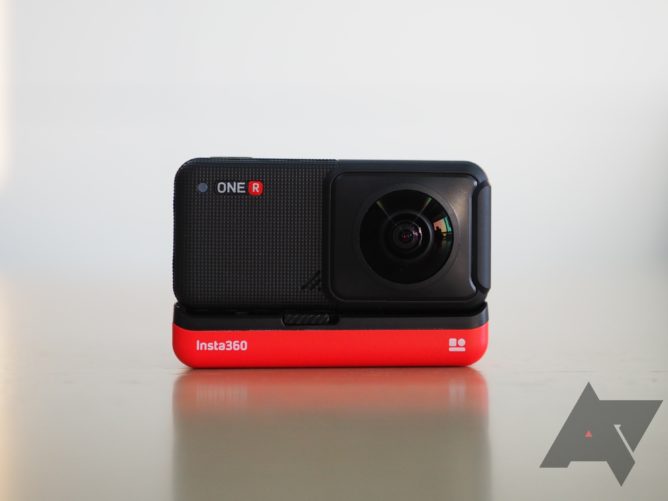 At the heart of the Insta360 One R's design is its modular approach. The red battery on the bottom and the core cube are essential in any configuration, but you can add any module to them. Insta360 currently offers a 4K wide-angle lens, a 5.7K 360 dual-lens, and a 5.3K 1-inch Leica sensor. I'm reviewing the Twin Edition which comes with the first two. A dual-lens 3D mod has also been promised, and more might be added later. 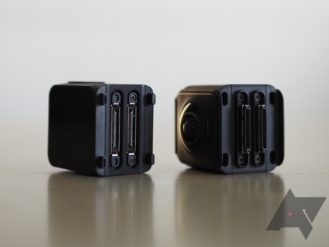 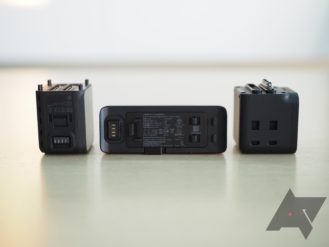 The core and module snap together via two proprietary ports, then you plug them in the battery base. With the three units attached, I can still see some relatively big gaps (right image below), so I only felt comfortable using the cam handheld in a calm environment or by placing it on a stable surface. In less ideal settings, when I want to make sure everything is tightly secured for better ruggedness and waterproofing, I need to insert the cam into the included bracket. The latter is very similar to the one that comes with the GoPro and includes a tripod mount at the bottom. The upside here is any existing GoPro accessories should be compatible with it. 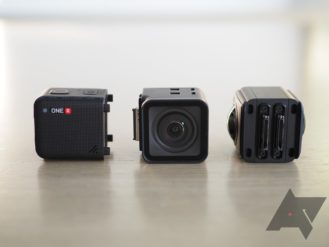 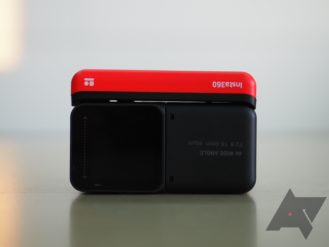 However, each time I think about changing the photo module, I need to disassemble everything and rebuild from scratch. That works if I have a table in front of me, but it's just not practical if I'm walking around a city, riding a car or bus, swimming in a pool, or otherwise on the move. I know I'll end up damaging or losing an element for sure.

That's the biggest complaint I have about the One R. The concept is cool on paper, but in reality, I found myself discouraged from switching between the modules unless I had both the time and space to do so. I always worried about carrying the extra module with me, too. There's a small lens cap that protects the 360 cube, but nothing for the 4K one, so it could get scratched in a bag. 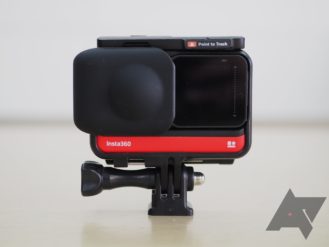 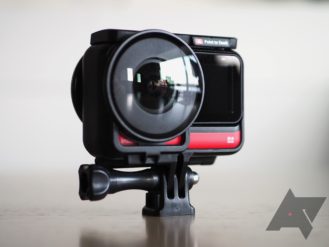 Back to the cam, there's a MicroSD slot and a USB-C charging port on the side of the core module. On the top, you'll find the power and capture buttons, and on the back, the small touchscreen. 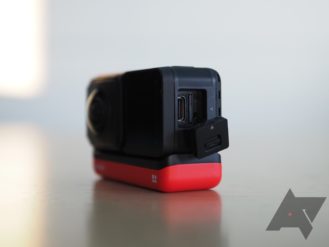 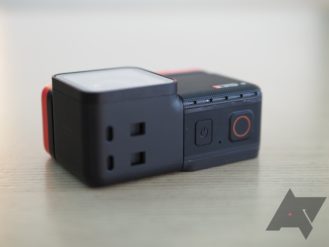 The addition of a display to the Insta360 line is an excellent improvement, as it lets you preview captures (even the 360 ones) before and after taking them. You can also switch between modes (photo, video, HDR, etc), tinker with manual settings (EV, WB, ISO, shutter), and change plenty of other controls from the cam without connecting to your phone. In the Twin Edition box, you get the battery base, core unit, 4K wide-angle module, 5.7K 360 dual-cam module with its silicone lens cap, mounting bracket, USB A-to-C charging cable, manual, microfiber cloth, and a couple of stickers. There's no protective case or pouch to carry everything, and no way to protect the 4K module. 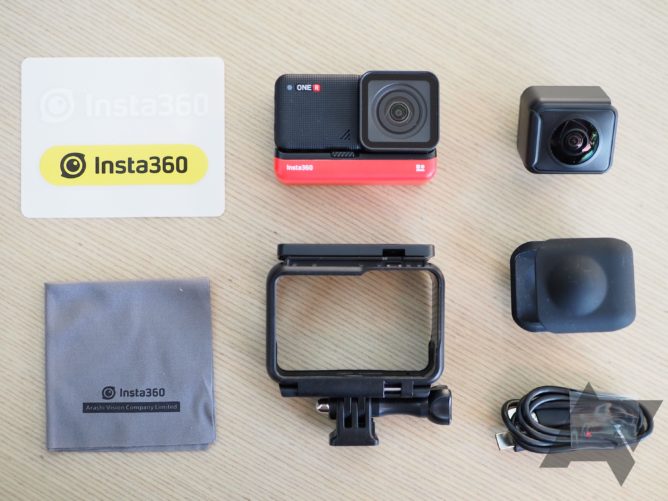 Shooting with a 360 cam always makes me rethink capture angles. For still pics, I need to stop and take a sweeping look at everything around me because it'll all end up in the shot — including you. Using that to my advantage can result in some amazing tiny planets and photospheres. For videos, the benefit is in not worrying about framing at any point. I just hold the cam and let it save everything, then edit to my heart's content. Insta360 also brings impeccable stabilization to videos, so the result is often as smooth as using a tripod or gimbal. The app can even suggest interesting bits of videos, track subjects, and create stories from multiple videos to highlight the best moments.

However, the One R has two imaging shortcomings compared to the older One X for 360s. First, the tripod mount has a bit of a rotation wiggle even when tightly screwed, causing small misalignments for the "invisible selfie stick," which result in a slightly visible stick in some shots. Second, the thicker body means there's a larger blind spot between the two lenses, resulting in slightly worse stitching between the front and back image.

The 4K module transforms the One R into a GoPro-like action cam. It's not as exciting to use as the 360 module, and nor is it as good as a standalone action cam. The video resolution is lower than most of its competitors, the slow-mo less impressive, and the HDR and night mode are both disappointing. The only neat feature it offers is being mountable to face the front or rear, so you can check the display while filming yourself. 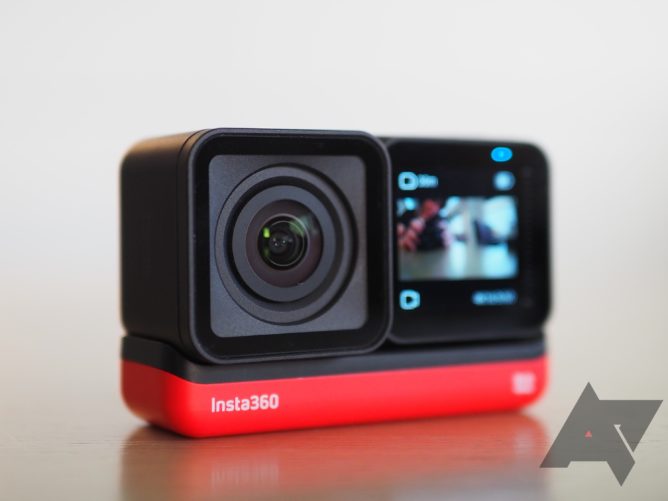 Other cool features for all modules include voice control and the option to use Bluetooth buds as a mic. Insta360 will tell you this is an AirPods-only feature, but I can confirm other buds from Plantronics, Tribit, and Anker worked. So you can walk away from the cam or use it in noisy environments but keep a relatively clean audio recording. 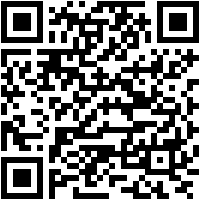 Previous Insta360 cams used to require a standalone app, but the company recently started unifying everything under a single software experience. Its new eponymous app adds to the joys and frustrations of using its cams: As always, it packs a ton of features but remains clunky and buggy on Android.

Existing Insta360 users will feel right at home with the five-tab interface, though only three really matter: albums, camera, and stories. The first is where you can see and edit existing captures, the second lets you control the cam remotely, and the third is where the magic hides. Past the tutorials, tricks, and auto-generated stories, there's a "Shot Lab" feature that explains how/what to shoot for a specific effect and handles the video's editing without much fuss. You'll find samples from it below.

The app's manual editing capabilities are beyond exhaustive. Just think of an effect or edit you'd want done and the app most likely has it, from tracking subjects to switching viewpoints, slowing down, accelerating, rotating, and more.

What's still frustrating, though, is that 360 pics aren't saved in .jpg by default, and you have to manually export them. Batch exporting speeds up the process, but you still lose date and time metadata. The same is true for videos. So if you shoot over the span of several days then export, all pics and videos will be tagged with the time you exported them. I can't believe Insta360 hasn't sorted this issue yet — it's been years! Thankfully, GPS tags are accurate, but only if you use the separate GPS remote or connect your phone while shooting.

The app also kept hanging and freezing on my Pixel 4 XL with Android 11. The screen would become unresponsive for a few seconds or the app would have to be force closed and restarted several times during intense video editing sessions. This isn't a device-specific issue because I've had it with my previous Insta360 cams and other phones, and the app's Play Store reviews are full of similar complaints. This is a big cloud over what is an otherwise fun experience.

2020 is a weird time to test a camera made for fun and adventure. Over several months, the coolest place I visited was my living room, so you'll forgive me for the monotonous pictures and videos below. I had to limit my testing to a few safe locations, but at least I made sure there's a pool and some dogs.

Below are a few pics taken with the 4K wide-angle module. The quality is nice in sunny outdoor situations, but the HDR and night mode are quite disappointing. 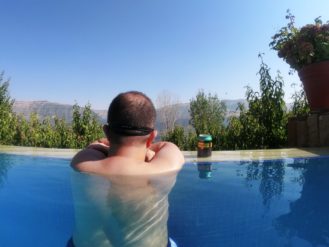 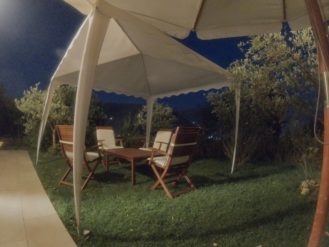 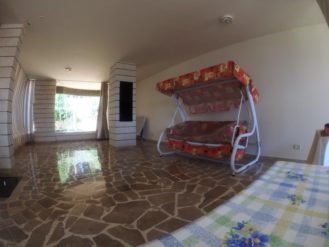 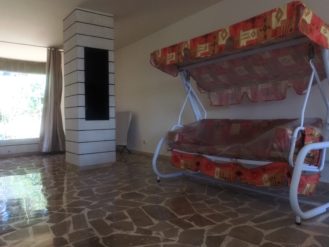 Moving on to the 360 module, you can see some full-res photospheres as well as some exported stills. 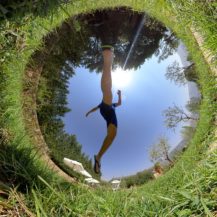 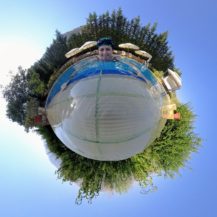 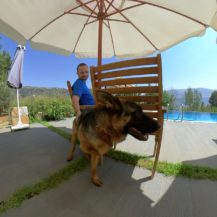 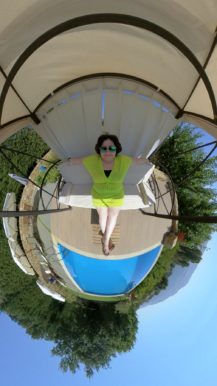 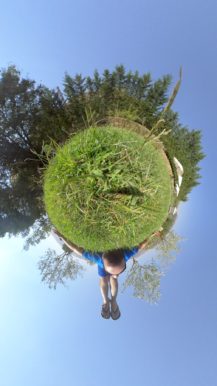 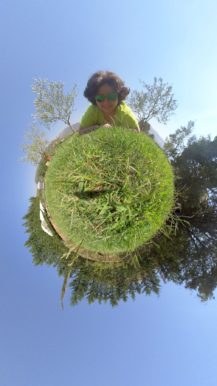 There's a lot of fun to be had with videos, especially with the 360 module. The samples below are a tiny, tiny fraction of what you can do with the cam.

Above: Shot with the 360 module, automatic tracking applied to the dog while editing. This is the result.

Above: Simple manual edit to create the tiny planet effect. Below: Manual edit with an angle + lens change.

Above: The bad stitching worsens underwater, creating a portal-like effect.

Above: Just don't rely on the 360 module to get a narrow-angle video. The cropping and res are bad. (Side note: good boy!)

Maybe. Insta360 has some of the best software capabilities in the 360 and action cam market. Although clunky and buggy, its app is full of pre-capture settings and post-capture editing options that I can't possibly list or detail in one review. The company also sends frequent firmware and app updates that let you get more out of your cam, like the ability to use it as a webcam. That and the image quality are one of the highlights of the One R and you won't regret buying it once you start exporting your pics and videos.

On paper, the modular approach sounds like a perfect money and space saver — why waste either on single-purpose cams when you could get the main components once and swap the lens according to your needs? And why buy a whole new cam to upgrade your lens to a better version? However, the One R feels like a first-generation product that sacrifices a bit too much to achieve that level of versatility.

Switching lenses is clumsy enough that it eventually discourages you from doing so on the go. And even after you've installed a new lens, you have to make do with its limitations. As a 360, the body's width isn't ideal and it lacks a tripod screw hole, forcing you to use the mounting case. As an action cam, it's not as powerful as its competitors. As both, and potentially more? It's a very, very cool jack of all trades, master of none. 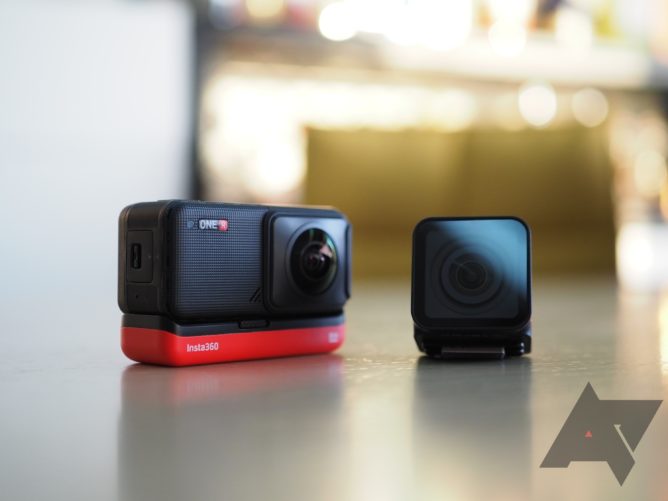 10 new and notable Android apps from the last week including Yahoo Lite, CalenTile, and Lonely ...

Google Play Music vs. YouTube Music: Everything you need to know