The trailer above offers a solid look at FAR: Lone Sails, though it doesn't really show off the game's controls, which are completely touch-based in the Android port. Wired and bluetooth controllers don't work, so touch controls are the only option, and they take some getting used to. You see, you have to manually control your giant vehicle, and in order to do this, you'll pinch to zoom on the screen so that you can control your character with a left, right, and jump button, all so you can push a few of the vehicle's red buttons to keep things running smoothly. While a little trial and error clears up which buttons you need to press in order to move the vehicle forward, hitting these buttons isn't always as easy as I'd like. 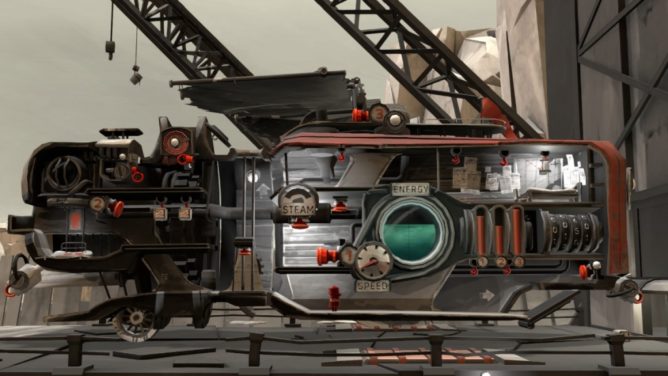 Red buttons galore, and they are not always easy to hit

I would also like to point out that FAR: Lone Sails is a short game that can be beaten in about 3 hours, so the $5.99 sticker price may be tough to swallow for some, though it's good to keep in mind that the Steam version typically retails for $14.99 (though it's currently on sale for 75% off), so the Android port is relatively cheap in comparison. At the very least, this is a premium release that's absent of any in-app purchases, so what you see is what you get, a rarity on the Play Store.

For me, FAR: Lone Sails is an enjoyable game that's easy to relax with after a long day, and while it can be beaten in a few sittings (or even one), the story was definitely worth experiencing. More or less, the game's a work of art, and while the middling touch controls and short playtime is a downer, I still can't help but recommend that people give FAR: Lone Sails a try. So if you'd like to check the game out for yourself, you can grab your copy from the Play Store widget below for $5.99. Ask us anything about the OnePlus 8T (Q&A)