IFTTT allows users to connect apps, services, and devices to each other with custom applets, enabling new levels of smart functionality and interactivity. The service launched a paid subscription last month that took applets to the next level, and now that it's got a new revenue stream coming from that IFTTT Pro plan, the company is has unveiled a roadmap of what to expect in the future.

Pro members can expect to see a number of new features and improvements going forward, including the ability to clone and edit self-created applets. Applets made by the community will also be copyable and updatable so users can adapt an applet to work for their specific use case. Soon, users on the paid plan will also be able to use the same action multiple times in a single applet, build conditional logic via a simple UI, and multi-select options for triggers, queries, and actions in a single applet.

While these upgrades aren't landing today, some improvements to the My Applets section that make finding and organizing applets easier are live right now. Self-created archived applets are viewable and can be easily restored if necessary, and this ability is rolling out to discoverable applets soon, too. The company says Pro members can also look forward to other management features, like publishing applets and tracking activity metrics. 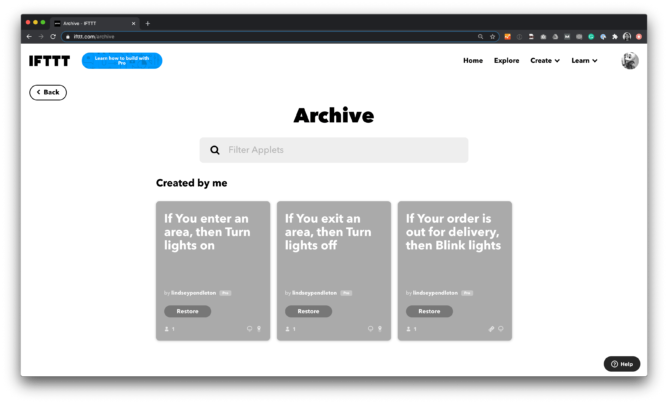 Some of the limits imposed on premium services are being lifted for Pro subscribers. For example, the limit on Twitter has been raised from 25 to 50 tweets per day. The way a service looks can be just as important as how it works, and IFTTT is also working on design updates to improve the "findability" of services and give members more details about what capabilities they support.

If these plans sound like something you're interested in, IFTTT is allowing Pro members to name their own monthly price (as long as it's $1.99 or more) until October 31. Starting on November 1, new subscribers will pay $3.99 per month.