Not too long ago, Dropbox introduced a whole slew of new features to its subscribers without raising its prices: there's its own password manager, the extra secure Dropbox Vault, and the option to back up select folders outside Dropbox from your computer. The company also announced a Family plan that would let up to six people share a single 2TB account, and today, this new tier is available to everyone. It costs $16.99 a month, which is just $7 more than a one-user Dropbox Plus subscription.

The Family plan offers the same feature set that's available on the Dropbox Plus plan — every member gets access to Dropbox Passwords, Dropbox Vault, and computer backups. That's on top of the regular Dropbox features like Spaces, Paper, Smart Sync, and so on. There's also a Facebook integration that allows you to add photos and videos from the social network to your Dropbox for safekeeping.

Family members can save data to their own private storage, and it's possible to share things in the Family Room, a shared space that allows you to make content available to everyone on the plan. 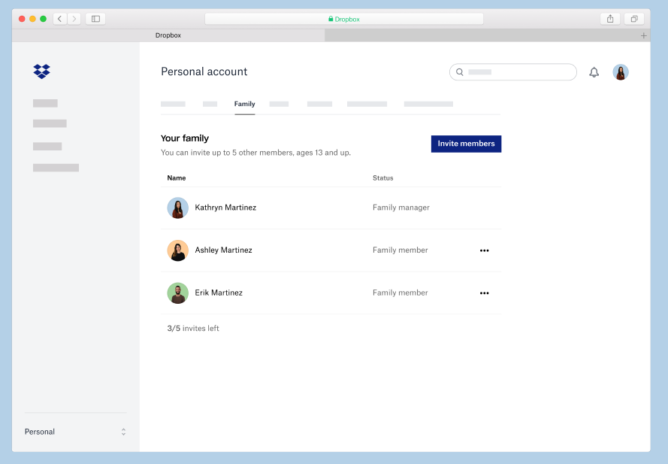 There's one important thing to keep in mind — Dropbox Family is only available to children over the age of 13, so if you have younger kids, you might not be able to fully benefit from the offer.

Dropbox touts that the $16.99 monthly plan is less expensive than two individual Dropbox Plus subscriptions at $9.99 a month, but compared to other cloud storage services with family sharing options, it's still pretty pricey: Microsoft 365 including all Office apps plus a total of 6 TB for six people and Google One's 2TB family plan both cost only $10 per month. The only thing weighing in Dropbox's favor is its reliable desktop syncing client, which is invaluable for many.

You can read more about Dropbox Family in the cloud storage provider's help document or the blog post announcing the broad availability of the plan. The new plan is available on the Dropbox website.