Google Photos only recently got an improved custom share sheet, and Twitter is testing a better implementation of its solution as well. YouTube apparently didn't want to be left out as some people report that they're seeing a new share sheet in the app, too. In contrast to the other two, the video service's solution is a drastic regression in function, making me wonder if it's a bug that passed testing.

The current share menu that's still available for most people lets you send video links via all supported applications on your phone, and it also includes some non-app options like "copy link," Bluetooth, and Nearby Share. The new share menu is visually identical to the current one, but it loses a ton of options. Many people can only see the aforementioned "copy link," Bluetooth, and Nearby Share options, while others are seeing one or two of their apps — for me, that's Firefox and Firefox Nightly while our own Rita sees her Synology DS File app. 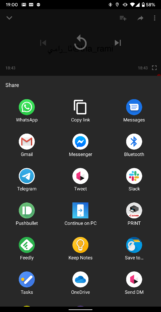 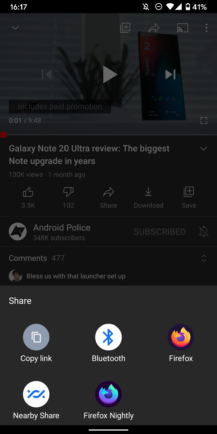 The regression seems to appear randomly across multiple recent versions of the YouTube app, so it's likely part of some server-side updates. I can't imagine that the reduction of share targets is an intentional change as it just doesn't make any sense, and there's not even an option to bring up the native share sheet instead.

If you absolutely rely on a functional sharing experience, you can try installing an older version of YouTube to see if it fixes the problem for you. Version 15.40.40 doesn't exhibit the behavior for me, and you can get it from APK Mirror. If the reduced share sheet does turn out to be a bug, the problem should be fixed sooner rather than later in any case.