Ever since Google announced back in 2017 that Hangouts would be split into the Chat and Meet apps, consumers have been curious about when to expect major changes. We started seeing the first signs of the transition earlier this year, and now Google is letting Hangouts holdovers know what to expect going forward — including the plans for Google Fi and Google Voice customers.

Google Chat is targeted at businesses and workplaces right now, but that's changing next year. In the first half of 2021, Google says that everyone will be able to transition from Hangouts to Chat. Existing conversations, contacts, and saved history will theoretically be migrated over into the standalone Chat app, but users will be able to access Chat from Gmail, too. 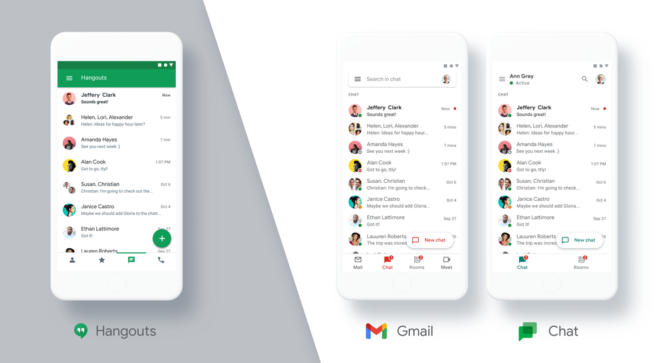 Two apps are better than one, right?

For Google Fi customers using Hangouts, the Messages app will be their new best friend. Starting soon, Fi users will be able to make voice calls and check voicemail from Messages for the web, manage conversations from Messages across devices (even when their phone is off), and migrate existing Hangouts conversations. In early 2021, Hangouts will stop working with Google Fi.

People who use Google Voice functionality in Hangouts will be moved to the dedicated Google Voice app beginning this month, although support won't be entirely removed until early next year. As Hangout's death date approaches, Google will be making a few changes to adhere to new telecommunications regulations, including removing the call phones feature (paid calling credits will be refunded) and updating the group video calling experience to use Meet.

In late 2021, Hangouts will officially be closed off to G Suite/Workspace customers, who will be migrated to Chat with no option to opt out. Regular consumers will likely follow after that.

Hangouts has stuck around for a good while with a knife to its neck, but it looks like 2021 is the year when Hangouts will say "adieu" and ride off into the sunset for good.