Many developers have been trying to copy the success of Niantic's Pokémon GO with clones that offer similar gameplay, and so it's easy to jump to conclusions when new map-based mobile titles are revealed. Surprisingly Bandai Namco has actually come up with a unique way to utilize the map, and so Pac-Man Geo is a game where players will create new mazes out of the streets in their cities. While there's still a collection aspect in the title, seeing that high-scores will unlock collectible landmarks, at least the core Pac-Man gameplay has been retained. Pac-Man Geo is a brand-new listing on the Play Store, and it's already available for pre-registration.

Since Pac-Man Geo just arrived on the Play Store, details are still light. Today's PR hints the game will arrive this month (September 2020) and will come to 170 countries, though there's no word how the title will be monetized. I would imagine the game will arrive as a free-to-play release, but so far, there are no signs of what these IAPs will cost.

What we do know is that players will get to create unique mazes out of their local city streets while also competing for high scores in those very mazes. It would seem everyone will be free to travel the globe creating new courses to play, and this should allow specific locations to earn reputations for offering enjoyable challenges. Of course, this all hinges on the game's popularity, because if no one is playing, then there won't be any courses or high scores to bother with.

As a fan of the original Pac-Man, I have to say this is the first map game title to pique my interest. I could actually see myself leaving the house to take on a few player-made courses because there's an actual game behind the goofy collection stuff where player skill should ideally matter, which is why I'm happy to hear there will be leaderboards. 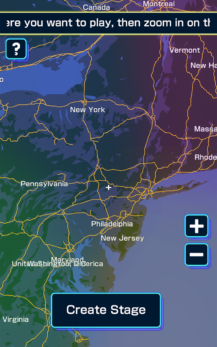 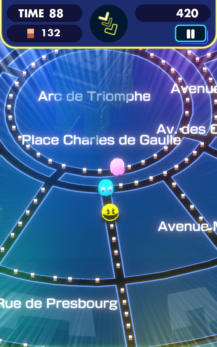 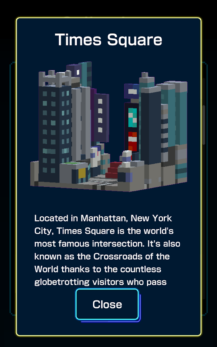 So if you're eager to see what Bandai Namco has up its sleeve for Pac-Man Geo, you can pre-reg through the Play Store widget below to receive a notification the day the game arrives. Hopefully, Bandai will fill us all in on what to expect with further news in the coming days, but until then, enjoy reading through the new Play Store listing.

Bring the real world map to the game stage with Google Maps Platform
Cooperated in the planning and development of “PAC-MAN GEO”,
An application for the App Store and Google Play™
～A proposal for utilizing cutting-edge technology in entertainment and innovative play～

In line with its vision of “Creating Entertainment Innovation,”BANDAI NAMCO Research Inc. has cooperated in the planning and development of application game PAC-MAN GEO for App Store and Google Play, which will be available in 170 countries from September 2020. The scope of this cooperation has covered prototype direction and many other aspects aimed at the game’s commercialization.

PAC-MAN GEO is an action game utilizing the road information of Google Maps Platform. By selecting the scope to be played as a stage from a world map, players can build their game stage in real-time, and encounter PAC-MAN, power pellets, and ghosts. Through this service, players can play PAC-MAN on a real-world map.

Backing the proposal of a “new type of play” utilizing Google Maps Platform, BANDAI NAMCO Research (previously BANDAI NAMCO Studio Inc.*) began engaging in technical verification and prototype direction in 2018. Based on the results of the technical verification, from 2019, the company cooperated with planning and development for the game’s commercialization. While maintaining PAC-MAN’s simple rules and operability, players can experience the game at a deeper level than ever before, such as the joy of choosing one’s own stage to travel the world as they please, the pleasure of finding interesting terrain, and the fun of sharing these new discoveries.

* BANDAI NAMCO Research was established in April 2019, therefore research and development work began in the research division of the then BANDAI NAMCO Studio Inc.

PAC-MAN is an arcade game released by NAMCO Inc. (present-day BANDAI NAMCO Entertainment Inc.) in May 1980, which celebrated its 40th anniversary this year. It’s cute characters and simple way of playing with a single lever led to its huge popularity not only in Japan, but also around the
world, where it was adapted into an animation, etc., and ultimately received recognition in the Guinness Book of Records as the most successful coin-operated game.

In addition to Maps, a product which presents users with customized map and street view images built from Google Map covering over 200 countries and territories, functions include Routes, which presents the optimal route to a destination, and Places, which enables users to search destinations; and can be applied to all businesses.

Pac-Man Geo lands on Android, and it could have used more time in the oven

Last Month Bandai Namco announced Pac-Man Geo, an map-based title where fans can play classic Pac-Man games on a worldwide map, which is an interesting concept that at least offers something different in comparison to all of the Pokémon GO clones out there. Despite never announcing a release date, Bandai has officially launched Pac-Man Geo on the Play Store, and it's clear the game could have used more development time. While you can create your own Pac-Man stages out of a city's streets, the touch controls aren't great. For some reason, Bandai has opted to display each course in an isometric view, which makes swipe-based moves difficult when you can't really tell which direction you should actually swipe. This view is then made worse by unresponsive controls, making for a frustrating game that isn't any fun.

Pac-Man Geo is a free release that's supported by advertisements, though multiple currencies, loot boxes, and purchasable powerups all exist in the game already. These mechanics are not yet being abused since there are no in-app purchases in the title, though anytime the dev wants to cash in, the groundwork is there, which is worrying. This is why today's release feels more like a beta that will be monetized at a later date.

There are two modes of play, the Map Mode and the Tour Mode. Map Mode is where fans can create their own mazes out of local city streets, and Tour mode is where players will compete against a worldwide leaderboard. Sadly the Map Mode only works if your local streets are high in number. This means unless you live in the city or a large suburb, forget making a map near your house, a common problem with map-based games that Bandai has clearly not solved.

All in all, Pac-Man Geo isn't as polished as it should be upon its official release, and thanks to the awful controls and weird camera angle, it's difficult to recommend this title since the core gameplay isn't that fun. Still, if you'd like to check the game out for yourself, you can grab the free install from the Play Store widget at the bottom of the page.

Leading interactive entertainment publisher and developer BANDAI NAMCO Entertainment Inc. today announced the official launch and availability of PAC-MAN™ GEO for Apple iOS and Google Android devices in the Americas and in over 170 regions. PAC-MAN has spent a lifetime navigating arcade mazes, now in PAC-MAN GEO, he’s hitting the streets of real-world cities with his fans, in search of landmarks and adventure along the way. While pre-registered players would have had PAC-MAN GEO automatically installed on their devices today – we invite all PAC-MAN and mobile game fans to join in the fun and download PAC-MAN GEO from either the Apple App Store or Google Play Store for their mobile devices today.

Taking to the streets of New York, Paris, and Tokyo, and places in between through the Google Maps Platform, PAC-MAN will tour the world visiting landmarks big and small along the way. Utilizing detailed maps of famous cities, PAC-MAN GEO brings classic PAC-MAN™ gameplay to city maps where PAC-MAN navigates the maze of city streets with Inky, Blinky, Pinky, and Clyde in chase. Power pellets will be also be placed on the map, enabling PAC-MAN to turn the tables on the pesky ghosts.

“PAC-MAN GEO is breaking the traditional concept of the PAC-MAN maze and allows PAC-MAN to be played in real locations around the world for the first time ever in its 40 year history,” says Dennis Lee, Director of Brand Marketing at BANDAI NAMCO Entertainment America Inc. “As PAC-MAN continues to celebrate his 40th anniversary in 2020, BANDAI NAMCO Entertainment is finding ever more innovative and fun ways to create new PAC-MAN experiences for fans young and old to play. We hope PAC-MAN GEO will be another example of a memorable collaboration with Google and one fans will enjoy immensely.”