YouTube Music added support for Android TV earlier this summer, but we weren't very impressed. As the approaching death date for Google Play Music draws closer, YouTube Music will soon replace GPM on TVs. Google is taking this opportunity to introduce new improvements to the YTM experience on TVs, including the ability to play uploaded music and get recommendations right from the homescreen.

Users will soon be able to access their music library from the YouTube Music tab of the YouTube app on all smart TVs, giving the ability to easily access playlists and liked songs. The team is also introducing updated visuals that are supposed to showcase album and playlist artwork "in their best form," whatever that means. 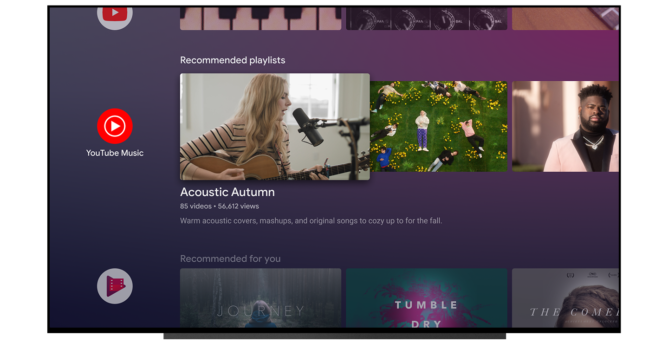 There are also updates for smart TVs running Android TV specifically (including the new Chromecast). After being added to the mobile and web versions, user uploads are finally making it to the big screen.  A new playback interface listing the song and artist name with a progress bar is coming, too. And on devices that use the standard Android TV home screen, there will be a dedicated row of recommendations for YouTube Music so you can start jamming out almost instantly.

While YouTube Music is still just a piece of the standard YouTube app, the experience is getting better with these upgrades. The streaming service added the ability to cast uploaded music for all users earlier this month, and a new tabbed homescreen layout is also floating around. Google might have a long way to go before it can convince die-hard GPM lovers that it's serious about YouTube Music, but steps like these prove it's going in the right direction.