OnePlus phones are among the most powerful around and sport high refresh rate displays, so it makes sense to target mobile gamers. There are already a number of titles that can be played at 90 or 120 frames per second, and now Fortnite is joining the list. A new partnership with Epic Games sees the OnePlus 8 and 8 Pro as the first mobile devices to run Fortnite at 90 FPS. 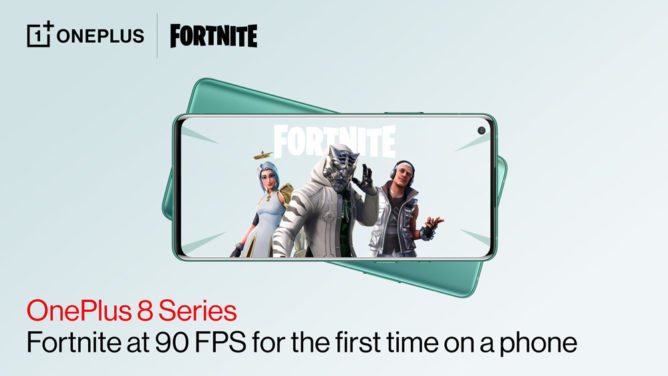 Most phones are only capable of hitting framerates of 30 or 60 FPS for Fortnite, so this is likely to be a well-received feature addition. It also shows how much Epic Games values mobile gamers, or rather how popular Fortnite is on mobile devices. Up to now, you'd need a PC or iPad Pro to manage 90 FPS or higher in Fortnite. Even the current console generation isn't this capable, and graphical fidelity clearly isn't everything in the world of battle royale shooters.

Unfortunately, OnePlus 7 and 7T series phones with 90Hz displays are still only able to reach 60 FPS with Fortnite, but this may change in the future. If you use the OnePlus Game Space app — which was just updated with custom Instant Games — you can install Fortnite with "One Touch," a feature that coincides with the launch of the game in India.

Earlier this year, Epic Games added a high refresh rate option for Fortnite on Android, but the feature was only available on OnePlus devices. Well, it would appear Epic has struck a new deal, but this time with Samsung. Starting tomorrow (October 12th), Fortnite fans will be able to play at 90Hz on the Galaxy Tab S7 and S7+. Of course, if you're wondering how the game performs on mobile at such a high framerate, I actually covered the performance on the OnePlus 8 back in July (2020), and while it's clear the game's graphics take a hit, the buttery frame rate is still a sight to behold.

So if you'd like to get your hands on Fortnite in preparation for tomorrow's update, you can grab the install directly from the Samsung Galaxy Store (after all, Fortnite was removed from the Play Store a couple of months ago). You can also grab a copy directly from Epic, though there's no word if this version will receive the 90Hz update for Samsung's newest tablets, but it probably will.

Win one of two Google Pixel 4a phones from Chargeasap (Update: Winners)

Huawei sets the date for next week’s Mate 40 unveiling