Google hasn't released an updated smart thermostat since the Nest Thermostat E in 2017, but a new one is coming in just a few weeks with a simpler design and a lower price tag. You can pre-order the new thermostat today in four great colors for a mere $129.99. That's $40 less than the Thermostat E and $120 less than the 3rd Gen Nest. Despite what you may have heard, there are no Soli-based gestures. There is a Soli sensor inside, but it's just for motion detection.

The minimalist redesign looks very nice, at least in renders. We have yet to see how it looks in real life, but the redesign wasn't just about looking good—Nest also worked to make the device cheaper. The iconic rotating ring from older Nests is gone, replaced by a touch-sensitive zone on the edge where you can swipe and tap to navigate the interface. That helps to keep the price down, as does the decision to drop the included trim kit (the thing that covers up ugly walls around the thermostat). Nest says most people prefer to tidy up the wall, so the color-matched trim kits are now a $14.99 optional add-on. 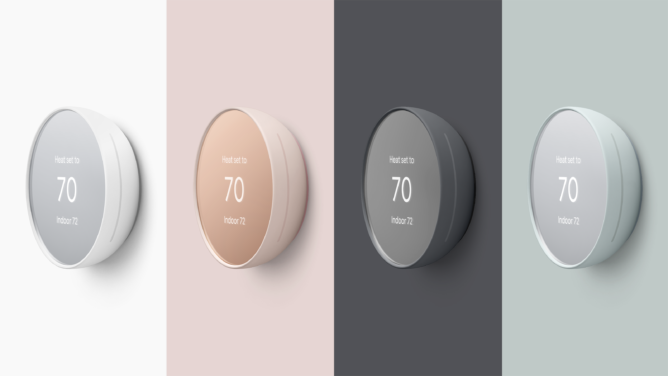 The new unit still works without a C wire, but it gets there a bit differently than past Nests. Instead of the internal (and expensive) rechargeable battery, the new Nest has two AAA batteries. These are user-replaceable and should last a year or two in most systems. Like the Thermostat E, the new Nest should work with about 90% of homes. However, those with unusual HVAC setups will need to get the more expensive 3rd Gen unit. You'll also need the 3rd Gen if you use Nest Temperature Sensors around the house as they don't work with the new model.

This is also the first Nest Thermostat that operates entirely in the Google Home app—it won't even appear in the Nest app. All the learning and scheduling features will be in the Home app, so there will be none of that straddling two apps nonsense like the Nest Wifi or Nest Hub Max. The company isn't confirming anything yet, but I imagine the current Nest app is not long for this world. 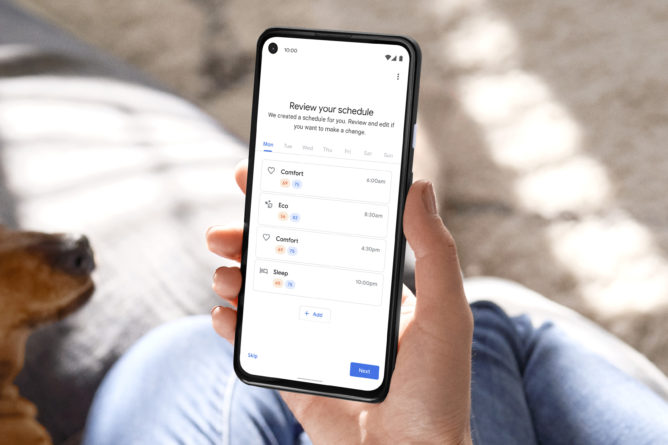 While the new thermostat doesn't technically replace either of Nest's existing models, it's effectively taking over the budget end of the spectrum from the Thermostat E. Going forward, the Thermostat E will no longer be a consumer product. Nest will instead make the E exclusive to Pro installers. The Nest 3rd Gen will continue on as the "flagship" thermostat with more features and wider system compatibility, at least for now. You can pre-order the new Nest Thermostat today for $129.99. Google doesn't have a specific ship date but says it will be within the next few weeks.