The processing power common to flagship phones means you can expect mobile games to run smoothly on them, but for most devices, that gaming prowess is an afterthought or an added bonus. The ROG Phone 3, launching soon in the US, pairs top-shelf internals with custom hardware and software tailored to creating an excellent gaming experience — and that laser focus on performance means it's great at other things we all use our phones for, too. But nagging flaws more expected from budget phones make it hard to recommend to any but the most ardent mobile gamer. 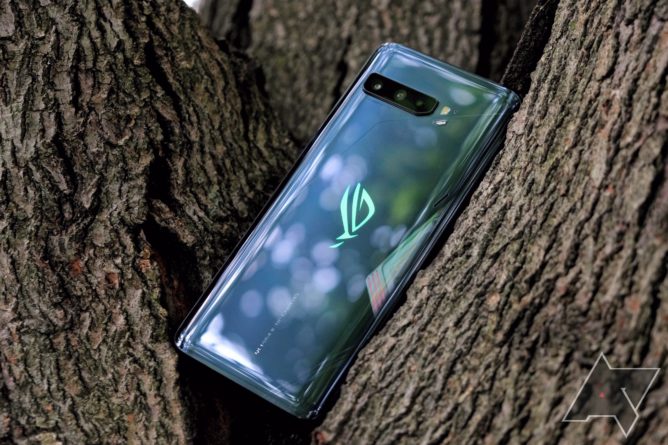 In the interest of transparency, I have to confess: I'm not big on the gamer aesthetic. I'd sooner my electronics look like they belong in my home than a garish neon spaceship. That said, compared to prior generations of ROG Phone, the 3 is surprisingly subdued in its design: at a glance, with its customizable light-up logo off, the phone doesn't necessarily shout "games!" But look closer, and you can't miss the funky camera module, the cooling vents, and the REPUBLIC OF GAMERS branding. Asus has learned to better straddle the line between playful and loud, and I appreciate that. If you really want to up the 1337 factor, you can set the RGB ROG logo to light up in practically unlimited ways. 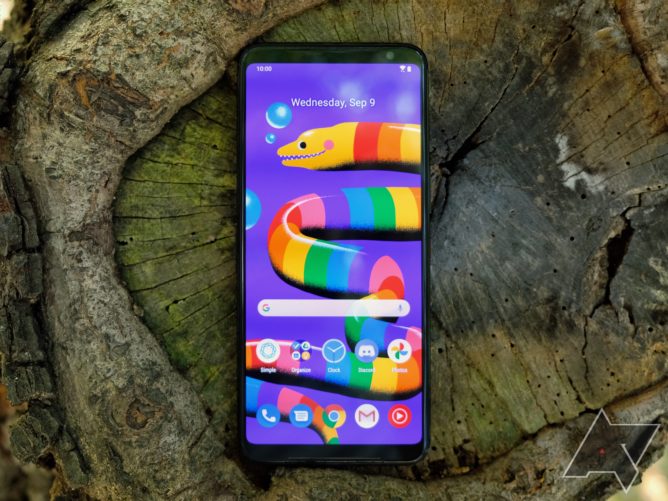 Around front, there's a big, 6.59-inch display. That size strains the limits of 1080p's viability on a device you'll be looking at all day; I would've liked to see 1440p. Still, it's sharp enough unless you're really looking for flaws. More notable than its resolution, the display's refresh rate can be pushed all the way up to a blistering 144Hz. Personally, past 90Hz, I think returns diminish pretty quickly — 60 to 90 feels like a huge leap, whereas 90 to 144 is practically imperceptible. But that's me, and the option is nice to have. You can let the phone choose its refresh rate dynamically depending on what's on screen or manually peg it to 60, 90, 120, or 144Hz.

The only real letdown in the ROG Phone 3's panel is that it's a little uneven; when it's dim, grays appear grainy. It's not something you'll notice very often, but it's a pretty amateur blunder, particularly for a device where the display is such a focus. 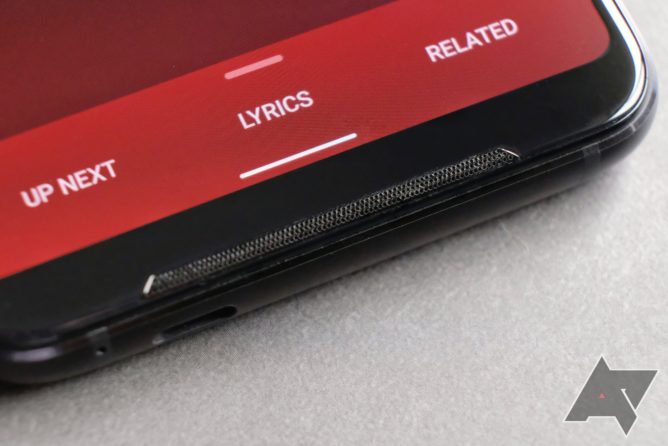 The large-for-2020 top and bottom bezels house stereo front-facing speakers, and they're wholly excellent — they sound better than some cheap laptop speakers, with plenty of bassy punch. I used the phone to listen to podcasts in my car when the stereo was on the fritz, and it was loud and clear enough that I didn't really mind. There's also a notification LED above the screen — a throwback a certain set of enthusiasts still go nuts for. 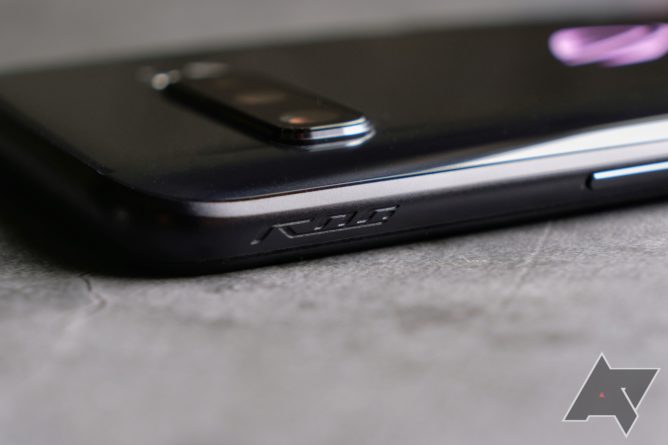 There are two debossed "ROG" stamps along the phone's right edge. These are Asus's trademark AirTriggers, pressure sensors that act as shoulder buttons during gameplay. You can adjust what each trigger does on a per-game basis, and even configure them to perform actions outside games (calling up the Google Assistant, for example). Shooters, in particular, benefit greatly from the addition; Call of Duty Mobile and Doom are considerably more fun on this phone.

The ROG Phone 3's got two — count 'em, two — USB-C ports: one off-center on the bottom edge, the other under a rubber flap on the left side. Having two ports lets you connect a charger and a USB accessory simultaneously, for when you need to juice up but don't want to unplug your earbuds or controller. The side port is also in a better location for charging the phone while you play games. In the monolithic triangular box, you'll find the phone itself, a powerful 30-watt charger with a very nice USB-C-to-C cable, and a thin case. There's also the AeroActive Cooler 3, an attachable cooling fan that makes use of the ROG Phone 3's secondary accessory port and adds a 3.5-millimeter headphone jack. The fan's value is questionable; my phone never got hot enough without it to limit performance, and running benchmarks in 3DMark with and without the fan on showed statistically insignificant differences.

It's entirely possible that the fan would have a more pronounced impact on prolonged performance — Asus says it can lower the phone's surface temperature by up to four degrees Celsius — but the ROG Phone 3 performs perfectly well without it already. The headphone jack it adds is a nice bonus, but the phone's considerable size coupled with the fact that it has no water resistance makes me think it could've been built in.

Asus more or less left Android alone here — if you choose the "Classic" software experience during setup, anyway. "Default" includes more gamer-oriented accents, like an icon pack that makes system app icons look like skeuomorphic buttons and a default wallpaper that looks like a close-up of a Bay-style Transformer. But I chose Classic, and nothing about the experience was distracting. One of my few software complaints is that the optional always-on display is incapable of showing notifications — it's just a clock. Sure, the phone's got a notification LED, but why not both?

'Classic' is pretty close to a stock experience.

There are a number of gaming-centric software enhancements built in, like the ability to silence different types of notifications while games are open. They've all got goofy Xtreme graphics, but they're often genuinely helpful, assuming you're playing games on this phone (and if you're not, you're probably using it wrong).

But for all the (frankly surprising) finesse in the ROG Phone 3's software, I've got one critical hangup: it's out of date. The phone will ship with Android 10 when it launches in the US, weeks after Android 11's debut. It's not unusual for budget phones to be behind on major Android releases, but a premium device running obsolete software from day one is a pretty big faux pas. What's worse, Asus wasn't able to tell me when users can expect the update.

Thankfully, though, the hardware is cutting edge: the ROG Phone 3 comes with the latest-and-greatest Snapdragon 865+. Asus tells me it'll be certified to take advantage of AT&T and T-Mobile's 5G signals in the US, but it's not compatible with CDMA networks — that means Verizon is out. My review unit is the model with 16 gigabytes of RAM. Pair that much memory with the 865+, and you've got a phone that's absolutely unflappable. It handles the most intensive multitasking and gaming I can throw at it without breaking a sweat. I wouldn't bother springing for the upgrade, though — the base model has 12 gigs, and even that is more than any mobile game can make use of.

Battery life is similarly stellar. I squeezed six hours of mixed-use screen time out of the 6,000 milliamp-hour cell with the display set to 144Hz. If you were intentionally conservative in your use and set the refresh rate to 60Hz, you could probably hit eight. I only wish wireless charging were an option — I think that would be more use to more people than the RGB lighting on the phone's rear. Wired charging is exceedingly fast, at least, thanks to the bundled 30-watt charger. 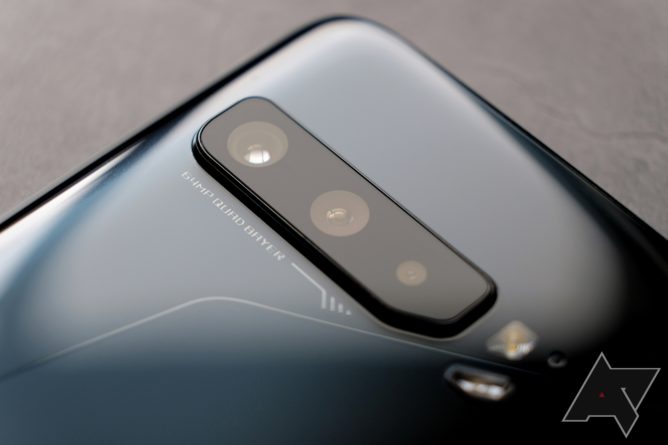 I didn't expect miracles out of the ROG Phone 3's triple camera setup, and I didn't get any. But it produces some surprisingly competent shots. Your Instagram followers won't think you have a Pixel or an iPhone — white balance and exposure are sometimes a bit off and low light performance isn't great — but detail and dynamic range are pretty spot-on in good light from both the standard and ultra-wide shooters. In keeping with modern smartphone design, Asus saw fit to include a low-resolution macro camera in the ROG Phone 3. You can get some okay shots with enough light — I love the picture of the bee below — but generally speaking, you'd be better off cropping in on a photo from the primary camera. Low-light photography is another weakness. In dim light, pictures are dark and blurry (like the one of my dog Leon in the first gallery above). There's a dedicated night photography mode, but it takes several seconds to capture a single image and the results are still pretty poor — see below. 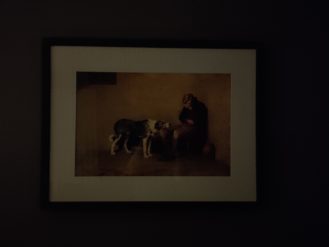 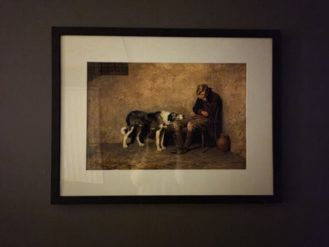 Overall, you definitely shouldn't buy the ROG Phone 3 for its cameras, but the photos it takes shouldn't stop you from buying it, either.

Asus ROG Phone 3
6/10
If you have to ask, no. To accommodate its gaming-oriented flourishes, the ROG Phone 3 forgoes modern conveniences like wireless charging and IP-rated water resistance. It's also running an old version of Android, and there's no indication of when it'll see an update. Your money would probably be better spent on something like the Samsung Galaxy S20+ or OnePlus 8 Pro. But if you were already interested, the ROG Phone 3 likely won't disappoint you. Its enormous battery and AirTriggers add legitimate value versus other flagships when it comes to gaming, and it does everyday phone things well enough to use full-time.

It's hard to say for sure whether anybody in the US should buy the ROG Phone 3, though, because Asus still hasn't announced how much it'll cost here. Both prior models started at $900 when they launched, so it's safe to assume it'll be at least that much — possibly more, thanks to the notoriously pricey Snapdragon 865+ it's packing. On paper, at $900, it's not a good buy for most people. But for a gaming enthusiast with the right expectations, it could be a great fit. 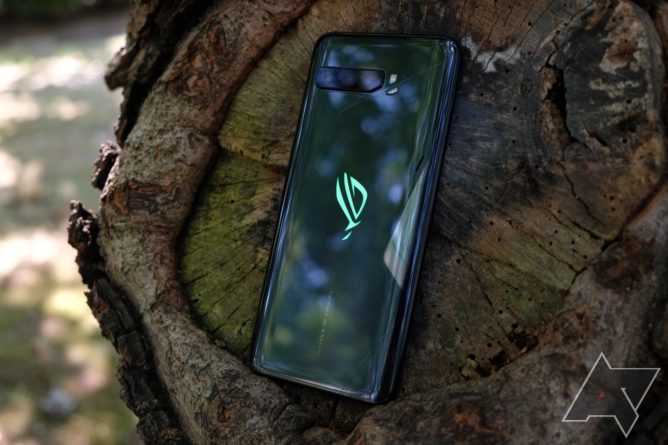 It's been a few weeks since I first tested the ROG Phone 3, and there have been new developments in the meantime. For one, we've learned that it starts at $1,000 in the US, $100 more than the previous two generations cost when they launched stateside — $1,100 if you want the unnecessarily beefy 16-gig model I used. The phone was already a dubious proposition at an assumed $900, but for four figures, it's hard to recommend anybody, gaming enthusiast or not, buy it. Yes, it's great for games, but so is every other phone in this price segment, and most people won't miss the shoulder buttons or attachable cooling fan. Other $1,000 phones are also all but guaranteed to be water resistant and offer wireless charging, and they probably take better photos, too.

Worse still, in the few months since the ROG Phone 3 was released internationally, it's already missed one monthly security update, and the two that it has received were notably late — the August 2020 patch didn't arrive until the end of September. It's currently sitting at a 5.5/10 rating on our update tracker, and its standing probably won't improve considering last year's ROG Phone II has missed seven updates.

For someone who lives and breathes mobile gaming and to whom price is no object, someone who doesn't care about getting increasingly common quality-of-life features and is unbothered by the prospect of their device missing security patches (to say nothing of OS updates), the ROG Phone 3 might still be a good purchase. I'm just not sure whether that person exists.