Google's Wear OS platform has had its fair share of ups and downs over the years—mostly downs. Perhaps the greatest issue has been slow progress on hardware. Most Google-powered watches sold right now use the Snapdragon Wear 3100, a two-year-old SoC built on the same 28nm process that the Snapdragon 800 from 2014 used. Qualcomm promised to finally address battery life and performance limitations with the new Snapdragon Wear 4100 chipset, and the TicWatch Pro 3 is the first Wear OS smartwatch to use it.

After using the TicWatch Pro 3 for a while, I can confidently say that the Wear 4100 is the hardware boost Wear OS has desperately needed for years. However, the TicWatch still isn't a perfect package.

The TicWatch Pro 3 is definitely a large watch, with a diameter of around 48mm and a depth of 12.2mm. That makes it slightly bigger than the Fossil Gen 5, 45mm Galaxy Watch3, Skagen Falster 3, and nearly every other smartwatch currently available for purchase. However, it's lighter than most other large watches, at just 42g. For comparison, the 41mm Watch3 is 49.2g, and the 45mm model is 53.8g. The lower weight helps the TicWatch feel less cumbersome, though it's still probably not a good option for people with smaller wrists. 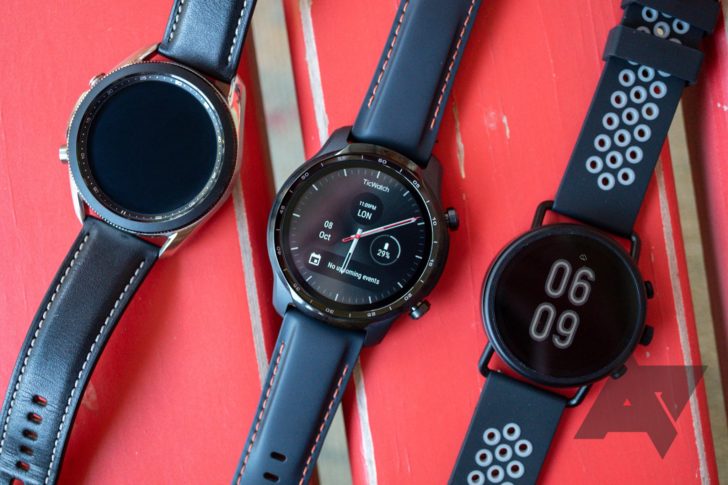 Mobvoi sent me the 'Shadow' color for review, which has a nice understated design. There are still numbers etched into the screen bezel, which isn't my favorite look, but they don't stand out as much as the numbers did on the original TicWatch Pro. There are two physical buttons on the side; the top one serves as the home button (holding it down will open Assistant), and the bottom key can be customized to open any application. The other side of the watch has a single speaker, so you can make voice calls or listen to responses from Google Assistant. My number one complaint with the TicWatch Pro 3 is that there is no physical dial for scrolling. The Galaxy Watch3 has a fantastic rotating bezel, most of Fossil's watches have a dial on the side, but the TicWatch has nothing. Scrolling through menus has to be done by swiping on the display, which is slower and results in more accidental taps.

The most unique hardware feature is the 'Dual Display 2.0,' which gives the TicWatch two screen panels — a standard AMOLED screen on the bottom of the assembly, and an LCD on top that resembles what you would see on cheaper digital watches. You can either use the LCD screen as a replacement for the regular Wear OS ambient mode (which is the default behavior), or you can switch the TicWatch into 'Essential Mode,' which shuts down the smartwatch components entirely and just gives you the time and steps with the LCD screen. The TicWatch Pro 3 supposedly lasts up to 45 days on a single charge in Essential Mode. 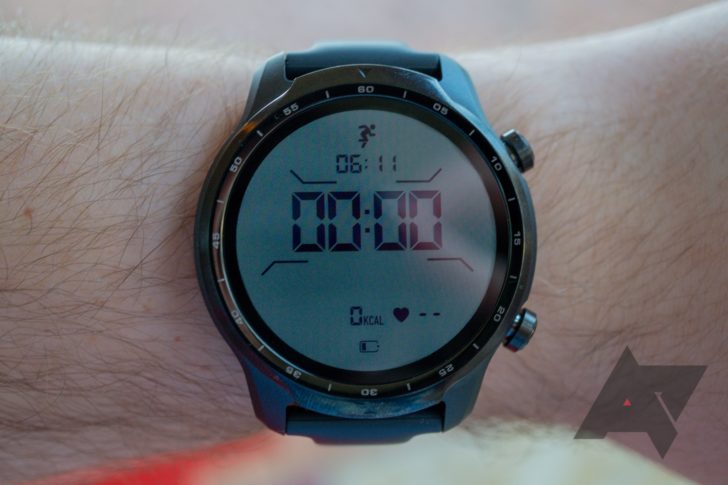 The second display is interesting, but I never found it particularly useful. The LCD screen isn't any more readable in direct sunlight than the regular AMOLED panel, and it doesn't show notifications, so you have to press the side button to fully wake the watch to see alerts or access media controls. I found this so annoying that I ended up reverting to the regular always-on screen functionality in Wear OS. Even when you don't use Dual Display, it creates a slight haze on the main AMOLED — most people probably wouldn't notice it, but it was obvious to me after using a Galaxy Watch3.

Mobvoi includes a single wrist strap in the box, which is made of silicone, but looks like a leather band — it looks fine, but I would have preferred separate leather and exercise bands in the box. You can replace it with any standard 22mm watch band, which is the same size the largest Galaxy Watch3 uses. There's also the USB charger (with no wall adapter) and a user manual in the box.

The TicWatch Pro 3 runs a standard build of Wear OS. You can see notifications from your phone, track workouts away from your phone with the integrated GPS, use Google Pay, and ask Google Assistant questions. This is the first Wear OS watch I've tried in a long time that doesn't periodically fail to load responses from Assistant, which was a huge headache on other wearables. 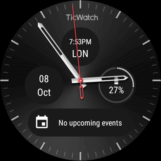 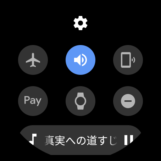 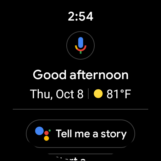 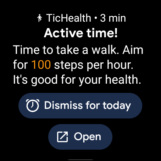 Mobvoi hasn't implemented anything like Fossil's battery modes or calling compatibility with iOS, but it has changed the app list to a grid of icons that you can move around. I'm not sure if this is an improvement, since you see the same number of icons on either design (and Wear OS already allowed you to pin apps to the top), but at least it's not a downgrade. 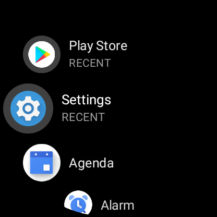 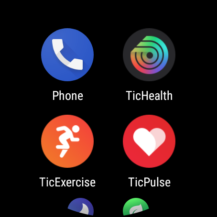 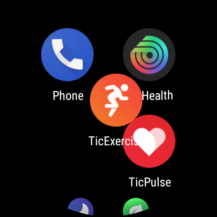 Most of the unique software features of the TicWatch are in the custom apps. Google Fit is so inadequate that Mobvoi has built its own 'TicHealth' software, comprised of apps for tracking physical activity, sleeping, and heart readings. However, you'll need to install the Mobvoi app on your phone to see most of the collected data, and there's no automatic workout detection. TicHealth's data can also be synced with Google Fit, Strava, and Runkeeper, if you want better integration with non-Mobvoi devices and services. You can also choose to ignore all of Mobvoi's apps and just use Google Fit.

Performance on the TicWatch Pro 3 is excellent. This is absolutely the fastest and most responsive Wear OS watch I've ever used, thanks to the Snapdragon Wear 4100 chip. It gives Samsung's Galaxy Watches a run for their money in that regard. The smoothness is also partially due to the higher refresh rate on the screen — while all Wear OS watches (that I'm aware of) run at 45Hz, the TicWatch Pro 3 operates at 60Hz. I still would have liked to see Mobvoi use the Wear 4100+ chip, which has a co-processor for even better battery life and a few added features, but the 4100 alone is a significant upgrade from the chips in other Wear OS devices.

Battery life is also a high point for the TicWatch. Most Wear OS watches last me around two days on a single charge, with everything on (NFC, GPS, always-on display, health tracking, etc.), but the TicWatch Pro 3 reached nearly four full days with the same usage. When I switched from Dual Display mode to the regular always-on display functionality, it dropped to around 3.5 days, but that's still impressive.

Unfortunately, the improved hardware on the TicWatch only highlights which parts of Wear OS can only be fixed by Google. Assistant finally works properly, and Wear OS still handles notifications well, but app support from both Google and independent developers have stagnated. When I set up the TicWatch for runs, I realized there's no official way to download music, now that Google Play Music is dead and YouTube Music doesn't have a Wear OS app yet. Wear OS also hasn't received a significant feature update since Tiles arrived in May 2019.

Yes, if you don't want a Galaxy Watch. The TicWatch Pro 3 proves that the Snapdragon Wear 4100 is a massive step forward for Wear OS watches. Samsung's Galaxy Watches are no longer the only options if you want an Android-compatible smartwatch with great performance and multi-day battery life. However, Google still needs to work on the software side of Wear OS if it wants to fully catch up with Samsung and Apple wearables.

The TicWatch Pro 3 is a capable smartwatch, but the Dual Screen functionality isn't as useful in real life (at least to me) as it might seem in advertisements. The price is also a bit high at $299.99. You can get a 40mm Galaxy Watch Active2 for $50 less, and other Wear OS watches regularly go on sale for closer to $200.

The first wireless earbuds from Devialet look cool, but they're not cheap