Google already has an in-car navigation UI in the form of Android Auto, as well as a future replacement in the form of the Assistant Driving Mode, but it seems to be implementing a very similar concept in Google Maps. We've seen music playback controls show up in Maps navigation before, but never the Android Auto-style buttons and home screen.

The interface in question looks a lot like Android Auto's view, but differs in that it's based entirely out of the Maps app. The bottom has two buttons in the navigation mode — one for voice and another for a "home screen" of sorts — with a third Maps icon appearing if you're not on the actual navigation screen as a quick way to return to it. Right above that is your music playback, which sports large text and buttons to help you keep your eyes on the road. Everything above that is just the standard Maps navigation UI we all know.

Tap the home screen button and you're brought to an intuitive screen where you can reach all your essentials — calls, messages, music players, and podcast apps. The "Calls" screen contains your top three contacts and three most recent calls, with a "Call someone else" button that presumably brings you to your actual dialer. There's a dedicated interface for YouTube Music with what Google deems to be essential as well.

This new interface's existence is a bit puzzling; it seems to serve virtually the same function as the Android Auto phone UI, minus the ability to use Waze as the navigator. We already knew that Android Auto's phone UI would be getting replaced by the Assistant Driving Mode, but despite looking similar, this isn't quite that either. Assistant Driving Mode was announced over a year ago with no ETA provided, and we haven't heard anything about it since.

The new Maps navigation mode doesn't seem to be fully deployed just yet, but it's reached a few readers and at least one member of the AP staff. Unfortunately, we don't have an APK that we can share, as it seems to be a server-side switch that Google is playing around with. Let us know below if this has shown up for you while navigating someplace.

9to5Google dug through the latest Google app beta, v11.31, and was able to get the setup screen for what looks to be Assistant Driving Mode. The graphic within the screenshots depict a UI that is very, very similar to the ones we've seen above. 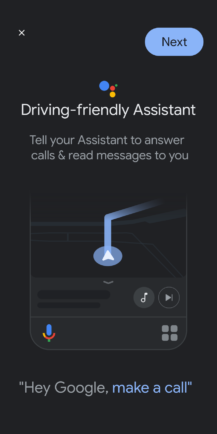 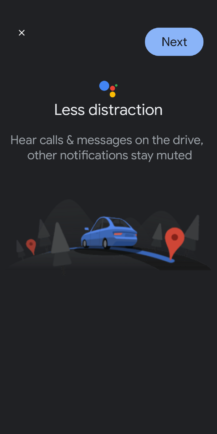 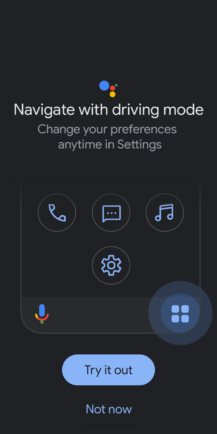 XDA's Mishaal Rahman was also able to get these setup screens to show up, so there's definitely something brewing here. Could the year-plus-long wait for Assistant Driving Mode finally be coming to an end?