If the Pixel 4a 5G or Pixel 5 will be your first foray into America's emergent 5G networks, you'll want to know where you can take the phone you've bought — especially if you're buying it directly from Verizon. So, let's get to sorting those airwaves out.

All Pixel 4a 5G and 5 units will be able to hop on the most common type of 5G network where spectrum is located at or below 6GHz or "sub-6" as it is known. However, all U.S. Pixel 5 (model ID GD1YQ) and Verizon-sold Pixel 4a 5G (G6QU3) units will also be able to access high-band millimeter wave spectrum — supercharged throughput with extremely limited coverage.

If you've purchased a Pixel 5 in the U.S., you'll be able to access both sub-6 and mmWave if you're on AT&T's (including Cricket Wireless and FirstNet) or U.S. Cellular's (sub-6 now, mmWave later) network. 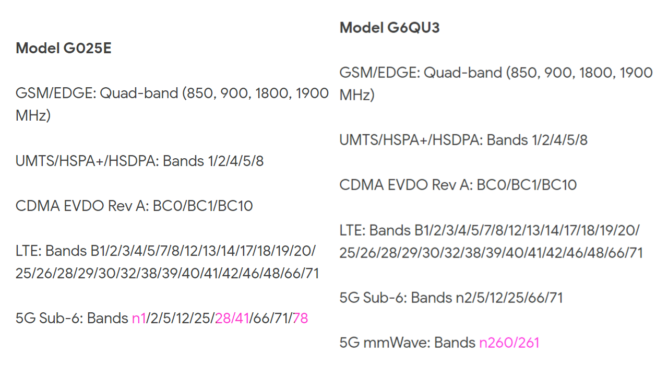 The Verizon Pixel 4a 5G supports both its mmWave and eminent sub-6 networks, but is listed to not support any other 5G network — theoretically, that shouldn't be true in many cases as the unlocked version only has four unique sub-6 frequency bands and shares compatibility on six others with the Verizon model. Google has acknowledged to us that users who bring the phone to another carrier may get it to work on some network bands. As it is, though, the device is certified for use only on Verizon.

As a sidecar and a nod to our international readers, you will be able to roam on other 5G networks if your SIM comes from Taiwan Mobile, T-Mobile Deutschland, and Vodafone in Germany, Ireland, Italy, and the U.K.

The network compatibility chart has been updated to reflect updated correct information from Google. Dish-owned T-Mobile MVNO Boost Mobile, which was originally listed on the chart, has been taken off the list.

Our original report pointed out several discrepancies in the listings, including: in the case of T-Mobile (and Sprint), the Pixel 5 only supported sub-6 5G, but their dependent prepaid carriers Boost, Google Fi, and Metro by T-Mobile list support for both mmWave and sub-6 spectrum; it's an inverted situation for Verizon, where MVNOs Charter and Xfinity list support for mmWave and sub-6, but Verizon only has an mmWave network running for the time being. Also; unlocked Pixel 4a 5G phones in the U.S. should be able to work on pretty much any carrier's sub-6 5G, but AT&T's FirstNet and Verizon's future grids were excluded.

Google acknowledged the discrepancies when contacted by Android Police.