As previously suspected, Google just silently launched an updated Google Wifi in the US. The new mesh router wasn't featured with the new Pixels, Nest Audio, and Chromecast during Google's Launch Night In event last week; instead, it's been unceremoniously added to the Google Store in the US and featured as a "new" item. That's understandable, though, as these Wifis are basically the same as the ones that were launched in 2016, and a step backward from the more powerful Nest Wifi.

On the outside, very little has changed about the Wifi's design in this new iteration, though 49% of its plastic weight is now made of recycled material. It retains its double-stacked cylinders shape, but the Google logo should now be embossed on the top. On the bottom, which you can clearly see in the diagram below, there's a new reset button (top circle) and a barrel jack adapter for power, in lieu of the original's USB-C port. Since you're not likely to plug and unplug these very often, and the power adapter ships in the box, the regression doesn't seem all that catastrophic. 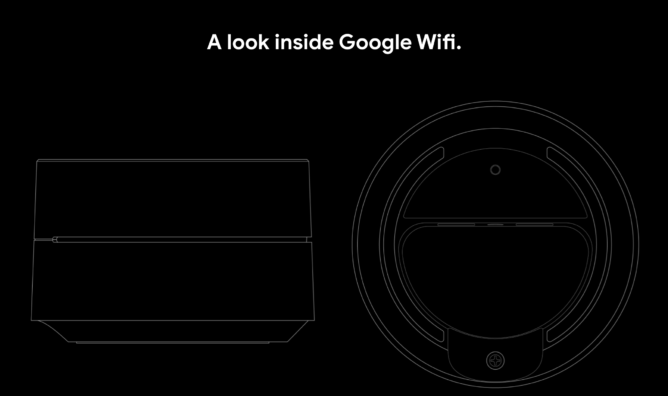 Spec-wise, you're still looking at dual-band 802.11a/b/g/n/ac Wi-Fi, Bluetooth Low Energy, WPA3 encryption, and up to 1500 sqft of coverage per mesh point. It still runs on an unnamed quad-core processor with 512MB of RAM and 4GB of eMMC storage, requires 15W of power, and offers two Ethernet ports. Given those similarities, you should expect the same performance as the original Wifi, but with Google Home app compatibility.

Google is positioning this new Wifi as a lower-end alternative to the Nest Wifi, with less power and coverage and no smart speaker or Google Assistant on board. Plus, the former uses the same hardware for the main router and secondary points, whereas the latter has distinct units for routers and points. You can see the differences between the two offerings in the table below. The two systems are notably compatible with each other, so you can always add a Google Wifi point to an existing Nest Wifi system if you want to expand your network without paying too much. 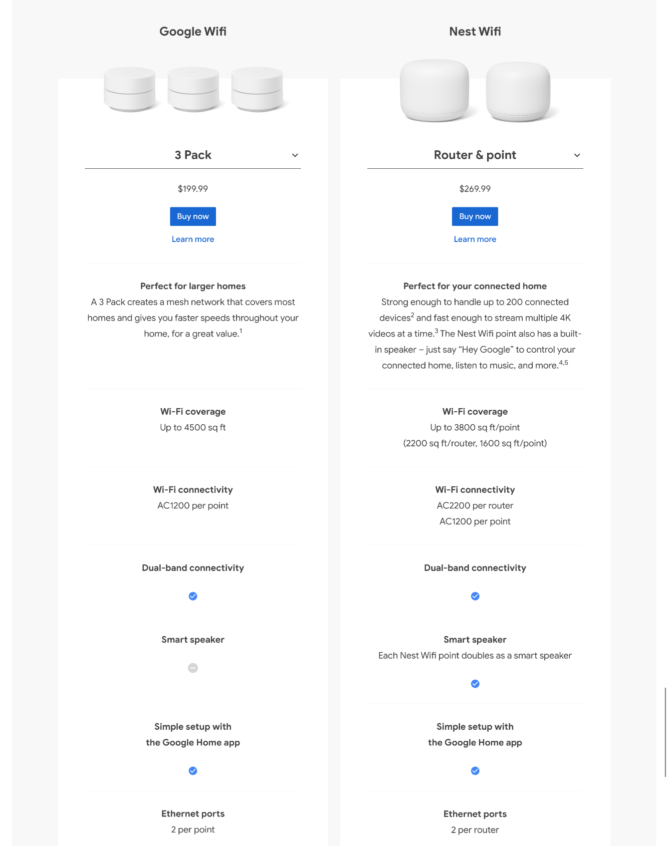 With Google moving most of its smart home offerings under the Nest brand, it's a bit awkward to see a "new" (well, more or less) product launch under the general Google brand, and even more awkward to see two distinct "Wifi" products with different parent branding. It would've made sense for this new router to come as a Nest Wifi lite or mini, but who are we to argue with Google's branding wisdom.

You can grab a single Google Wifi puck for $100 from the Google Store in the US — other countries don't have it yet. It should ship right away. A three-pack is advantageously-priced at $200, a $100 savings versus buying the units separately.

First, both Google and Nest Wifi systems will start alerting you when a new device joins the network, so you can act quickly if an untrusted device manages to sneak in. You can turn off the notifications in the Google Home app by going to Settings > Notifications > Nest Wifi > New device notifications and toggling it off.

Second, the two systems are also getting a firmware update to v13099.94.9 with several improvements listed in the changelog below:

9th Dawn III, a deep and engaging action-RPG worth the asking price