Zeiss may partner with Nokia now, but the photography company still makes standalone cameras of its own. The Android-powered ZX1 was first announced back in 2018, but it failed to meet its early 2019 launch date. Now it looks like the camera is actually coming soon — and it's got an eye-boggling price tag to boot.

For $6,000, the Zeiss ZX1 gives you a fixed 35mm Distagon F2 lens and a 37.4MP sensor to work with. While those specs are questionable at this price point, the ZX1 has a unique trick up its sleeve: it runs Android. That's right — you'll be able to run your favorite mobile operating system on the ZX1's 4.3" 720p display panel.

While it isn't the first camera to utilize the Android OS, Zeiss is said to have partnered with Adobe to make sure that Lightroom CC is available to run right on the camera itself. That does sound kinda neat — until I remember that this screen is smaller than the iPhone SE's display. Does anyone really want to try editing photos on a panel this tiny? Apparently Zeiss thinks so, and it also thinks people are willing to shell out 6,000 bucks for the convenience. 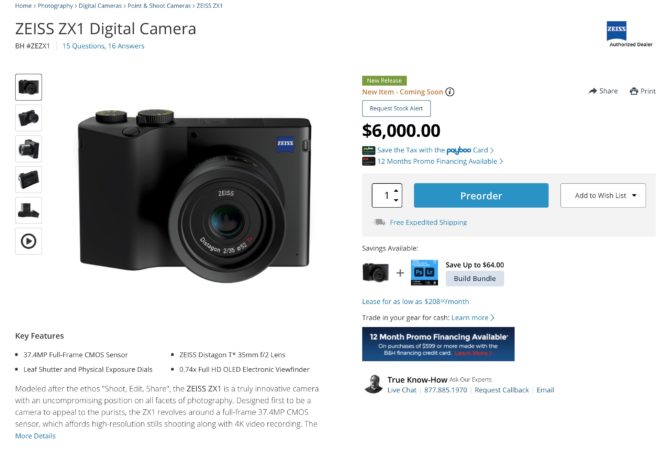 There's no word on the exact availability of the ZX1, but according to an email sent out by B&H Photo, the Android-powered camera should be coming soon. I'm guessing it probably won't be running Android 11, though.