Again, this isn't actually a change in Google's policy, the company is simply going to start enforcing its existing policies more strictly going forward, and refined language will more concisely and correctly express that policy. While Google does grant exemptions in the case of physical products or digital content that can be consumed outside the app itself, the new language should make the precise nature of these exemptions more clear. Unfortunately, Google didn't actually include the changes it expects to make in the information it provided us, but we have to assume it will be up at this page soon. 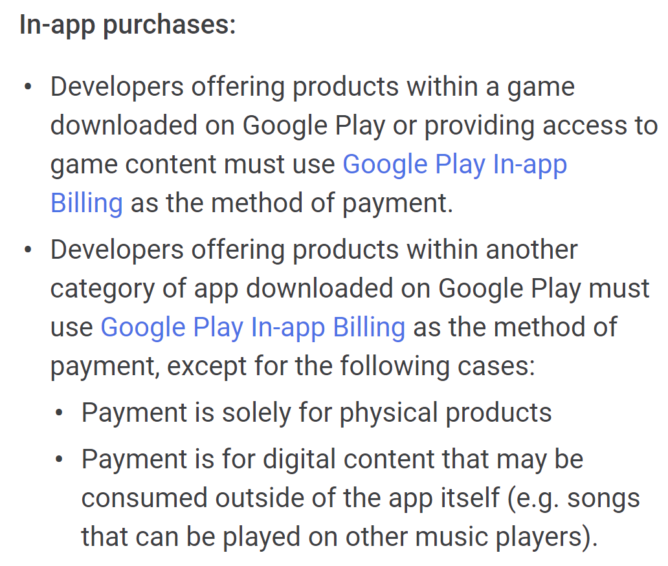 Screenshot of Google's prior exemptions.

Google claims that this renewed enforcement will affect less than 3% of developers since the vast majority already use Google's in-app billing for such purchases. Furthermore, the company is pushing out the date it plans to start enforcing its rules until September 30th, 2021, giving developers plenty of time to integrate the required changes, especially in light of how difficult the work might be these days.

Google is also imposing this requirement on its own apps going forward — apparently, not all of them used the correct in-app billing system either. Ostensibly, this change is to make it clear Google treats all developers equally and fairly, though given big names like Spotify and Amazon (via Kindle) have flouted these rules in the past without punishment, and given Google has a history of cracking down harder on smaller independent developers for minor (or even non-existent) infractions, I'll take those claims with a grain of salt.

In its announcement, Google reminds developers that they still have a choice when it comes to app distribution, and using Google's in-app purchase model is technically optional, as developers can use third-party app stores or even self-distribute apps, unlike other platforms like iOS. While that does ignore a significant difference in viability, since Google has exclusive arrangements with several manufacturers to distribute its own store, it is technically true.

The change in payment policy likely won't be popular with most developers, but firms based in India are especially upset over the move. More than 150 companies in India are forming an alliance against the payment restrictions, and the group is currently exploring creating an alternative app store.

In response, Google has announced that it will postpone the in-app purchase requirement in India by a few more months. "We're extending the time for developers in India to integrate with the Play billing system," the company said in a blog post. "For all apps that are yet to launch, or that currently use an alternative payment system, we set a timeline of 31st March 2022." Google also said it is setting up sessions with "leading Indian startups" to hear their concerns.

Pixel 2 and 2 XL reach end of life: Only one more update is planned