Samsung's top-end phones are getting more and more expensive at an alarming rate, as evidenced by the fact that very few people bought an S20 during the series's launch window. Seeing the gap to fill between bargain-bin budget phones and outright luxury devices, this week, Samsung launched the Galaxy S20 Fan Edition. It costs $700 (currently $600 on sale), and it packs a ton of features we're used to seeing in flagships with very few compromises. This might just be the best phone of the year. 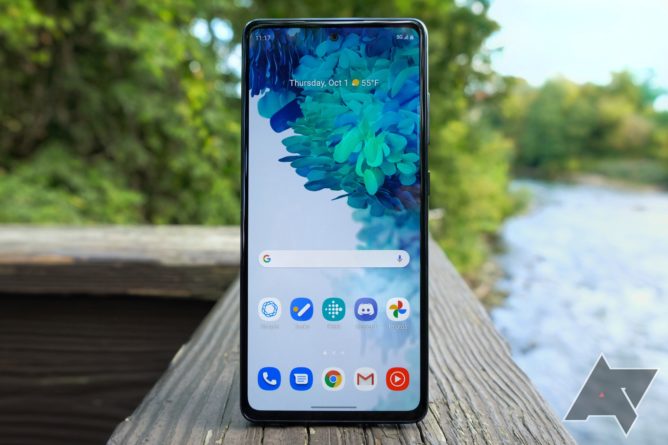 The Galaxy S20 FE looks like a Galaxy S20 with a dash of Galaxy A71. It's tall, with a 20:9 aspect ratio, and big: the screen is 6.5 inches diagonally, actually closer to the 6.7-inch S20+ than the comparatively compact 6.2-inch S20. There are slim bezels on all sides of the display — although they're not quite as slim as they are on other S20 phones, and the bottom one is a bit bigger than the other three — and a very small hole punch centered at the top to house a 32-megapixel selfie camera. 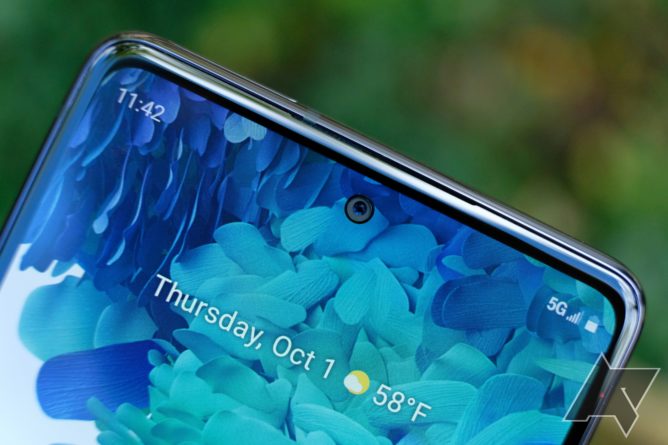 One of the less intrusive display cutouts I've ever seen.

The screen is 1080p, which is a bit of a bummer; at that resolution at this size, you'll be able to spot individual pixels if you're looking for them. But it's also 120Hz, and considering Samsung downscales its higher-resolution displays when they're set to high refresh rates, it's not that much of a loss compared to the other S20 phones. Beneath that display is an optical (not ultrasonic) fingerprint sensor that's just this side of okay: it recognizes my prints often enough, but it's a half a beat slower than the best scanners I've used, like the ones in recent OnePlus phones.

Really, the most telling sign that this isn't a true flagship device is the plastic panel on the phone's back. But it's actually very nice — closer to the plastic used on the smaller Note20 than, say, the glossy stuff on the Galaxy A21. It's matte, does a reasonable job of repelling hand oils, and comes in six colors (you're looking at Cloud Navy here; there's also Cloud Mint, Cloud Lavender, Cloud Red, Cloud Orange, and Cloud White). The side rails are color-coordinated aluminum. 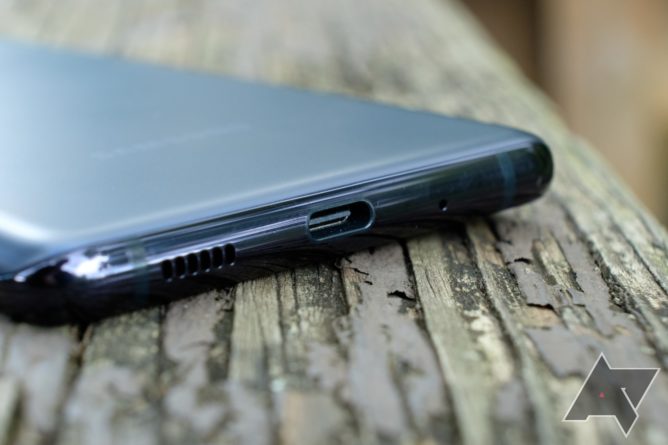 Even the finer details are right: the FE is IP68 rated, so you don't need to baby it. The phone's vibration motor, usually a pitfall for less-premium devices, is mercifully fine; it's far from the best Samsung offers, but it's not distractingly loud or mushy. Similarly okay are the phone's stereo speakers (one in the earpiece, one downward-firing). You won't want to listen to music on them, but they're absolutely adequate for speakerphone or a YouTube video.

In the box, there's the phone itself, a 15-watt power brick, and a USB-A-to-C cable.

Software on the FE is One UI as you know it — that is to say, colorful and occasionally overwhelming. There are also plenty of pre-installed apps you might not care to use, from Samsung's redundant suite of utilities to Microsoft apps like Office and OneDrive to Facebook and Netflix. But this is all par for the S20 course, and some of Samsung's flourishes, like the Edge panels that let you tuck apps away along the right edge of the screen for quick access, are genuinely handy.

The S20 FE performed extremely well during my time with it. And it should: its Snapdragon 865 is a stone's throw from the most powerful chipset available in Android phones today (that honor goes to the slightly faster 865+). Also thanks to that CPU, it's 5G-compatible on all major US networks — although only the Verizon-exclusive S20 FE 5G UW is mmWave capable.

There are six gigs of RAM on board, which has me a little worried about how the phone will hold up in two to three years. Eight would have been nice to see. Still, concessions had to be made to hit the S20 FE's price point, and I think going a little light on memory was a smart one: as it stands today, the phone handles day-to-day tasks, gaming, and multitasking perfectly well, and I didn't notice apps falling out of memory to an extent that slowed me down.

Battery life was also really impressive. On my heaviest day of testing, which involved a lot of 5G use and taking tons of photos, I managed just over five hours of screen time (at 120Hz). On normal days, I saw six to seven hours. If you dropped the refresh rate to 60Hz and were careful with your use, I wouldn't be at all surprised if you could wring eight hours out of the FE's 4,500 mAh cell.

You can charge the FE wired at up to 25 watts (although the bundled charger is only 15), or wirelessly at up to 15 watts. There's also reverse wireless charging up to 4.5 watts. 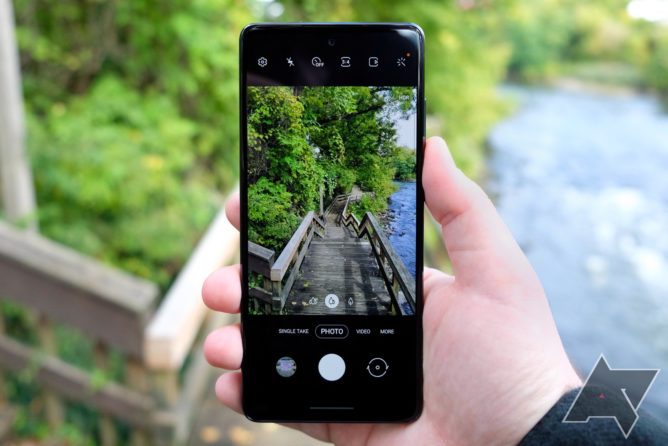 I don't love Samsung's image processing on the whole, and the S20 FE was not spared from the company's proclivity for wild colors and wonky HDR. That said, it's a very capable Samsung shooter. It's got three rear cameras: standard, ultra-wide, and 3x telephoto (something the standard S20 lacks), and in the right conditions, they can all get some great shots. The same photo taken from 1) the standard, 2) telephoto, and 3) wide lenses on a gloomy fall day.

When the light is just right, Samsung's tendencies to heighten saturation and sharpening make for really lively, dramatic photos (e.g., the fire hose hookup in the first photo below). In more challenging conditions, images can sometimes look weird and conspicuously over-processed (the creepy statue in the second). The versatility afforded by having all three of these lenses is really great, and means you can get decent photos from a wide range of distances from your subject. Samsung even goes so far as to advertise what it calls 30x Space Zoom — which is awfully rosy given the sensor under the 3x telephoto lens is only eight megapixels. As you'd expect, shots at 30x crop are pretty useless. This is the best I could do, after a lot of trial and error: 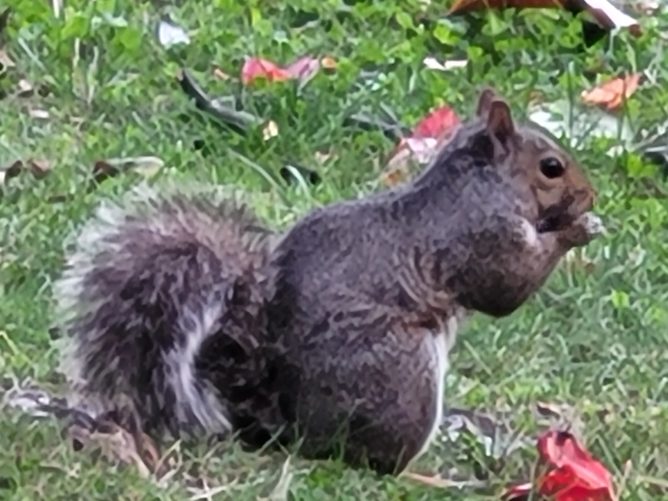 This is not a good photo.

What the zoom lens is surprisingly good for, though, is macro photography. The sensor is able to focus on objects just a few inches from the phone, and the result is strikingly clear extreme close-up photos. Using the zoom lens for macro photography is a lot of fun.

Like any Samsung phone, you shouldn't pick the S20 FE up expecting the best mobile photography experience. But it's not too far from the best Samsung's got to offer in that department, either, and the flexibility of its three-camera setup is great to have.

Samsung Galaxy S20 FE
8.5/10
Yes. In the S20 FE, Samsung says it aimed to distill what fans of the Galaxy S series love most about its flagships into a device that doesn't cost an arm and a leg, and I think it was resoundingly successful. Compared to the S20 (or S20+), compromises like the hit to RAM, the drop in resolution, and the plastic back seem mostly inconsequential next to the money you can save. And it makes the similarly-compromised Galaxy Note20 and its $1,000 price tag look downright foolish.

Samsung's image processing is an acquired taste, though, and even existing Pixel phones take better photos than the S20 FE, to say nothing of the soon-to-be-released Pixel 5, also priced at $699. That phone's got more RAM, too, and it's guaranteed to reach its end of life one OS version ahead of the FE.

Still, I have no reservations recommending the Galaxy S20 Fan Edition to almost anyone who doesn't care about having the absolute highest possible trim. Its price-to-features ratio is spot-on, and it's a well-deserved winner of our Most Wanted award. 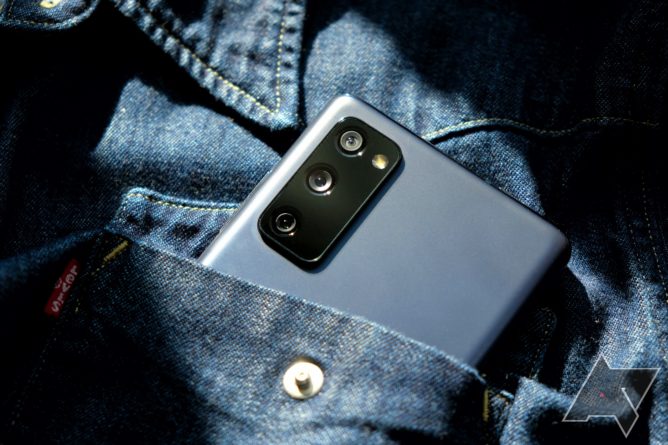