Back in March, YouTube TV was in danger of losing Fox Regional Sports channels from its service, but a deal was struck with owner Sinclair Broadcast Group that would extend the relationship. Most of its channels remained available long enough to offer regular-season coverage for the NBA, MLB, and NHL, but sadly the extension is coming to an end on October 1

As you can see from the message below, all Fox Regional Sports Networks will be removed from YouTube TV from tomorrow, and users also won't have access to any recordings they previously made from any of the affected channels. There's still a decent selection of sports networks on YouTube TV, such as ESPN, CBS Sports, NBC Sports, and the NFL Network, but many fans will miss Fox's regional coverage. 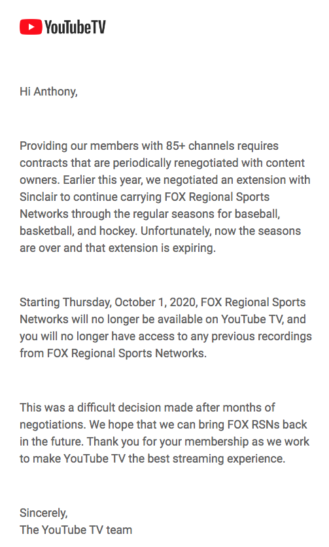 In the statement sent out to users, YouTube TV doesn't rule out the possibility of striking another deal with Fox Regional Sports Networks in the future, so we may well see them back again someday. In the meantime, you'll have to make do with some of the service's other content. You'll be able to do that on a new device soon enough, too, as Chromecast with Google TV is set to be announced later today. Tune in at 11:00 PT/14:00ET for more on Google's latest products.