Netflix is one of the most popular video streaming services out there. The app hit a billion downloads on the Play Store earlier this summer, and Google even included a dedicated button for launching the service on the new Chromecast with Google TV remote (to be fair, so does everyone). With the launch of the Pixel 5 and Pixel 4a 5G today, Netflix has confirmed that it will support streaming content in HDR10 on Google's latest phones.

The new Pixel 5 and Pixel 4a 5G both come with big OLED displays in FHD+ resolution. The phones themselves are capable of supporting HDR content, but that doesn't necessarily mean a lot unless there are apps enabling it. Luckily, Netflix has already updated its support documents with information that the service will support streaming in HD and HDR10 on the Pixel 5 and "Pixel 4a with 5G" devices. 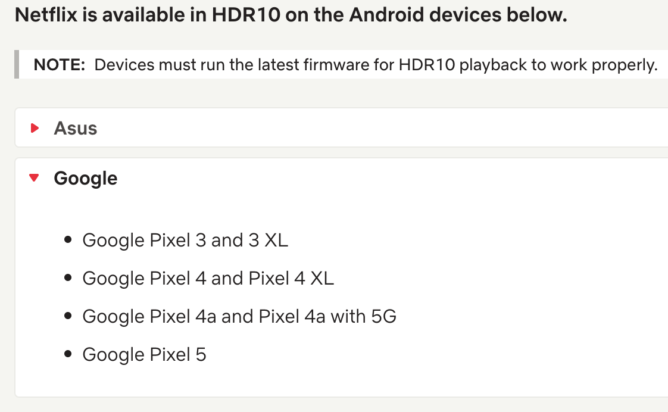 Now, I would never watch Netflix on a screen smaller than a tablet myself, but I won't judge you mobile movie watchers out there. And it's nice to know that Netflix is already committing to support high definition playback on Google's latest devices, even if the US release dates are still a while away. Whenever your 5G-capable Pixel arrives, it'll be ready to stream the latest binge-worthy newcomer to Netflix.