Leaks regarding the Pixel 5 were prolific in the lead-up to today's announcement, but two specific details left folks in the know confused: How could Google's phone sport a metal body and have wireless charging? Usually, you can't have both. Either a phone has a metal back, and you give the feature up, or another material is used that won't interfere with it — hence the rise of glass-backed smartphones. Well, the solution is pretty simple: Technically, the phone doesn't have both a metal back and wireless charging.

Google tells us that the metal body of the Pixel 5 has a window carved into its backside, something like that alternate-dimension Pixel 5 that leaked a week or so ago. The charging coil is embedded into that window (which we assume is plastic, though it could be something else) and coated in with what Google tells us is a "biocoat resin." The whole carved-out kit and caboodle is then paitned over to match, and from the back, it all looks like one continuous piece. 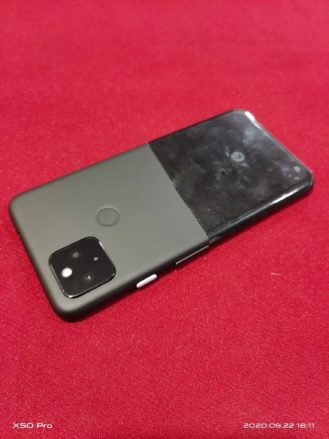 The two-tone frankenphone was an indicator for how things work.

According to specs for Google's Pixel Stand, the charging tech is as efficient as in prior Pixel phones, supporting up to 10W charging speeds.

Rumors regarding alternate wireless charging specifications or other outlandish explanations were all fantasies, and the truth is much more mundane. To quote both Sherlock and Spock, "If you eliminate the impossible, whatever remains, however improbable, must be the truth."