Xiaomi's Mi Band series has won fans by offering a lot of fitness features for not a lot of money. That formula isn't changing with the latest entry, the Mi Band 5. It looks almost identical to its predecessors but makes some notable improvements: There's finally magnetic charging so you don't have to pry the device out of the band anymore, the screen is a little bigger, and the tracking is a bit more accurate.

The Mi Band 5 might not compete with high-end trackers and smartwatches from Garmin or Fitbit, but it doesn’t have to. At €40/$50, it gives you a chance to try continuous fitness tracking and notification mirroring without breaking the bank.

Like the Mi Bands before it, all the Mi Band 5’s smarts are in the core. The core snaps into the included rubber band, where it's held in place firmly. I wouldn’t call it stylish, but it’s not offensive in any way. Thanks to the small size and weight, you shouldn't have any trouble wearing it 24/7. The band still uses a loop-and-clip mechanism and should fit most wrists, and there are some third-party options out there . The silicon itself is nothing special, but it's comfortable and strong enough, and it doesn't irritate my skin. 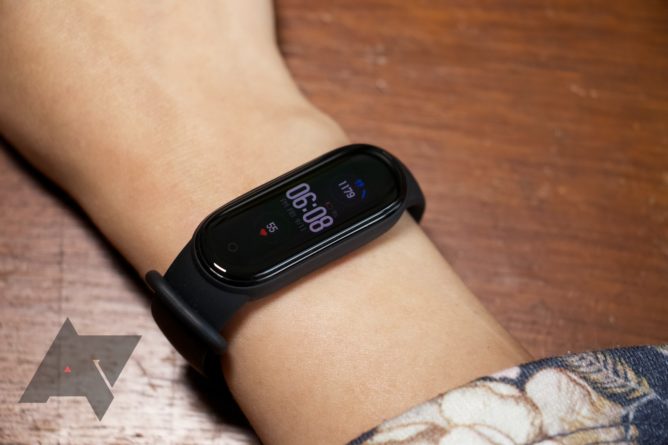 The band should fit most people, but it can look bulky if your wrist is particularly small.

When putting the Band 5 and its predecessor side-by-side, you'll instantly notice the bigger 1.1-inch OLED screen that fills out more of the ever-so-slightly taller body. Overall, the bigger screen fits the form factor nicely, making the interface look less cramped. Like the older model, it gets just bright enough for outdoor usage, though direct sunlight remains tough. 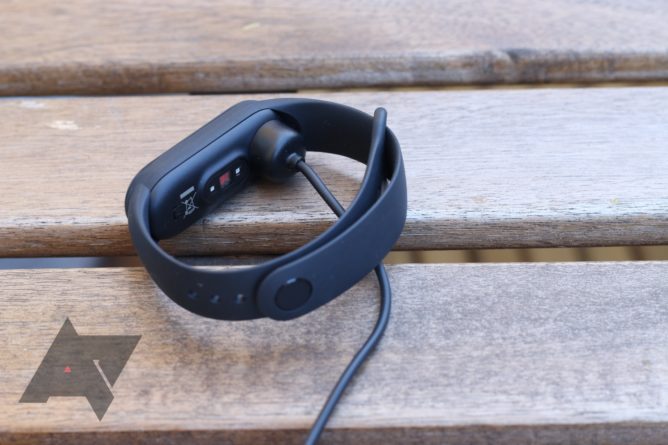 On the back of the Mi Band 5, you'll find the centered PPG heart rate sensor array in a slightly raised section. Above it, there are two pins which connect magnetically to the charger. That's a big improvement over the previous model — you had to pry it out of the rubber band to charge it every two weeks.

The box contains the Mi Band 5, the wristband, the charging cable with its USB-A plug, and a manual. There’s no wall adapter included, but you can plug the USB cable into anything with a free port. 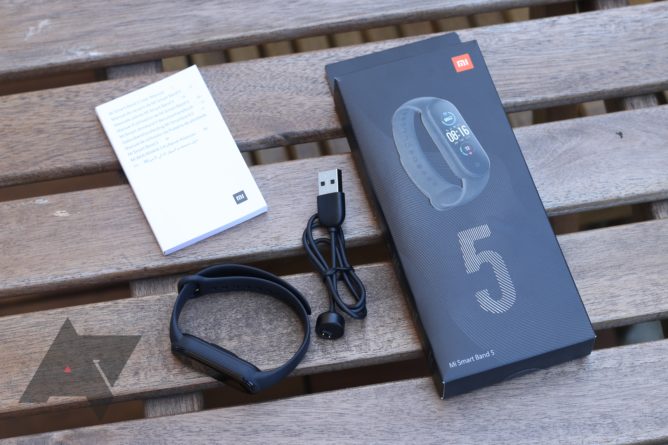 Setting up the Mi Band 5 is a snap. Once you've downloaded the Mi Fit app and created an account, you hit the plus button on the top right corner, search for your new band, and connect it. If you want to see call and app notifications on your Band, you'll also have to grant the Mi Fit app a few permissions: It needs access to your call logs, contacts, phone, storage, notifications, and Do Not Disturb (if you want to activate DND via the Band). For outdoor activity tracking, the app additionally needs background access to your location. Mi Fit will also guide you through the process of disabling battery-saving optimizations so you can receive notifications in a timely fashion. 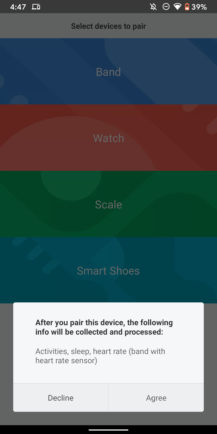 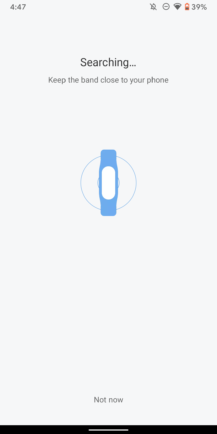 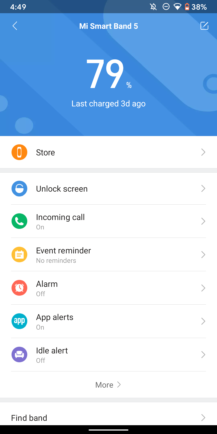 The Mi Fit app gets the job done, but like many Xiaomi apps, it suffers from tiny fonts, weird UX decisions, and unintuitive navigation. It's not all bad news, though. It's now possible to journal menstrual cycles in conjunction with the Band 5, and the app has gained Xiaomi's new PAI stat, the "personal physiological activity indicator." It's similar to Google's heart points or Fitbit's Activity Zone Minutes, giving you a useful overview of how much you've moved over a period of seven days.

The new band's interface won't be a surprise if you've ever used a Mi Band before. The slightly redesigned watchface shows you the time and the date alongside heart rate, step count, and the Band's battery status. If you don't like the look, you can switch it to hundreds of other designs.

You can access the menu by swiping up or down. There, you can sift through activity tracking, stats, alarms, settings, and more. Swiping left or right pages through notifications and music controls. Both of these menus are customizable through the Mi Fit app, so you can hide what you don't need. That's good since the standard menu consisting of 10 items can feel overwhelming, especially when you don't need access to breathing exercises, stress monitoring, weather, or your calendar. 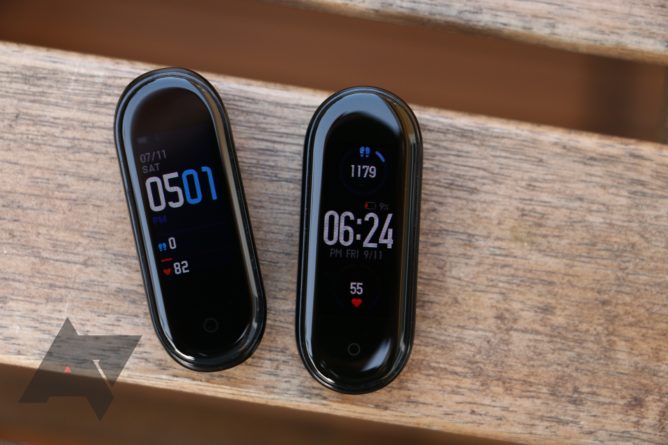 A tap on the capacitive button below the screen always takes you a step back until you reach the home screen, which is easy to get a hang of. If you don't want to use raise-to-wake, you can also tap that button to wake the screen. There are only minimal animations and no haptic feedback at all, but the interface is easy enough to navigate once you've figured it out. A bit more polish would still be appreciated—touch targets and fonts are often too small for comfort.

The Band 5 also debuts Xiaomi’s new stress-reduction features like breathing exercises and stress level monitoring, but it's not clear how exactly the band calculates your stress score. You also have to activate 24/7 tracking manually, so the company doesn't seem to be 100% confident in the feature. For me, the numbers seemed arbitrary and unhelpful.

Xiaomi has added REM phase detection this generation, and from what I've experienced, the Band 5 is much more accurate than its predecessor. It's mostly able to tell the difference between lying in bed and staring at a phone versus being in bed and asleep.

It's great to see that the Mi Band 5 (and Mi Band 4) got activity tracking with a firmware update in August, but it only recognizes walking and running (you can activate it through the settings on the band only). That's a bummer, since I've come to rely on automatic tracking while riding my bike when I use my Fitbit Charge 4. The Mi Band 5 has, however, gained five new trackable activities: elliptical, rowing machine, jump rope, indoor cycling, and yoga. Those join outdoor running, treadmill, cycling, walking, freestyle, and pool swimming.

The Mi Band 5 offers continuous heart rate tracking, but I've found it less reliable than the Fitbit Charge 4. Xiaomi often reported a much higher heart rate by as much as 15-20 beats, but of course, both of these bands are inherently less accurate than a chest strap. I still feel like the Fitbit's value is more on point — I can't believe that my heart rate is routinely at about 80 bpm when I'm just sitting in front of my computer. The Charge often reports a heart rate in the 60s at the same time. Interestingly enough, both devices calculated a resting heart rate of about 50-55 bpm, so it seems like the wild Band 5 readings are just spikes that don’t affect the average.

The Mi Band 5 seems pretty accurate when it comes to step counting, but no wrist-bound device can be 100% right. On a few days with particularly long walks, the Band and the Charge 4 only differed by around 1,000 steps (with a total of 17,000 steps on the Mi Band 5), and neither band gave outright unrealistic results. Xiaomi also gives you a detailed overview of when exactly you walked during the day, which is neat, but hard to discover in the convoluted app.

Battery life is great on the Mi Band 5. You can go for about 10 to 14 days depending on how much activity tracking you cram in, and that's with 24/7 heart rate, sleep tracking, and stress monitoring enabled. It's possible to up that to 20 days if you turn on power-saving mode, but then you'll lose all passive tracking features and raise-to-wake.

Yes. Like its predecessors, the Mi Band 5 offers great value at €40/$50 (imported through Amazon). It lacks elaborate automatic exercise tracking options, mobile payment options, voice commands, and onboard GPS, but all the basic features are there. There aren’t any glaring flaws, either. While I'm not 100% convinced about the accuracy of its readouts, it's good enough to give you a broad overview of how you're doing on a given day or during your workout, all while lasting almost a fortnight. 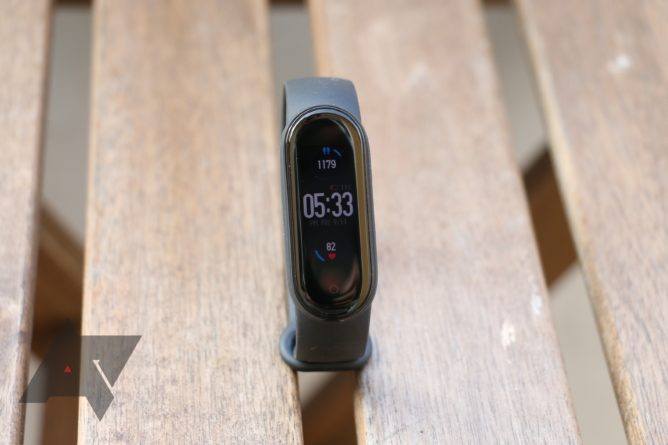 The review has been updated to reflect that the Mi Band 5 got automatic workout tracking with firmware update version 1.0.32.