In the span of a couple of years, true wireless earbuds have transitioned from being a luxury purchase to a commoditized, affordable product. Even within the category, features like USB-C or Bluetooth 5.0 that were once only found on expensive models have made their way to cheap sub-$50 buds. Now, active noise cancellation is going down the price echelon and the Tribit FlyBuds NC are a perfect example. $60 for a pair of TWS buds with a good sound seems too good to be true, but in reality, the FlyBuds manage to deliver on their promise without much compromise.

Close your eyes and try to picture the most generic true wireless buds you can imagine. That's exactly what the FlyBuds NC look like: black matte plastic, zero branding, no buttons, and an AirPods-like design. 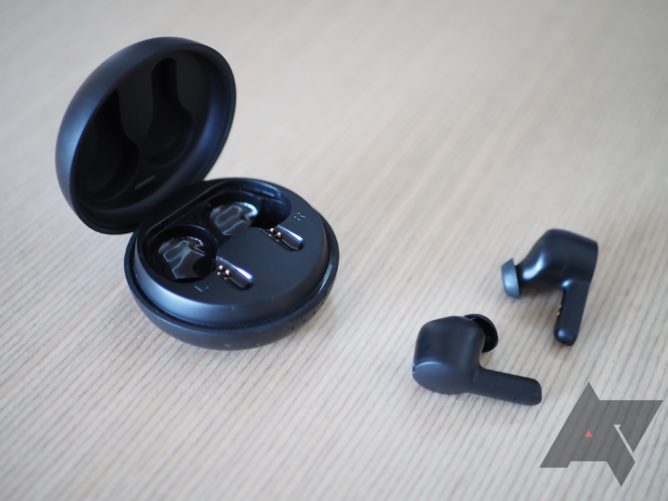 The only unexpected quirk is the relatively massive body compared to the shorter stem. The former is a side effect of the 10mm drivers Tribit managed to cram in, the latter plays a role in keeping the buds stable in your ear no matter how much you move. I have small ears and I'm always apprehensive of larger buds that either keep slipping out of my ears or cause discomfort after being worn for a few minutes. I'm positively surprised that neither is the case here. 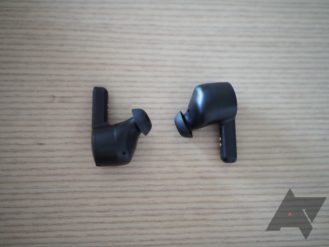 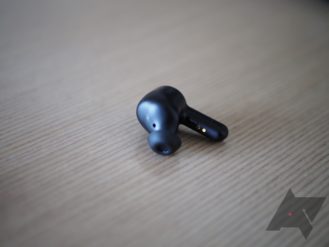 Looking closely, you'll also spot the four microphones needed for ANC on each bud, plus an LED light. The controls rely on touch. You can play/pause; answer, end, or reject a call; bring up your phone's built-in voice assistant; and skip to the next track. There's no way to rewind or control the volume from the buds, you have to take out your phone to do those.

By default, they always power on with ANC deactivated, but a tap-and-hold on the right bud cycles through three modes: ANC off, ANC on, and transparency. Tribit claims you can get up to eight hours with ANC, ten without. In my experience, that's closer to seven and nine, respectively, at mid-to-high volume. It should be a little less on maximum volume. 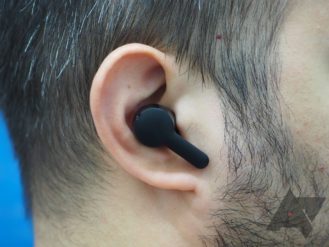 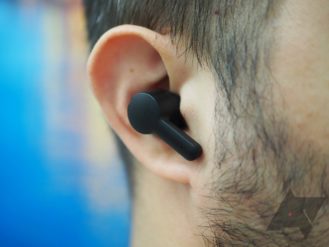 The two buds can be used individually and transition seamlessly between mono and stereo mode. They turn on and connect quickly when taken out of the case, but they can't be connected to two devices simultaneously. So if you want to use them with both a PC and phone, you'll have to manually disconnect one and connect the other.

The puck-shaped charging case is made of the same material as the buds, though it does feature a barely visible Tribit logo on top. The USB-C port sits on the back; there's no Qi charging, which is a little disappointing given the feature has made it to cheaper $35 buds at this point. The four LEDs on the case's front indicate its current battery level in 25% increments, but the left and right LEDs can also blink separately to show each bud's charging status, which I thought was a cool way to spot whether one bud was misaligned without opening the case. 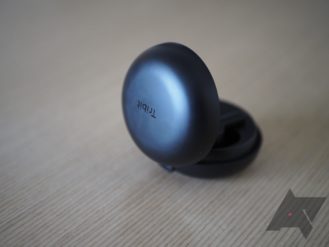 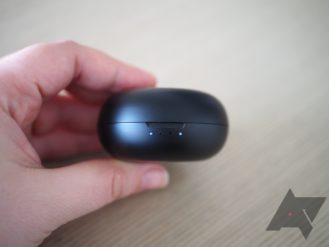 In the box, you get the buds, charging case, manual, short USB A-to-C cable, and five pairs of in-ear tips. I'm used to finding three sizes only, so the more granular choice is welcome here, especially when fit is essential for sound, stability, and noise cancellation. 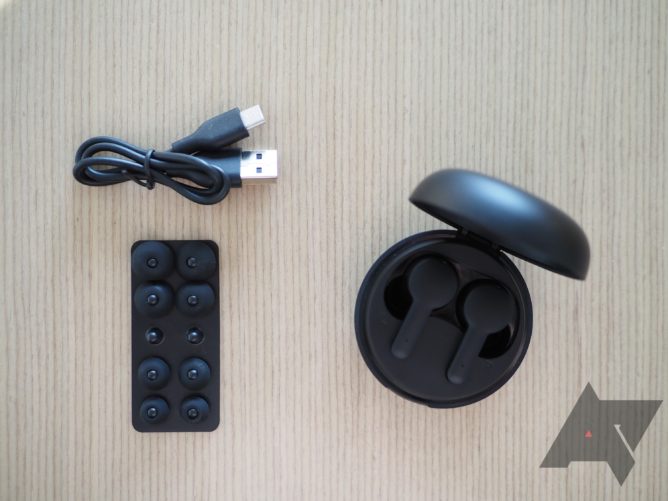 The FlyBuds NC surprised me when I first used them. They get plenty loud and I wasn't expecting such a decent bass, usually the first sacrifice made at the altar of low price. Lows are deep, thumping, and don't feel muddy. Even the $100 Anker Soundcore Liberty Air 2 don't come close. Mids are fine for casual listening, but a bit disappointing compared to the lows. The soundstage is smaller than I'd like and the highs less crisp, though they did improve a lot after a few hours of break-in, so if you get these, make sure not to judge them from the first listen.

The star of the show, however, is ANC — at least on paper. In reality, it only does a great job with low rumbling noises. I've been using the same loud motor and fan at work to compare all my ANC buds and earphones. The result here is about 80% noise reduction with nothing playing. If I play some music at low-to-mid volume, I can't hear the fan anymore. 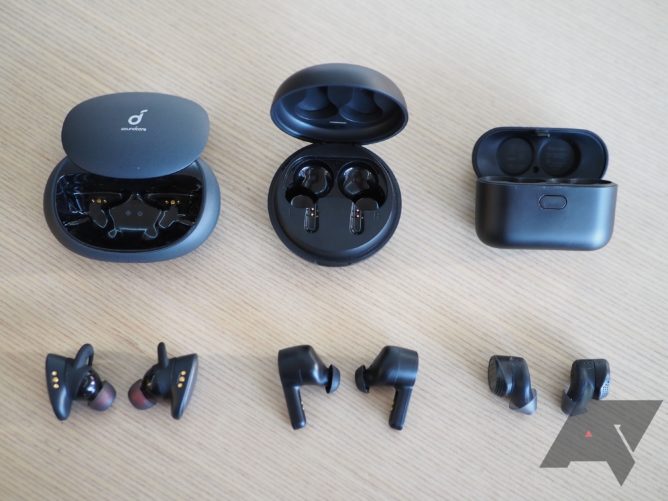 Less monotonous noises and higher/louder ones aren't as efficiently canceled. The clicking sounds of my husband's keyboard while he works next to me fade out to about 50% of their original loudness, leaving out quite a lot. Of course, the moment I play some music, they get drowned out. In this instance, tight in-ear fit and music volume play a much more important role than ANC.

Besides reducing noise while you jam to your tunes, the presence of ANC does improve two other features. First, it cancels nearby wind and crowds when you're on calls. Second, it allows for a more immersive transparency mode that lets you stay aware of your surroundings while still enjoying your music.

There are several small flaws in the FlyBuds NC. The generic design, average mids and highs, mildly effective ANC, and lack of volume controls or Qi charging are middling at best, if not disappointing. But then I take a step back and remind myself that these only cost $60 and my entire outlook changes.

For $60, you get basics like USB-C and Bluetooth 5.0, a nice-enough sound with thumping bass, good battery life, and excellent fit and comfort. If you're buying these solely for the ANC, you may be a bit disappointed as they won't come close to more expensive buds, but you'll still get plenty of isolation by combining the ANC mode with a tight physical fit and some music. 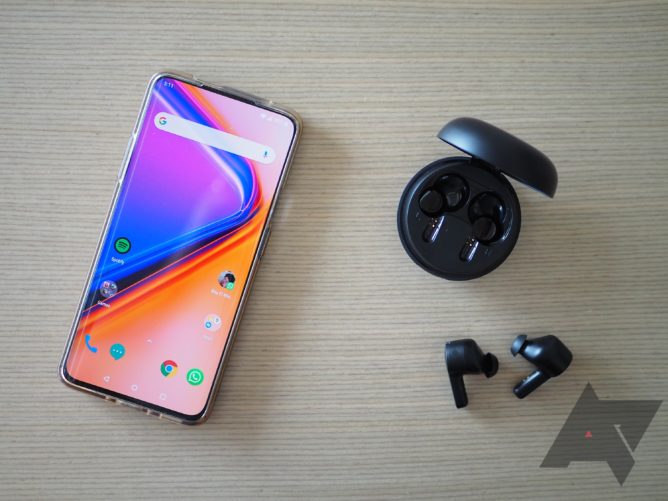