Pixel phones are renowned for stellar photography — when the camera app is working correctly. Pixel 2 owners, in particular, have complained about camera failures for a long time. We reported on it at the start of 2020, in fact. But even though the worst of this year is hopefully behind us, Pixel 2 users are still having camera problems — and things might be getting worse.

Affected Pixel 2 devices briefly display the camera app UI, but the viewfinder stays completely black. Sometimes the app just refuses to open, or crashes immediately. And this doesn't just ruin the default Google Camera app; other third-party apps that utilize the camera like Instagram and Whatsapp are rendered useless as well.

Since our initial article, reports have continued to come in about these Pixel 2 camera problems — and it looks like some Pixel 3 Pixel 3a, and Pixel 4 owners are having trouble as well. 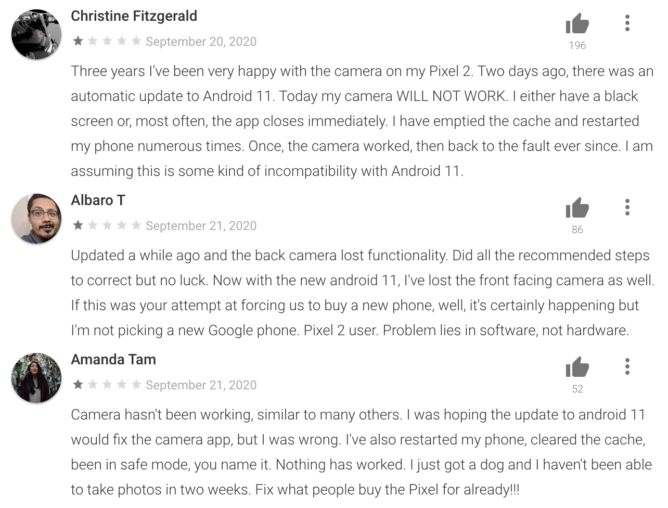 It's still not clear what causes the issue, though some speculate major software upgrades like Android 10 and Android 11 trigger its arrival. Google offers an entire support page dedicated to fixing Pixel camera problems, but the recommendations of resetting and cache clearing don't seem to provide a remedy in this situation.

A few months ago, we reached out to Google, but received no response. We've requested further comment today and will update if we learn anything new. Right now, Pixel users experiencing camera app problems seem to be out of luck. Google's premium phones are recognized for their great photos, but we shouldn't overlook the Pixel's problems, either. Without a camera app you can count on to work reliably, does everything else that makes up a Pixel still leave it worth buying?