Most budget and mid-range phones don't usually have the most impressive camera setups, but Samsung is looking to change that — at least in the Indian market. 91mobiles is reporting that the Korean tech giant is set to launch a camera-centric Galaxy F series of phones very soon.

Details on these Galaxy F phones are sparse, but sources say that they'll be priced between Rs 15,000 (~$204 USD) and Rs 20,000 (~$272 USD). 91mobile's article does have some conflicting information; their title says the phones will launch by the end of this month, but the text says the first Galaxy F phone is set to launch at the beginning of October. Whatever the date actually is, these phones are probably debuting in two to three weeks. The first one will allegedly only be available online, but it may make its way to stores later.

It is somewhat surprising that no details on the Galaxy F have leaked, but given that it's already the middle of September, we should be hearing about these phones officially very soon.

Our friends over at XDA spotted a phone called the Galaxy F41 on the Google Play Console. This could be the first Galaxy F phone mentioned. 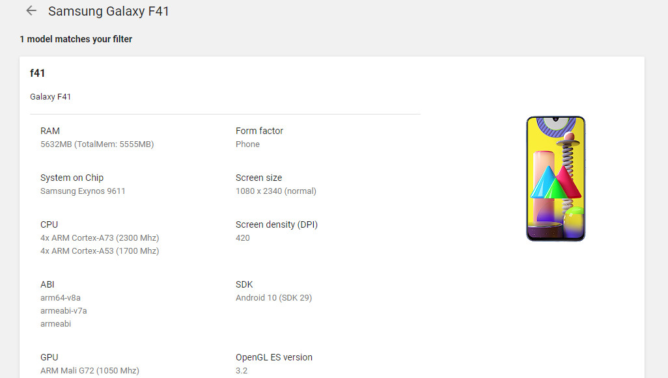 The Play Console entry gives away several specs — a 2340x1080 screen, an Exynos 9611 processor, 6GB of RAM, and the Android 10 OS. The photo attached depicts a phone with a teardrop notch and pretty small bezels.

We should hear more details before long.

As we wait for Samsung to make this new series official, the company is sending out F-themed teasers.

Now, this is cool! Samsung sent us a #FullOn T-Shirt. What could this be? New Galaxy F series maybe? Stay tuned till we solve this mystery of F. pic.twitter.com/P25DabWclq

Samsung has finally acknowledged the Galaxy F41's existence, and the launch has been set for October 8th at 5:30 PM local time. The announcement says the 'F' in the name stands for 'full on,' a "lifestyle that defines today’s young Gen Z consumers." How do you do, fellow kids?

The reveal page on Flipkart confirms that the F41 has an AMOLED 'Infinity-U' display, and that the phone will be manufactured in India — a strong selling point during the country's current tensions with China. Technical Guruji on YouTube has also uploaded a brief hands-on video, embedded below, for those of you who speak Hindi.