It's rare that a battery has enough going on that it warrants a full review, but the Aukey PowerStudio 300 is no ordinary battery. For one, it's gigantic with a 297Wh capacity and more ports than you can shake a USB cable at. It's also lovely, which is not something I've ever said about a battery before. The power and functionality of the PowerStudio make it a great battery for long trips away from the power grid or as a home backup power source. Although, not everyone needs something like that, and the $329 asking price is steep if the PowerStudio won't fulfill a specific need. Its good looks won't change that, but you can get it at a substantial discount during the pre-order period.

I never expected to have any sort of aesthetic attachment to a battery, but here we are: I love the way this one looks. It's like a retro radio, but there's a massive lithium-ion battery inside. This is one of those instances where the physical object lives up to the renders -- the PowerStudio looks every bit as nice in person, and it feels sturdy. There's a nice leather handle to help you lug it around, and you'll need it. This is not something you'll want to drop it in a backpack, tipping the scales at 7.9 pounds (3.6kg).  It's heavy not only because of the sizeable battery but also because of all the charging hardware. 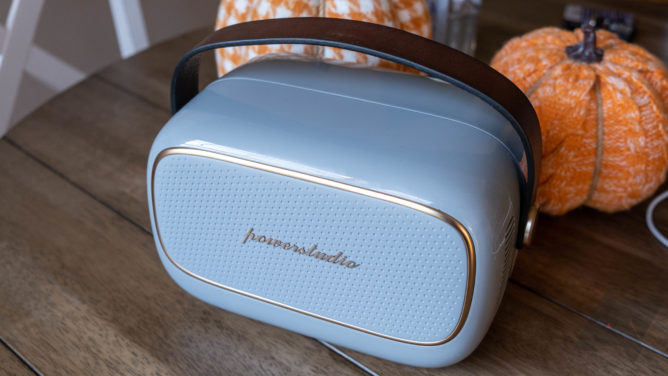 No matter what thing you need to charge, the PowerStudio can probably do it just as fast as a wall outlet. You can even run small appliances, provided they aren't too power-hungry. It has a maximum output of 600W (peak) with 380W sustained power across all the plugs. There's also a sine wave inverter inside, so even sensitive electronics should be fine. On the face of the device, you have three clusters of ports below the display and LED light. On the left you have DC power, in the middle USB, and on the right are a pair of AC outlets. Each one has a button to enable and disable the ports, and the current status is reflected on the screen.

Most of the "large" power banks you see top out around 20,000mAh because that's the most you can take on a commercial flight—this is much bigger. Backup systems like the PowerStudio blow through that limit because they have a very different use case. This battery could sit on a shelf, ready to keep you powered in the event of a blackout. It's also ideal for camping trips and other extended outings away from power outlets. At 297Wh (82,500mAh), the PowerStudio has enough capacity to charge a 13-inch MacBook Pro five times or an average phone 15-20 times. 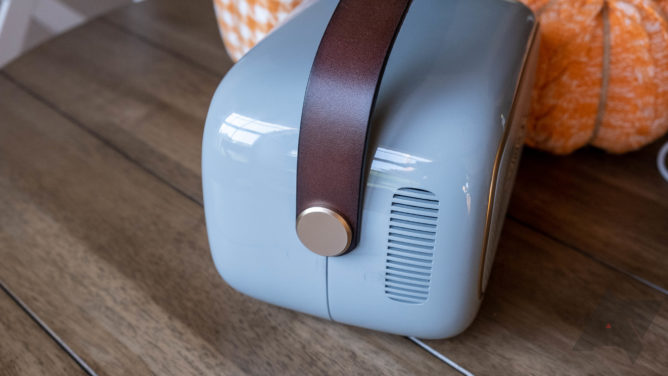 There are small buttons next to each cluster of ports to turn them on and off. There's also an LED light at the top with its own button. The layout is good, except for the AC outlets. They're very close together, and only the bottom one has space for the grounding prong. You probably won't be able to fit two phone chargers at the same time, which might have been possible if the ground slot were on the top outlet. I've also noticed that the plugs remain on even if they're not in use—I accidentally left the AC section enabled overnight, and it drained the battery substantially. Apparently, there's no automatic shutoff for AC like there is for the other ports.

The PowerStudio comes with a DC cable and adapter, which charges the battery at 60W via the barrel-style input. There are no other cables included, but you should be able to use the USB cables that came with your devices -- the PowerStudio has a port for it.

A battery this size with output measured in hundreds of watts is difficult to test with a single device, so I plugged in numerous laptops, phones, and other devices to see how the power output varied. It hits 300+ watts without any complaints, and it managed short-term spikes above that. When the PowerStudio does reach its limit, it'll beep and shut off to prevent damage. It's silent most of the time, but heavy loads will trigger the internal fans, which are a bit noisier than I expected, similar to a high-end laptop.

The 100W USB-C port is the star of the show, easily maxing out every Power Delivery-enabled laptop and phone I connected. I wish there were more USB-C ports, even if they didn't all hit 100W. That said, I was able to make do with the four USB-A ports, two of which support QC 3.0 with max 18W. That's fine for now, but in a hypothetical future when phones in the US finally push past the 18W PD barrier, this assortment of ports might feel restrictive. 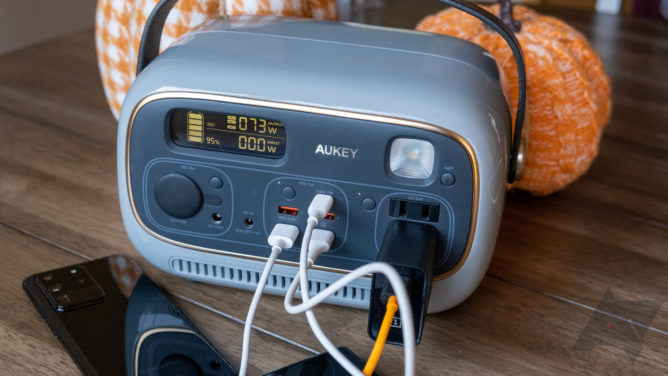 Most of the phones I connected to the PowerStudio's USB ports hit full speed, including devices from Google, LG, and Motorola. The maximum for those phones, of course, is 18W Power Delivery. The OnePlus 8 managed its maximum 15W PD speed as well. Interestingly, Samsung phones only reach 15W instead of 25W, but there's always been something odd about Samsung's charging specs. The AC plugs on the PowerStudio are handy if you've got something like a fan or speaker you want to power. It's also helpful for devices that don't charge at full speed with the USB ports. Just plug in the right adapter, and you can hit maximum speed like you would with a wall outlet. OnePlus and Samsung phones charge at full speed with their stock adapters plugged in.

Aukey says the PowerStudio has "industry-leading" wattage measurement accuracy. I'm not sure what it takes to lead the industry, but I've found the PowerStudio's display to be very accurate. It agrees with my dedicated USB-C power meter (plus or minus a watt), as well as my common sense. For example, if I plug in an empty OnePlus phone, it should pull about 30W. And that's what the PowerStudio reports. 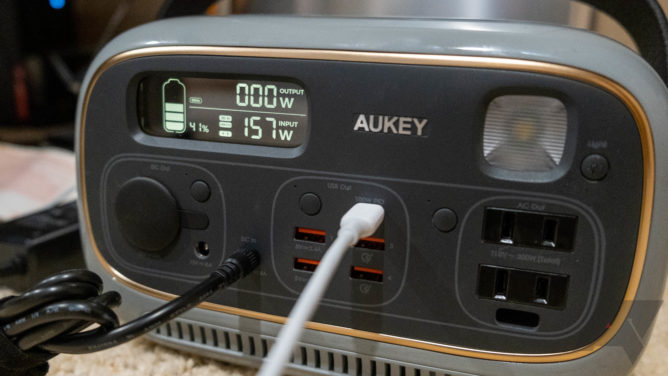 The USB-C port can charge the PowerStudio at the full 100W, provided you have a cable and plug that support that much power. This is my preferred way to top off the PowerStudio, but I'm trying my hardest to live a USB-C life. You can also use the included DC charger to get 60W of juice with no additional purchases. In addition, you can also use both the DC and USB-C charging options simultaneously to get 160W into the battery. Aukey calls this "Double Helix" charging, and it can completely fill the PowerStudio in about 2.5 hours. That's pretty great.

Yes, if you need a giant battery. That is, admittedly, a big caveat. Most people don't need a 300Wh battery sitting on the shelf, but boy will you be happy you have it if the power goes out. The PowerStation will really shine if you spend a lot of time in the great outdoors and want to stay charged. It's portable-ish at almost 8 pounds—not something you'll want to haul around all the time, but you can toss it in the car if you know you'll need a lot of juice on the go.

I love the retro design of this battery, and the charging capabilities are great. The 100W USB-C port is the closest thing you'll get to future-proof charging right now. That's enough power to hook up a USB-C hub and charge numerous phones, laptops, and other devices. I would have preferred at least one more USB-C on the PowerStudio itself, but the four USB-A ports are nice to have for lower-drain devices. Plus, you always have the AC plugs for anything with a weird charging standard. 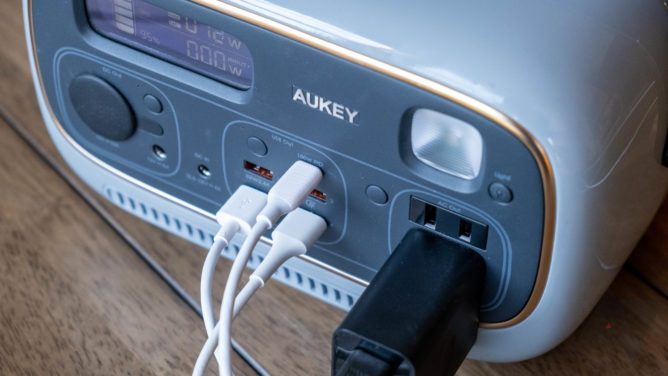 This is an expensive battery at $329, but Aukey offers some solid deals on the Indiegogo page. If you are considering this battery, you should absolutely snag it during the pre-order period. Through the end of the Indigogo campaign, you can get the battery for $239. Aukey also has a bonus discount for AP readers that knocks off another $30, bringing the total to $209. That's a great deal.