If you're familiar with Google Drive, you probably know the most convenient way to sync your local folders to the cloud is to use the Backup and Sync app, which seamlessly replicates the folders on your computer to your Google Drive, and vice versa. However, if you're a G Suite user, you have to rely on another app called Drive File Stream, which does things differently. Instead of downloading your content locally, it lets you access it using your computer's file browser, much like a NAS. Google appears to want to extend these features to regular Drive accounts, and is looking for testers who'd be willing to try Drive File Stream on their computer.

Unlike apps like Backup and Sync, Dropbox, or Box, Drive File Stream does not create a local folder that mirrors your Drive. It instead mounts a virtual drive on your computer that lists folders stored on the cloud, making them easier to browse through Windows Explorer or Finder, without actually saving the files locally.

It's a convenient way to save space on your computer, especially if you work on a bunch of shared folders that you don't need to keep on your computer. Of course, it's still possible to download the content you need locally, so you can work on it when you're offline. This means the content remains accessible but doesn't take up local storage space, unless you specifically download and sync the folders and files you need to access offline. 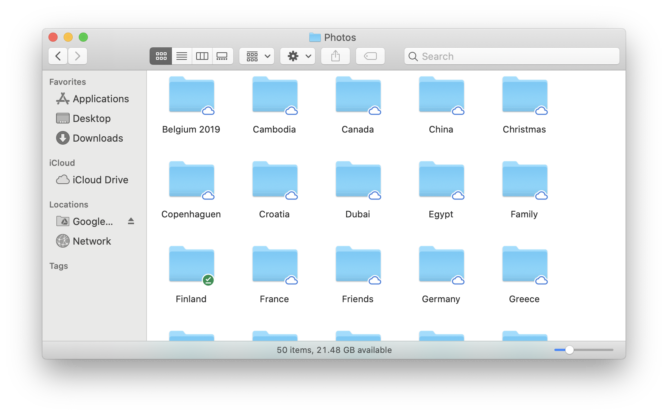 None of these folders are actually stored on my Mac, except "Finland," but I can still access them from Finder

You have to manually select which folders you want to make available offline. Otherwise, you won't be able to access them if you're not connected to the Internet

Backup and Sync, on the other hand, lets you sync other local folders to the cloud, such as the files on your desktop, which File Steam cannot do. It also gives you the option not to sync specific folders from your Drive to your computer to save space, but that would prevent you from seeing their content entirely unless you go to the Web interface.

Although File Stream sounds like a better offering, I personally hate the app. I've used it for about a year and a half in my previous job to sync my Drive folders locally and had a dreadful experience: The software was often unresponsive, it wasn't easy to spot which files were locally downloaded on my computer — I have to manually check if there's a small green checkmark for each file or folder, and the app would take up an incredibly high amount of system resources on my Mac.

Another issue I see is if you're using several Drives at once. For instance, you can sign into multiple Google Accounts with Backup and Sync, or can even use it together with File Stream with different credentials — I could, for example, log into my personal Gmail account and my Android Police account running the two apps in parallel on my Mac. Unfortunately, I haven't been able to replicate this behavior with Drive File Stream, which means I'll have to stick to a single account or manually switch back and forth between them.

That being said, if you do have a high amount of files on your Drive that you don't want to store locally on your computer but still need to easily access them, File Stream could be worth the try. It should also provide a better solution to the current shared folder mess that regular Drive users have had to deal with on Backup and Sync. But if neither of these issues affect you, I would strongly recommend you stick to Backup and Sync, which offers a much more seamless experience. In fact, I'm actually surprised Google doesn't let G Suite accounts use the latter, as it might be a better compromise for some users.

If you still want to give File Stream a shot, below are the instructions to get set up:

Google didn't clarify its plans regarding the future of both apps, but if you ask us, it always felt a bit redundant to have two different solutions for what is essentially a very similar purpose. With this test, Google might be hinting at a potential future retirement for Backup and Sync, and a complete switch to File Stream. I wish it would instead explore merging both apps and offering a more seamless experience, just like Microsoft does with OneDrive Files On-Demand.