Apple Music gained a bunch of fresh new features in iOS 14, and they're enough to make YouTube Music jealous. The changes that landed on Android in beta version 3.4 include autoplay, a new smarter search experience, a revamped Now Playing interface, and one that got lost in all the other new stuff: crossfade.

It might only be live in the beta right now, but the feature works pretty much how you'd expect. In the Playback section of the app's settings page, there's a new crossfade toggle. Once enabled, it will allow songs to "overlap and crossfade."

Crossfade works fine, although the jump between tracks is a little janky.

What's even better to see than the toggle is that the duration of the crossfade is customizable. Right now it defaults to the maximum length of 12 seconds, but I quickly realized that doesn't sound great with most songs. 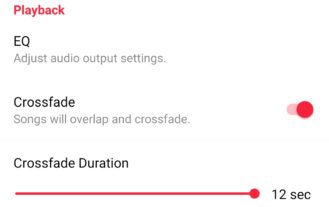 The crossfade duration can be adjusted between one and twelve seconds.

With this change, Apple Music widens its lead on Google's own music streaming app, which doesn't offer playback caching, volume normalization, or crossfading capabilities. This beta release also brought a ton of iOS 14 changes to Android, such as autoplay, new search abilities, and the Now Playing redesign that makes it arguably the best-looking music streaming app.

It's a little weird to see Apple's music streaming service bypassing Google's own app on Android, but hey, 2020 has brought a lot of weird things with it. If you're eager to enhance your audio experience with crossfade on Apple Music, you can join the beta program on the Play Store or download the app directly from APK Mirror.