Kiwi Browser showed signs of life last week, but it's not the only browser getting some fresh love. In new updates to the desktop and Android clients, Opera is adding a slew of features and improvements, including QR-code syncing and expanded availability of Flow to let users securely message themselves.

The Flow feature lets users securely send notes, photos, and other files — to themselves. It's like having Pushbullet functionality baked right into your browser. It's a little more convoluted than Chrome's tab-sending solution, but this method has its own advantages. Flow was introduced with the Touch browser Opera built specifically for mobile back in 2018, but now it's coming to the standard Opera browser for Android in version 60 thanks in part to popular demand.

It's also becoming easier to sync data, accounts, passwords, and more between devices thanks to QR-code scanning. Instead of having to sign in with an email and password, Opera will now generate a QR code on a device currently logged in that you can scan to quickly sign in on a new device. 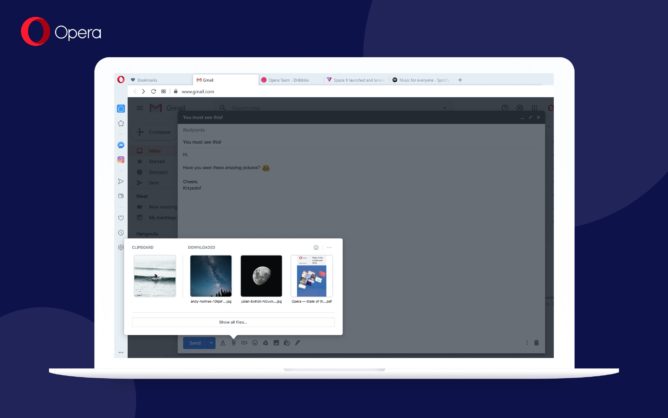 Along with expanding the availability of Flow and QR-code syncing, there's another addition to the speed dial section that displays suggested sites to visit based on past history. The Opera team has also added an Easy Files feature to the desktop client that lets users quickly find and attach recently downloaded files online. It's a bit similar to the Holding Space feature ChromeOS is working on implementing in that it lets you deal with your files more efficiently.

These new additions are available on Opera's desktop client in version 71 and on Android in version 60. Eager to send yourself some affirming messages? Download the Android update from APK Mirror or the Play Store now.