AMD is bringing Zen to Chromebooks. Shoring up last year's announcement of a handful of A-series chips, AMD has decided that the time is right for its much-loved Zen-based cores to make the trip. In total, five new 15W Ryzen and Athlon-branded chips based on Zen and Zen+ architecture are coming to Chromebooks.

It might surprise you, but AMD says it's managed to snag over 20% of the Chromebook market share as of last quarter — all without Zen helping it at the high-end. Turns out those A-series chipsets have made for some popular Chromebooks, even with a whole lot more Intel and ARM models competing against it. These new Zen-based designs will take that same fight to the higher-end Chromebook space. 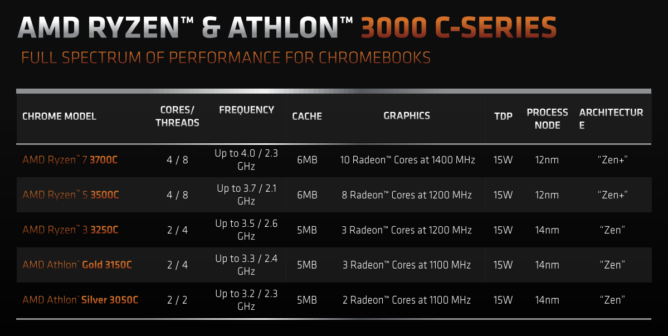 The new chips come in two groups: Athlon-branded models destined for Chromebooks we're told will cost around $300-450, and Ryzen-branded models that push up from there. If you're familiar with the existing U-series Ryzen and Athlon chips, these specs may sound familiar. That's because the new C-series chips are basically identical (minus a few trivial differences).

In case you're unfamiliar, that means the lowest-end Athlon Silver 3050C sports a Zen-based 14nm dual-core dual-thread design at 3.2Ghz boost and 2.3Ghz base, bundled with a GPU with two Radeon cores at 1100MHz. Stepping up from that are two mid-range chips (the Athlon Gold 3150C and Ryzen 3 3205C) that are upgraded to a dual-core quad-thread design with slightly higher clock rates and a more powerful three-core GPU. Above that are the highest-end offerings based on newer "Zen+" architecture: The Ryzen 7 3700C and Ryzen 5 3500C. Both are quad-core eight-thread, with the highest clock rates, more cache, 8-10 GPU cores, and built to a smaller 12nm process.

All the new chips are a base 15W TDP, though they can be configured down (and possibly up) from there, and they all support features like Wi-Fi 6 and Bluetooth 5. 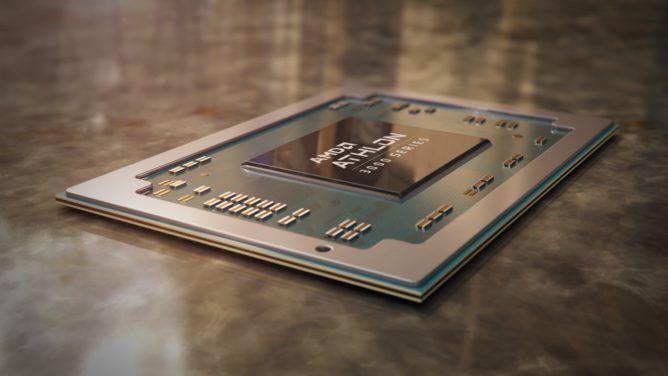 AMD didn't give us any good benchmarks, so here's another render.

These new chips elevate AMD's Chromebook offering from the entry-level, setting sights at the high-end market. Odds are, these chips will mostly end up in enterprise-targeted models, but we might see them available in some high-end consumer Chromebooks, too. And they'll deliver some pretty sizeable performance increases when they do. Although AMD didn't share a set of Chromebook comparison benchmarks mentioned in passing during our briefing, the U-series versions of these chips earned plenty of praise. Sure, the latest Intel chips might be faster, but they also seem to cost a whole lot more, and Chromebooks are especially sensitive to pricing. In short: AMD is poised here to take a whole lot more than just 20% of the Chromebook market now.

Names like HP, ASUS, and Lenovo have all been tied to future hardware, and we're told at least six new models with these Zen-based chips are coming, so look forward to future announcements.