When One UI launched about 2 years ago, it was a huge deal. It was the next evolution in Samsung’s software design and user experience. When One UI 2.0 launched last year with Android 10, there wasn’t a major design overhaul. It was the basic One UI design with the new Android 10 features. This year, that changes.

One UI 3 comes with a brand-new UI to match the same one-handed UX that Samsung has been working on for the past few years. It’s modern, it’s sleek, it looks like Color OS when it was bad. There are a few improvements and a few changes that come to match Android 11 and the one-handed UX, so let’s go over those in comparison to One UI 2.5.

First things first, quick settings and notifications. These are the biggest changes to the overall UI I’ve noticed since installing the beta. These elements look completely different. Samsung removed of the card style UI elements and replaced them with a large shaded transparent background with blur.

For notifications, Samsung is now using the new notification categories for conversations, alerting, and silent notifications. This works the same way across most Android phones with Android 11.

What Samsung did change is the media player. There are no media settings in the fully expanded quick settings panel, but instead only shows up in the notification panel. This isn't a change from One UI 2.5, but instead something Samsung didn't add from Android 11, where it would be in both locations normally. This panel in One UI 3.0 allows for you to swipe between media players and control it like the notification used to, but it is now in its own dedicated area. 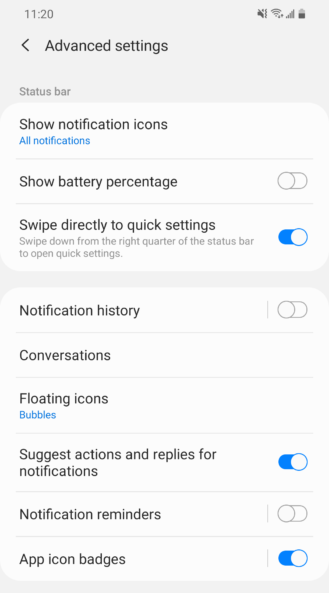 As part of Android 11, Samsung added notification history. It’s not enabled by default, so if you want it, make sure to enable it in status bar settings.

Android 11's notifications bubbles are supported too. These are like the old Facebook Chat heads, but system-wide. These are part of Android 11. Samsung does have a few options, bubbles and smart popup view. Smart popup view appears to be a custom Samsung version of this feature. Unfortunately, this option wasn't working for me in the beta and only bubbles worked.

Samsung also redesigned and relocated the volume control UI. It’s now on the side of the phone, next to where the volume rocker would be. It’s much easier to access now than on the top of the phone where it previously was.

With One UI 3, the home screen also gets a pretty big visual overhaul. The app drawer now matches the overall aesthetic of One UI 3.0. Samsung also added a double-tap to lock on the home screen. If you double-tap anywhere that doesn’t have a widget or an icon, it will lock the phone. Unfortunately, that feature is non-functional in the current beta.

One unfortunate change Samsung made is to folders. Folders now only show 12 apps per page instead of the previous 16. It looks a Samsung decided to design the UI for taller phones rather than wider ones.

The Finder option in the app drawer also received an update with brand new suggestions. It will suggest apps, search suggestions, and settings. Previously, it would only show the recommended apps and recent searches.

The long-press menu for the home screen has also been changed. It now says the app name along with just styled to be more similar to the rest of One UI 3.0.

The recent app menu, which is actually at a system-level part of the launcher, did get changed as well. It is now a little lighter to match the overall aesthetic of the UI.

One smaller change is swiping down for notifications. Previously it was an option you would have to manually switch in settings, but now it’s enabled by default. A small but meaningful change to the overall UX.

Lockscreen and Always on Display

To add to the changes, Samsung moved the clock and notifications down towards the center of the screen. There’s also a new lock icon right under the hole-punch camera. The quick app icons at the bottom left and right corners are now also grayscale icons with high transparency instead of full-color icons in One UI 2.5.

Samsung did revamp the way lock screen and always-on-display widgets work, though. Now, you click on the clock while on the Lock Screen and it opens the widget page where you can see whichever widgets you want to be enabled. Previously, you would swipe through the different options on the Lock Screen. I haven’t been able to reliably use the new widgets on the always-on-display yet, but it’s just a beta.

The always-on-display itself has a few new customization options. There are the same number of clocks and colors to set, but now there are more options to set GIFs on the always-on-display. The GIFs will start playing as soon as you lock the phone, but the animation stops after a few seconds.

Settings received a decent overhaul as well. There are all new icons for each of the categories and the Samsung account is now front and center at the top of the screen.

There are, of course, a few changes and new options as well. In battery settings, there are now two new options (at least at first glance): Minimal battery usage and Enhanced processing. These are the new names of ultra power saver and performance mode, so they aren't actually new.

In advanced settings, Video Enhancer did get a minor change. You now need to enable it on an app-by-app basis instead of an overarching setting.

Samsung also renamed and moved smart stay, which is now known as "Keep screen on while viewing." It will keep the screen turned on and not auto-lock while you're looking at your phone. Something that was removed in One UI 3.0 is swipe to call or send messages. You will now need to open a contact in the Messages, Phone, and Contacts app to be able to call or text that person.

Samsung also separated the app settings into two sections, Samsung apps and non-Samsung apps. This move makes little sense, but it seems like Samsung is needlessly trying to make their own services competition for Google, which they are not. This is also similar to iOS where Apple separates their apps into their own settings, away from third-party apps.

Speaking of settings, the advanced Wi-Fi settings freshened up with a more custom look and easier access to advanced settings, which are now under a single dropdown menu.

Bixby Routines now has a more refined UI. Samsung has categorized the presets and added a few new options for disconnecting and connecting to different Bluetooth devices and Wi-Fi networks as triggers.

The Contacts and Phone apps received some decent improvements as well. You can now edit more than one contact at a time along with easily deleting or merging duplicate contacts. Search also an improvement, according to the changelog.

One of the new customization features Samsung is adding is actually letting you choose what the incoming call screen looks like. You can change the background color and the way the information about the caller is shown. The background can also be set to a picture or video of the users choosing.

Samsung Internet received a few changes with version 13.0, the version that comes with One UI 3.0. Visually, the only major change is now scrolling hides the status bar icons and the new grid view for seeing open tabs. Samsung did also improve the menu layout, among other minor changes.

Just like most One UI 3.0 apps, Samsung Pass got a UI redesign. It now makes it a little easier to find your different options and sorts them into six different categories. Samsung also added a secure notes option to Samsung Pass in case you wanted to keep something there instead of Secure Folder or an encrypted note in Samsung Notes.

The gallery app now has a newer UI. It switches to three photos across instead of four, which again seems like a change for taller screens. In the image editor, it also allows you to revert an edited picture to its original state after the edit is completed.

To add to that, Samsung claimed to improve the auto-focus and auto-exposure on the Galaxy S20. They also said they have made improvements to stabilization while taking pictures of the moon, but we'll have to test that separately.

Messages got a nice little change with a new trash bin. After you delete a text thread, you have 15 days to go to the trash and restore it before it's permanently deleted.

The keyboard didn't undergo many major changes. The settings did get reorganized but nothing new or major was added. In my limited usage of the beta, the autocorrect algorithm does seem to have been improved a bit.

Samsung's calendar app has a more refined UI now. The calendar events are now separated into their own cards instead of being one larger card.

Samsung did a great job with One UI 3.0 in terms of refining what they've already done. Apps feel more consistent, it feels faster, and it's a good evolution for Samsung's software. There are not many new features, but the features they did add are meaningful and the changes they did make are great.

The one thing I just can't get over is the devolution of Samsung's design. Samsung went from a subjectively great design that made everything feel layered and made for the device to something that just looks and feels like it doesn't belong. One UI 3.0 moves more in the direction of aesthetically heavy Chinese ROMs compared to Samsung's greatly improved software in the past few years. Nevertheless, this is the UI Samsung is going with, and that's worth something, I guess.