I really can't stress enough how game-changing folding phones are. I know they're frequently (and fairly) criticized for things like display durability and price, but once you actually use one and understand the experience, something just clicks — or, at least, it did for me. They're still not for everyone, but if you absolutely need to maintain productivity on the go, then the Z Fold2 will be as disruptive to your idea of work as the early Blackberry phones were. In fact, to prove a point, I was able to do my entire job here at Android Police from the phone for most of a whole day. 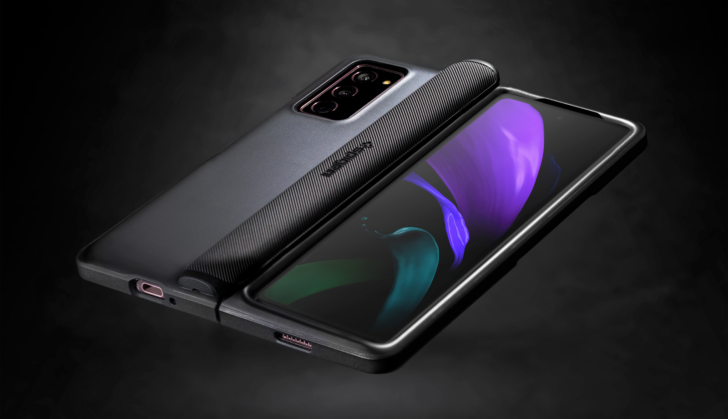 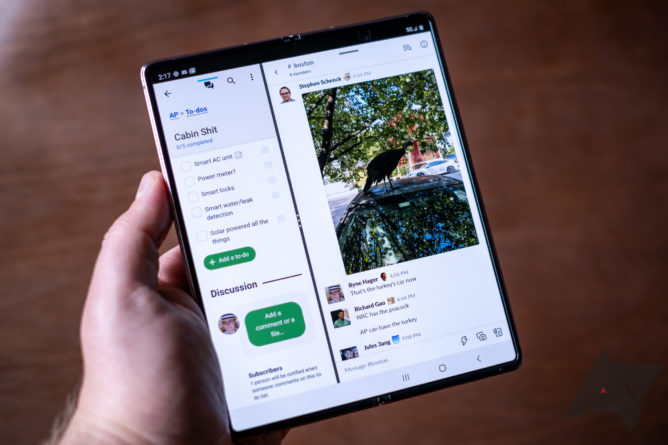 The hardest part was setting up a workflow. Samsung's multi-window tools on One UI are among the best out there, but it's still not quite ideal, and I ran into a couple hiccups. At the time, I couldn't get multiple Chrome instances working across multiple windows, but I'm told that may be fixed now. Rearranging windows into the specific tiled configuration that you want is also a pain in the ass, though once you have things dialed in, you can save that setup as a dedicated app pair for easy use later. That is, when app pairs work right.

Sometimes you'll launch a specific configuration of multiple apps, and one just won't start — my normal work setup ended up being Chrome, Slack, and Basecamp, and sometimes Slack would just say no — though re-launching the pair from the edge panel always fixed things. I also ran into issues with some apps freezing or freaking out in multi-window. Chrome was the most frequent offender, suspending itself while I was in the middle of typing something in a field in Chrome itself, but a couple taps to kick it in the butt and remind the app it was running always set it straight.

In short, the multi-window experience in One UI on the Z Fold2 can be buggy, but it's easy to fix when it bugs out, and when it works, it works pretty great. 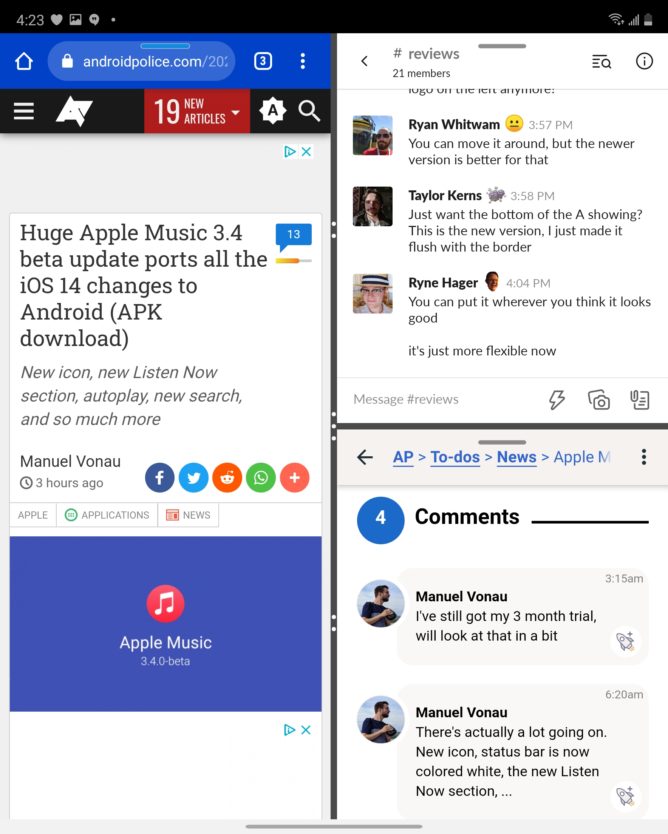 This is similar to the workflow I ultimately settled on.

My workflow probably won't be the same as yours, but I was able to write content in WordPress, edit other writers' content, publish both, monitor team communications in Slack, and keep track of what is essentially a group to-do list, all from my phone. And when I needed to deviate from that, I could quickly replace an app in my tiled configuration, launch it in free-form mode on top, or just switch to it in full-screen. Simple photo editing: check. Watermarks: check. Team communications: check. Videoconferencing: check. To-do tracking: check. Writing and browsing across any browser I want: check.

The 7.6" display, though big, wasn't quite large enough to avoid a feeling of mild claustrophobia, but even with a keyboard open, I could see enough of what was going on while writing to do my job — just more slowly, and with a sensation of extreme tunnel vision.

I wouldn't say I was as productive on that day as I would have been at home with my desktop or if I had brought my big-boy laptop, but it was better than I expected, and about on par with using my iPad. That is to say, everything I did was a little slower and required some working around platform limitations. My typing speed was also unarguably down from my usual 100-120 WPM cruising speed, but — and this really is key — I was able to do my entire job. The whole thing, from start to finish, end-to-end, with nothing but the phone in my pocket. Well, up to a point: My Z Fold2 died at around 2PM, with about five and a half hours of screen-on time. Still, that's pretty good. 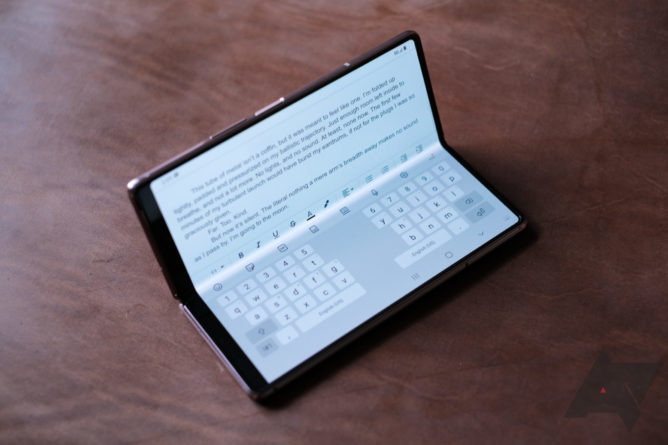 Sadly, all my screenshots from that day are gone — Samsung phones are aggressive about letting background apps wake up, the phone apparently never let Google Photos do its thing, and Samsung has already taken the Z Fold2 back, so you'll have to trust my memory and verbal account of events. But I was able to do my full and complete workflow as a Super Professional Blogger from my phone while at a long, unavoidable appointment, replacing what would have been my iPad or laptop the entire time.

I can't claim the Z Fold2 can let you do your particular job end-to-end. Plenty of workflows just can't be reproduced on a phone given software and hardware limitations, and plenty of jobs require more than just a computer to begin with — and that's further assuming everything you do can be translated to an app. It all depends on the limitations of your own workflow. Even for me, it wasn't exactly ideal, and I wasn't as productive as I'd usually like. But the fact that it was even possible is pretty amazing. Much like the Blackberry revolutionized on-the-go communication for executives, folding phones are going to change the way we do work, and I'm personally sold on the Z Fold2.

I have an unhealthy work attitude — on Slack late at night, butting into work even when I'm ostensibly on vacation — and the Z Fold2 enables me in both senses of the word, letting me attend to Things That Need to Get Done at all possible times. You can see that as good or bad, but either way, it's undeniably productive.

Google Drive will finally start taking out the trash in October