The Surface Duo is one of the few recent examples of a new form factor in smartphones. Although it shares similarities (and some use cases) with foldable phones, such as the Galaxy Z Fold2, the choice to use two individual displays comes with its own set of advantages and disadvantages. That begs the question: is the Duo best used as a primary phone, or a secondary device to compliment an existing phone?

The unique form factor of the Surface Duo led some people, including our own Ryne Hager, to wonder if it should really be called a phone at all. That's a completely different discussion that I have no desire to debate right now, but for what it's worth, Microsoft prefers to call it a "dual-screen mobile device" on the product page. The Surface Duo connects to LTE, can answer phone calls, and fits in your pocket, so many potential buyers are obviously looking at it as a replacement for their current phone.

However, some disadvantages come with the Duo's design. The dual-screen layout absolutely increases productivity, since you don't have to switch between apps to copy information or perform two tasks at once, but typing in expanded mode without rotating the device sideways (which covers the bottom screen with the keyboard) can be tricky. Flipping the Duo into single-screen mode makes typing easier, but then your oil-coated hands are rubbing all over the rear screen, which becomes apparent once you return to dual-screen mode. You'll want to keep a microfiber cloth handy. 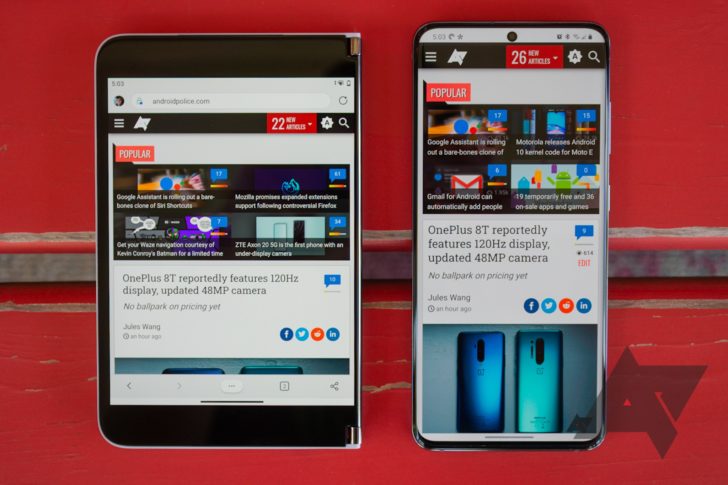 The Surface Duo (left) next to the Galaxy S20 (right)

In single-screen mode, the Duo is wider and shorter than just about every other smartphone. Both of the displays on the Surface Duo are 3:4 (4:3 in landscape), while most other phones are 16:9, 18:9, or even taller (like the 21:9 Xperia 1 II). That means one-handed operation is more difficult on the Duo than other phones. That also makes the Duo a tighter fit in some pockets, unless you stick to cargo pants or carry around a small bag.

There are also some ways the Surface Duo falls behind other flagship smartphones, which aren't necessarily due to the dual-screen layout. It uses last year's Snapdragon processor, there's no NFC for contactless payments, the screen is only 60Hz, wireless charging is nowhere to be found, and the Duo will absolutely not survive a dunk into water. The camera is also more comparable to a mid-range Android phone than what you would find on a Pixel 4 or Galaxy Note20. Finally, the lack of an always-on display or LED light means there's no way to know if you have new notifications without opening the phone (or listening for the notification tone).

The Surface Duo might feel like a regression from your current phone, depending on what features you're used to.

You can absolutely use the Surface Duo as your one and only phone, if you want. It runs all the same applications as any other Android phone, calling and texting works just fine, and it can snap the occasional photo. However, it might feel like a regression from your current phone, depending on what features you're used to. I didn't mind the lack of NFC, since Google Pay works just as well on the Fossil smartwatch I have paired to my Duo, but no waterproofing means I can't use it in the rain without worrying about hardware failures. If you have wireless chargers around your home, the wired-only charging might be a key drawback.

I think the best use case for the Surface Duo is probably as a secondary device, complementing your existing smartphone rather than replacing it outright. That gives you the versatility of two screens when you need it, and all the features of a regular smartphone when you don't, while still being more portable than a laptop or tablet. The Duo works perfectly well without an active cellular connection, and if you want always-on internet, several networks in the United States have data-only plans. For example, Cricket Mobile (an AT&T MVNO) can give you 20GB of data-only service for $35/mo, or 40GB or $50/mo.

There's a good chance that future iterations of the Surface Duo will bridge the feature gap with traditional top-tier smartphones, but the current model might not be the best outright replacement for your current phone. If you're on the fence, check out our full review for all the details.