YouTube is one of Google's most widely used products, but that doesn't necessarily mean it's resistant to change. Whether it's making the upload experience easier to find or rethinking how many emails need to be sent out, the YouTube team loves to tinker. The latest experiment, spotted in the wild by one of our readers, sees a new design in testing for the video playback screen on Android TV.

This new UI moves a few elements around and adds quick access to common functions such as liking a video. Information about the currently playing video, including the title, channel name, and view count has moved to the top left in this test. Now icons show up above the progress bar for liking and disliking, flagging a video, commenting, etc. Oddly enough, there's no play/pause button visible anymore. 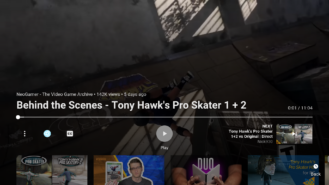 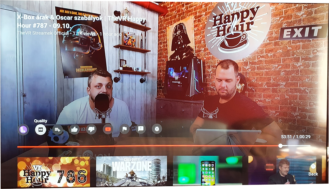 Google loves a good A/B test, so it's unclear if this new playback design is going to roll out to the masses or not. I like the direction it's going in, giving more prominence to frequently used functions rather than the video title — I usually already know what I'm watching anyway.

Android TV has seen more love than usual lately. Google Duo support is being added, as well as a slate of new features at the system-level. Google is set to announce the Sabrina dongle soon, so it's nice to see the company continuing the effort to improve core experiences like video playback and video calling in the lead up to the launch.

Android 11's sound picker will work with cast devices, but apps will need to be updated to ...

Dark mode is beginning to roll out to many Duolingo users