Mimestream was founded by Neil Jhaveri, a former Apple engineer who worked on the Cupertino company's mail app, and it attempts to translate Gmails feature set into an Apple Mail-style interface. It's written in Swift and includes features such as categorized inboxes, support for multiple account, and easy label management. Swipe gestures familiar to macOS users are utilized, and the notifications should be much better than what you get with browser-based Gmail. New features like server-side filters, quick unsubscribe buttons, and vacation responses are in the works. Unfortunately, snoozing emails isn't possible because Google's API does not support this — Mimesteam's FAQs direct users to this Issue Tracker listing in the hope that getting enough people to star it will cause Google to add support. Perhaps the Mimestream team will add its own solution in the meantime. The same goes for scheduled sending and muting conversations, sadly. 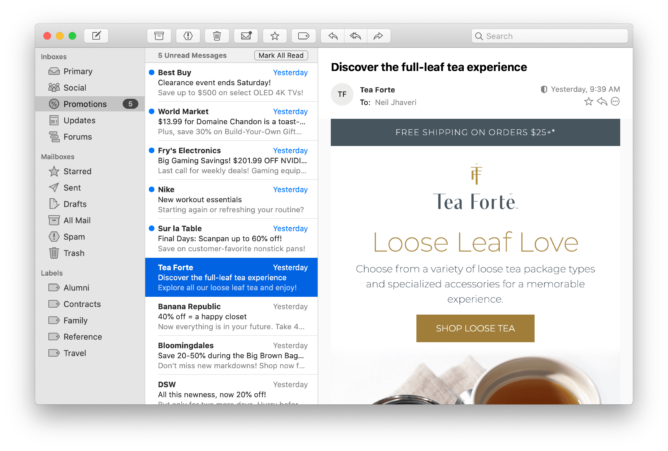 Privacy shouldn't be a concern, as credentials are stored only on your device, and the app also has built-in tracking prevention. It's free while in beta, but Mimestream will eventually cost money via a subscription. That may be disappointing to some, but it means your data won't be sold to anyone and you'll never be presented with any ads — that's something many people are willing to pay for, although the price (TBA) will have to be right.

I've installed Mimestream and given it a whirl. It's fast and responsive, and it's nice having many of Gmail's features in a separate Mac app. However, the lack of snoozing is probably a deal-breaker for me since it's something I use pretty often. The app might be compatible with your workflow, though, so why not try it out. You can sign up for the beta on the Mimestream site and you'll get instant access to the download.

Google Duo is now available on Android TV, but it only half works

RedMagic 5S review: Great at games, but not much else