The Surface Duo is the first modern Android device with integrated dual screens, and Microsoft had to make some changes to Android to properly support the functionality. We already talked abut the Duo extensively in our review, but it's worth talking more about how the phone's version of Android differs from what we're all used to. While it may not look too different on the surface (pun intended), there are some notable changes lurking underneath. 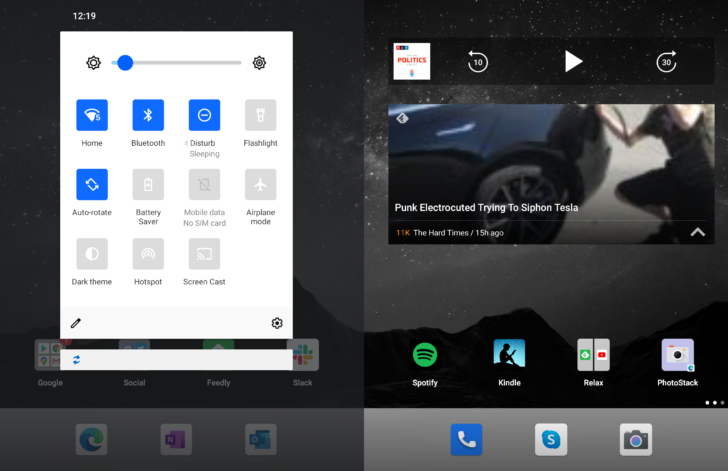 Starting with the basics, the Surface Duo runs Android 10 with the complete package of Google applications. Just like most other phones that ship with Android, you get the Play Store for downloading applications and games, plus a handful of other Google-made apps like YouTube, Maps, Gmail, Photos, and Chrome.

You might have expected that Microsoft would take some design cues from Windows 10 and bring them to Android, but the operating system on the Duo looks and feels much like stock Android. The only visual changes in the Duo's flavor of Android are minor: the quick settings tiles are square, and the brightness slider is more pronounced, but it's pretty close to what you would find on a Google Pixel phone. 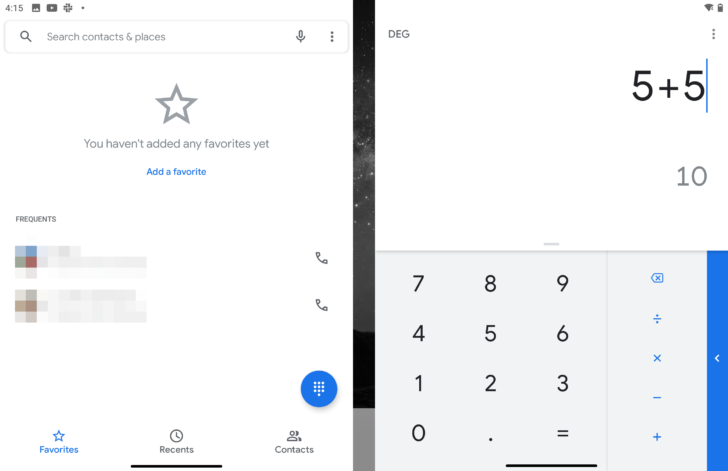 Microsoft has opted to use Google's Phone, Contacts, and Calculator apps on the Duo, which look and function identically to those apps on a Pixel phone. None of them are enhanced for dual-screen use, so stretching them to fill both displays cuts off some of the interface. On the other hand, the Settings application has a slightly different appearance than in stock Android, and there's an extra 'Microsoft' section for account sync and privacy options. 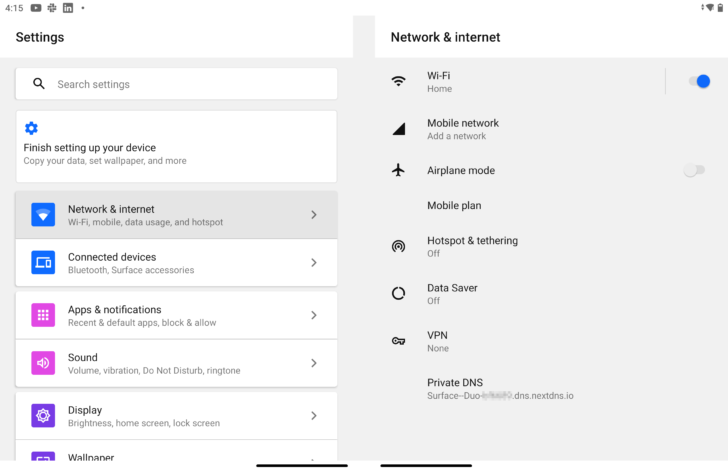 Most of the software differences on the Surface Duo come down to the changed default applications. Microsoft has its own launcher that powers most of the dual-screen functionality, but it works similarly to the home screens on other Android devices. The keyboard has also been replaced with SwiftKey, the default browser is Microsoft Edge, and so on. You can change all the default apps, but you might end up with a sub-par experience.

The greatest difference in how Android operates on the Surface Duo comes down to navigation. The basics are identical to Android 10's full-screen gesture navigation: swipe up from the bottom to go home, and swipe from the left or right to go back. Each screen has its own set of gestures, which helps limit confusion when using both displays at once. Swiping back only goes back on the screen you swiped on, not both.

Dragging the navigation pill allows you to move the selected application across screens, and dragging the app into the center of the Duo will stretch the app to fill both displays. It takes a little while to get used to, especially if you like to swipe left and right on the navigation pill to switch between apps on stock Android. This works in both horizontal and landscape orientations, but when you try to type something in landscape mode, the bottom screen becomes a keyboard for whatever application you're typing in.

Beyond the changes to how system navigation works, there's not too much different between Android on the Surface Duo and Android on a Pixel or Nokia phone. There's no 'skin' that drastically modifies how the system looks or behaves, and in my testing, the Surface Duo doesn't break Android's battery optimization like some other phones do.

While I would have liked to see a few features on the Surface Duo that are common on manufacturer skins, like scheduled dark mode and more stylus functionality, I'm sure many will appreciate that the Duo doesn't stray too far from Google's vision for Android. If you haven't read it already, check out our full review of the Surface Duo for more details.

Chromebook owners can get two games worth $9 for free: House of Da Vinci and Project Highrise

Android 11's sound picker will work with cast devices, but apps will need to be updated to ...