Samsung may have tainted its name forever with the bleepity bloops of Touchwiz, but these days the company's One UI skin is much more acceptable. One UI 2.5 is the latest major release of the Android skin, but Samsung has been accepting applications for testing the next iteration, One UI 3, in a pre-beta phase with developers. With the release of Android 11 yesterday, the company has now released the pre-beta to developers.

Samsung is currently rolling out the developer pre-beta to partner developers in Korea, although other regions should follow shortly. In this phase, eligibility looks to be limited to developers who want to perform compatibility testing with specific service providers and select device models from the Galaxy S20 series (S20/S20+/S20 Ultra LTE/5G). In Korea, eligible testers must use KT, LGU+, or SKT as their cellular network providers. In the US, Sprint and T-Mobile are compatible. Unlocked devices in both regions will work, too. Samsung is no longer accepting new applications, as it has enough testers in the program for now. 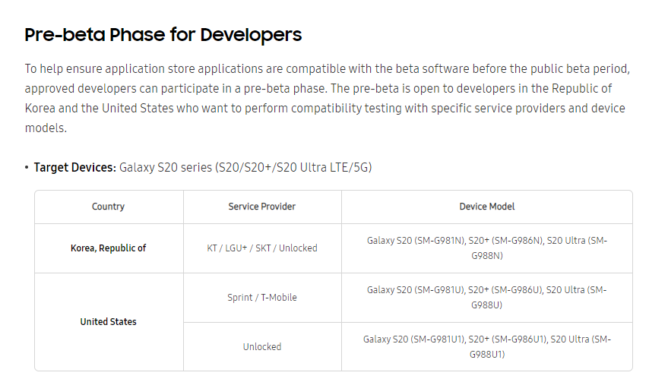 Much like Google's own beta program, Samsung's public beta will be open to many more users once the software is relatively stable. Customers in China, Germany, India, Poland, the Republic of Korea, the United Kingdom, and the United States will be able to enroll in the One UI Beta Program in the coming months. Samsung's policy when it comes to updates is improving. The company has beaten Google to the security patch game, and with the new Galaxy Note20 line, it's even matching the Pixel policy of three major Android upgrade cycles.

Updated the article to reflect that Samsung is rolling out the OneUI 3.0 beta to developers.