Motorola may not be the same company it was when it gained renown under Google's ownership, but it still does a pretty good job when it comes to budget devices. The Moto E line offers some of the cheapest (non-garbage) phones available in the US, and now we have a look at the upcoming Moto E7 Plus, which promises to be a longevity champ with an absolute chonker of a battery.

The selling point of the Moto E7 Plus is definitely going to be its endurance. It packs in a 5,000mAh battery — the same size as Samsung's top-of-the-line S20 Ultra. Its display isn't quad HD nor OLED, but it is a 6.5" 20:9 IPS panel that will be just fine for the average consumer.

Under the hood, there's a Snapdragon 460 chip paired with 4GB of RAM and 64GB of storage that can be expanded with a microSD card — those figures are both pretty impressive in this price bracket. 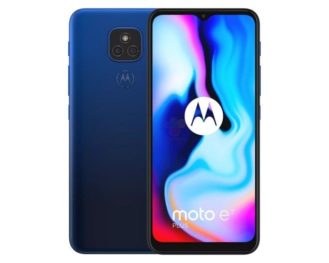 Gotta get that 2MP depth sensor so Motorola can call it a dual-camera system.

For cameras, the E7 Plus has a dual lens system on the back: a 48MP main sensor and a puny 2MP sensor for gathering depth information. The selfie cam is the typical 8MP size, housed in a teardrop notch on the front.

Motorola isn't great at keeping budget phones updated, and it looks like the E7 Plus will be no exception. It's launching with Android 10 and will probably stay there. That means no boba tea, pinched fingers, or happy teardrop emoji. And there's no USB-C nor NFC on board, which is a bummer. The price is reportedly going to be 149 euros, which comes to about $175. As long as you keep that in mind, the E7 Plus will probably be about as solid as the standard Moto E7.