5G, the latest generation of wireless connectivity, is all the rage these days. Many high-end phones are supporting it, and Google is gearing up to make it accessible it at a lower price bracket with the upcoming Pixel 4a 5G. But how much day-to-day difference does 5G make for the average user? PCMag's annual network testing in the US reveals that while 4G speeds are getting better, 5G is not yet delivering on its potential.

Due to complications from COVID-19, the test this year was conducted in 26 cities nationwide, including Baltimore, Las Vegas, Seattle, and Washington, D.C. Approximately two dozen drivers used testing kits equipped with Samsung Galaxy S10 series phones for 4G and S20 series phones for 5G. They stopped in a minimum of 12 locations per city, with each stop being 15 minutes. The results from these tests were calculated into an overall city score. 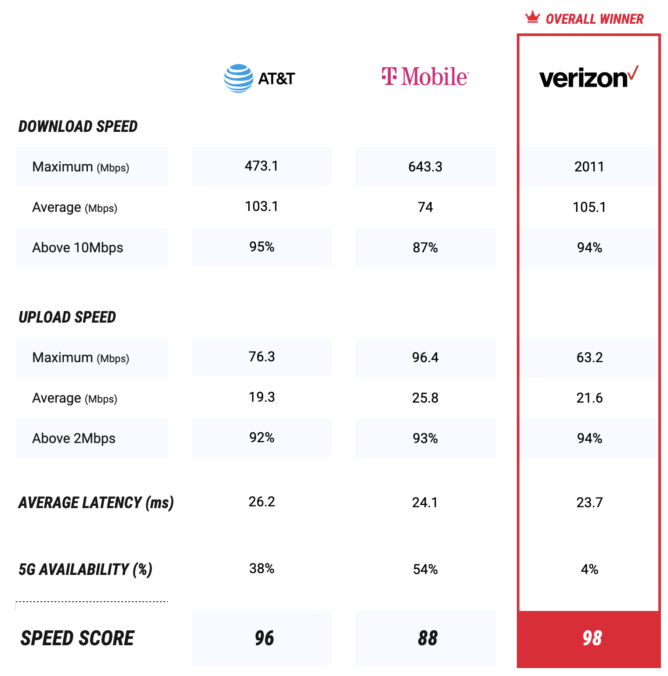 Here's the full breakdown from PCMag.

Overall, Verizon comes out on top with an impressive 98/100 speed score, thanks largely to its robust 4G network. Using its 5G bands, testers achieved download speeds up to 2011 Mbps, which handily beats T-Mobile's 643.3. However, running into those kinds of speeds in the wild is rare. Verizon only offers 5G in 18 of the 26 cities tested, and only in certain areas of those cities. AT&T and T-Mobile purport to offer broader access to their 5G networks, but T-Mobile's 5G speeds aren't much of an improved over 4G, and AT&T's network speeds actually got slower with 5G — now that's impressive.

So what's the takeaway? For now, there isn't much to 5G beyond the hype. We hear about low-latency gaming and surgeries in VR, but those things are probably a long time away for most of us. Real 5G hasn't even reached most places in America yet, and it's going to take time to roll it out to more of the spectrum.

The good news is that 4G speeds are continuing to get better across the board, and this is just the start for 5G. Carriers are insistent that things will improve sooner rather than later as more people buy phones with 5G and new towers and equipment are deployed with support for the new standard. For now, you can check out our guide to find out if major carriers offer 5G near you.