Spotify is one of the most popular ways to stream music these days, and it isn't showing any signs of slowing down. From making podcasts a priority to adding standalone Chromecast support to the desktop app, the company continues to improve the audio experience. Now we're learning about a number of features that appear to be in the works, including karaoke capabilities and Group Sessions to make jamming out with friends easier.

These works in progress were revealed by serial feature uncover-er Jane Wong in a series of tweets. The most fun feature of the batch currently in the works is definitely Karaoke Mode, which appears to display synced lyrics while letting users adjust the volume of the vocals on the track — depending on how much of a solo they want to sing. 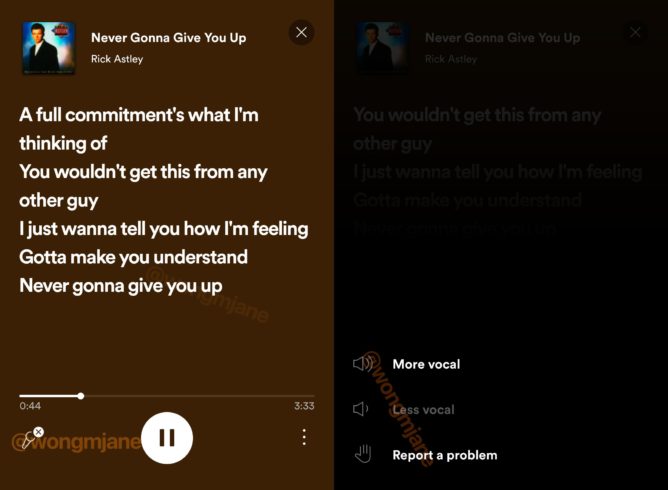 Are we ever going to give up the rickroll? At least it's catchy.

Group Sessions is also being experimented with to let users on the same Wi-Fi network connect to audio devices like speakers. Spotify has always been the best service when it comes to listening on multiple devices, and now you'll be able to share your devices with friends as well.

Car Mode is another experience that may be getting big changes soon. There's a new home screen for the in-car UI that features larger imagery and a redesigned navigation bar. A banner appears at the top letting users know that speaking to the Google Assistant can control playback. When listening to a track in Car Mode, there's a refreshed Now Playing design being worked on that has big round buttons near the bottom to give quick access to shuffling and voice control. 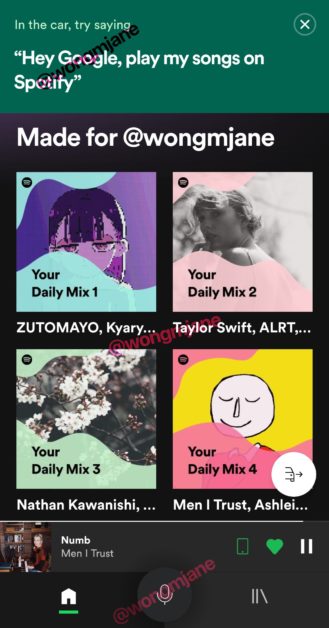 I'm not a big fan of this Now Playing UI, but maybe it'll be more intuitive than the current one.

Several other tweaks are in testing as well, like allowing free users to listen to offline songs for up to 30 minutes per day. There's a new playlist option called Auto-refresh that lets the playlist automatically update with new songs while keeping the ones manually added.

Podcasts on Spotify may not be everyone's cup of tea, but the company is continuing to improve on the experience with a new Your Episodes section in the library where users can save episodes. Finally, there's a new animation for liking songs that's being tried out. It looks a little too lively blown up big, but I'm guessing it'll look better in the actual app.

Spotify is working on a new like animation pic.twitter.com/kZDkaJ7Mov

Spotify has never been my music platform of choice, but these improvements and additions should be helpful to many subscribers. It's clear the company is serious about sticking it to rivals like Apple Music and YouTube Music. Shoot, the company even optimized its app for Chromebooks and Android tablets last month — that's dedication that the YTM team should copy.

These new features are still in testing, so it's unclear exactly when they'll start to show up in the wild.