The X950G is equipped with Sony's flagship X1 Ultimate processor, a 64.5" 3840x2160 HDR-capable LED panel, four HDMI inputs, and built-in Android TV. Looking at reviews, RTINGS praised the brightness level, out-of-box color accuracy, and motion handling, but didn't so much like the viewing angles (the 65" model doesn't get Sony's X-Wide Angle tech). TechRadar liked the X1 Ultimate chip, Netflix Calibrated Mode, motion handling, and 4K upscaling, but had qualms with the sound quality, 4K and HDR black levels, as well as a Netflix audio bug. Of course, you should do your due diligence before purchasing, but $998 for this TV is cheap any way you slice it. 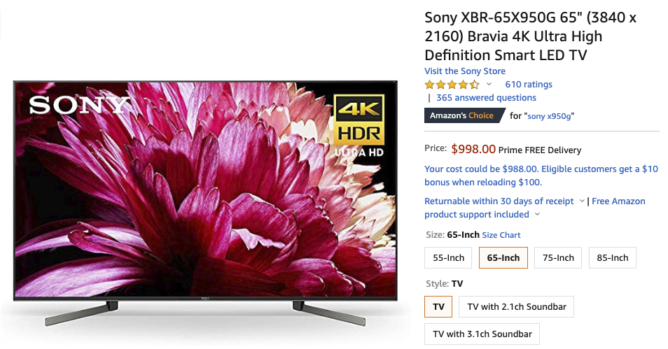 Amazon's $998 price for the 65" X950G is unrivaled. A couple months back, it was available at an already cheap $1,078 from Amazon, but this beats even that deal. For reference, Best Buy currently has this TV on clearance for $1,400. Delivery is free. This discount probably won't last long, so pick one up while you can.

Zhiyun's Crane 2S gimbal has the strength and versatility to be a must-have for serious ...