Smartwatches have come a long way in the past few years. Apple makes some of the best hardware on the market, and companies like Fossil and Mobvoi are keeping Wear OS alive until wearables with Qualcomm's new chipset are released. Huawei unveiled the GT2 watch last year and followed that up with the fitness-focused GT2e. Now it's preparing to launch a Pro version, as leaked photos and a spec sheet give us our first preview of the upcoming Huawei Watch GT2 Pro.

The details shared here indicate the Huawei Watch GT2 Pro will be one of the few smartwatches available today with proper wireless charging. That means you'll be able to drop it on any old wireless charging pad (or your phone itself) instead of fiddling with some dinky proprietary charger. The 455 mAh battery in the GT2 Pro combined with Huawei's LiteOS is said to last up to 14 days on a charge, which is pretty impressive. 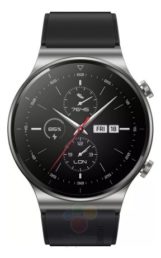 Other specs include Bluetooth 5.1, 32MB of RAM, 4GB of storage, GPS, and water resistance of up to about 160 feet — just like the standard GT2. The circular OLED display has a 454x454 resolution and measures 1.39". The watch itself is sized at 46mm, which is a bit larger than I'd prefer. With the state of Wear OS these days, it might be a good thing that the watch runs Huawei's LiteOS. The app selection will be pretty limited, though, as a result.

Huawei's new GT2 Pro smartwatch is said to be hitting the market in Germany in the coming weeks, with a starting price of around 280 euros ($332.)

Moto G9 Plus photos and specs leaked by carrier listing

Zhiyun's Crane 2S gimbal has the strength and versatility to be a must-have for serious ...