When Samsung launched the Galaxy S20 earlier this year, we really liked it. But it hasn't caught on with your average phone-shopper as strongly as last year's S10 series had. Following rumors of a lower-priced alternative to the original S20, some new specs and renders of this Galaxy S20 FE (Fan Edition) 5G have surfaced.

The handset should maintain the same basic design language of the S20, but make several key changes to keep the price down. The size of the device is tipped to be approximately 161 x 73 x 8mm — a bit larger in every dimension than the standard S20. It's set to feature a flat display that's roughly 6.4" large. That's a bit bigger than the S20, but it will be keeping the same 120Hz refresh rate, which is reassuring to see. A hole punch selfie camera takes center field on the front along with an in-display fingerprint reader. 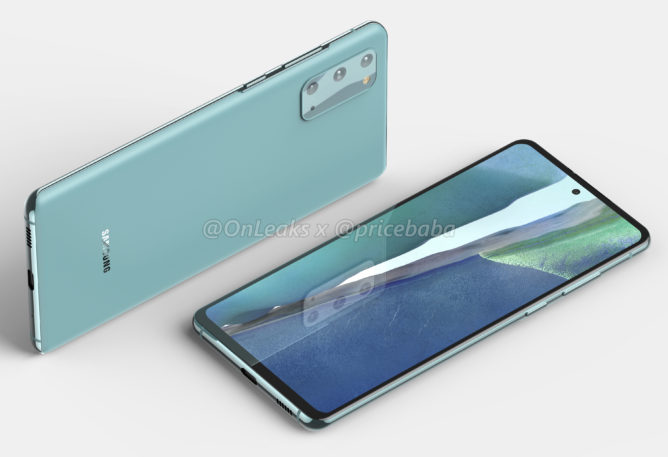 The camera housing looks familiar, but the cameras inside are a little different: Three lenses, a flash, and a microphone live in the rounded rectangle. The primary sensor is the same 12MP Sony IMX555 found on the S20. There will also be a 12MP wide-angle like the S20, but the third zoom camera has been bumped down from a 48MP crop-zoom sensor to an 8MP telephoto lens with just 3x optical zoom. The selfie camera might pack in a 32MP sensor for crispy self-portraits.

Powered by the same Snapdragon 865 as the regular S20, the S20 FE should be no slouch in the performance department, though there may be a cheaper variant that lowers the chip power and leaves out 5G connectivity. It will likely come with the choice between 6GB and 8GB of RAM, with storage options going up to 512GB. And of course, the phone will run Samsung's latest OneUI 2.5 software based on Android 10. The battery size is likely to be 4,500mAh with fast charging capabilities.

While Samsung may not have met its sales expectations for the standard Galaxy S20 earlier this year, releasing the Galaxy S20 FE 5G might be a good way to boost them back up. From a specs perspective, it looks almost as good as its older sibling, with a 120Hz screen, Snapdragon 865, and a triple-camera array. The rumored color options (red, white green, and orange) sound nice as well. Pricing is yet to be revealed, though a South Korean news report pegs it selling for around Rs 56,000 ($750) starting in October. There's no word on availability in the US, but since the Galaxy S10 Lite made it to the States, I wouldn't be surprised if the S20 FE 5G does too.

WinFuture has now published additional details about the S20 Fan Edition. The site confirmed that there will be two versions of the phone: a 4G model that uses an Exynos 990 chipset (the same found in the international Galaxy S20 and Note20 models), and a 5G variant that uses the Snapdragon 865. However, unlike the regular Galaxy S20, you'll reportedly be able to buy the Snapdragon variant in Europe. WinFuture also confirmed the existence of several color variations, including white, blue, orange, lavender, green, and red. Some might be exclusive to the 4G or 5G models (WinFuture believes the blue could be only for the 5G version), but that's still more options than you see on most Samsung phones. You can see more photos at the link below.

The 5 best things about the Samsung Galaxy Note20 Ultra