Sony has been making noise-canceling headphones for years, and it's gotten pretty good at it. We had very few complaints about Sony's WH-1000XM3 headphones, so there wasn't much to fix in the latest iteration. Still, Sony listened to customer feedback and made several notable improvements in the new WH-1000XM4. They still sound phenomenal, but Sony added wear detection, some new Bluetooth tricks, and made the noise cancelation even more effective. At the same time, the XM4s look almost identical to the last-gen headphones. They don't look ugly or cheap, but the design isn't as striking as I'd expect from the best noise-canceling headphones on the market. And that's what they are—the best. I can (and will) complain that Sony's voice quality could be better, and there's still no water-resistance, but I'm just picking nits. The WH-1000XM4s are fantastic headphones.

The WH-1000XM4s look almost identical to last year's headphones, and even up close it's hard to tell the difference. There are a few very slight changes to the buttons, and there's a proximity sensor tucked away in one of the earcups (see below). This addresses a notable pain point from the last version of Sony's flagship headphones. Now, you can take the headphones off, and they'll automatically pause until you put them back on. The sensor will also allow the headphones to turn off automatically after about 30 minutes of being idle, which will save me from accidentally leaving them on inside the case. That's something I managed to do with the XM3s far too often. 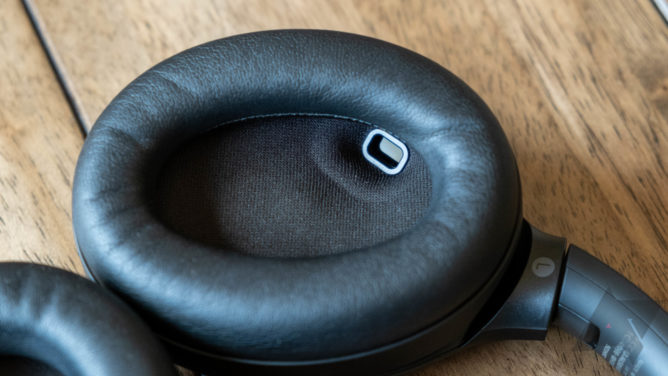 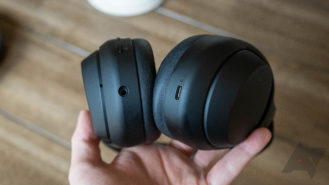 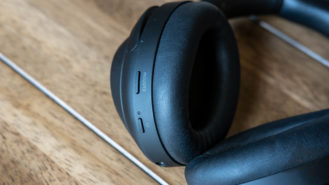 Otherwise, it's the same old song—the headphones come in black or silver, both with gold accents and Sony logos. I applaud Sony for keeping its branding minimal, especially with those big, flat earcups just begging for some branding. These headphones are surprisingly light, making them comfortable to clamp to your head for hours at a time. The plastic frame has a matte soft touch texture that makes the hardware feel comfortable and inviting. Although, it does pick up oils from your skin. The cushions on the earcups and the headband are soft and pliable without feeling flimsy like cheaper cans sometimes do.

The external surface of the earcups are flat because the right one is a touchpad. You can swipe to change the volume and skip tracks. You can also pause and play with a double-tap. The pads are large enough that I get next to zero missed commands. On the bottom of the right cup, you have a USB-C port for charging. On the opposite side, there's a headphone jack, a power button, and a custom button that defaults to toggling noise cancellation. There's still no water protection, so don't wear these in the rain. 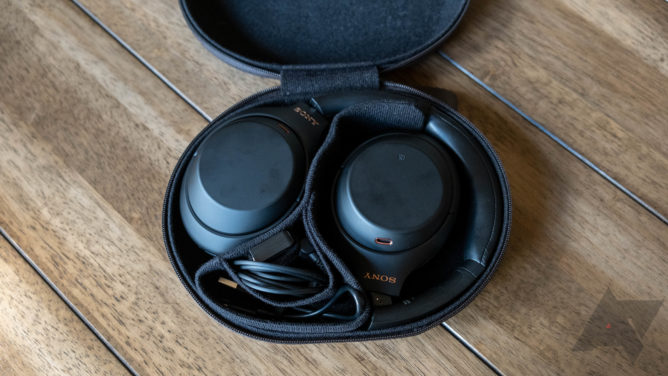 Both earcups rotate independently so you can fold the XM4s up inside the (very nice) included case, which is identical to the case that came with the last version. You also get a USB-C cable, a headphone cable, and an in-flight adapter.

Getting up and running with the WH-1000XM4s is simpler than you might expect. Sony added support for Fast Pair, so you can tap the notification on your phone and get linked up in a few seconds. There's also support for multipoint pairing this year. That means you can pair two devices, and the headphones will be able to switch between them without manual connection swapping. I've tested this with a laptop and phone, and the headphones are smart enough to switch over to the phone when I get a call. I know some people have had issues with this, but I didn't. Admittedly, I leave multipoint off most of the time because it's not compatible with Sony's LDAC codec, and that's more important to me. Most Android phones support LDAC, and it should give you better results on those devices, particularly if you're streaming a high-fidelity audio source. Annoyingly, Sony doesn't support AptX on these headphones even though the XM3s did. 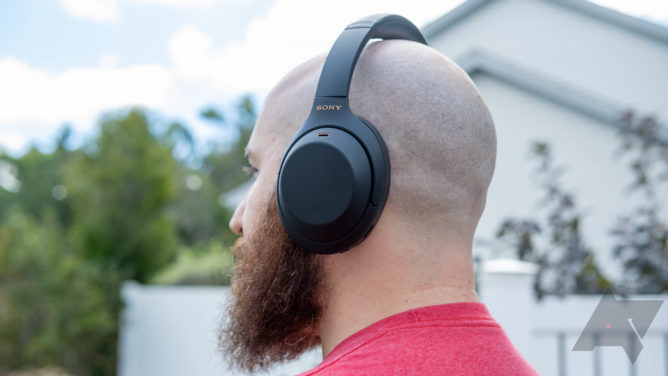 You should not expect a substantial improvement in audio quality from the WH-1000XM4 headphones. The drivers inside are the same, and I have not detected any differences in tuning. That said, I liked the audio on the XM3s and the XM4s are just as good. Highs and mids are well-separated and sound great. The bass sounds a bit pumped up even without an EQ setting, but who doesn't like a little punchy bass? I sure do. The audio is rich and free of distortion even at high volumes. This is as good as Bluetooth headphones get right now.

The only audio improvement Sony has cited is "360 Reality Audio," which allegedly provides a concert-like experience. These tracks do sound interesting, but I don't know that it's something I'd want to listen to all the time. There are also only a few sources (eg. Tidal) for 360 Reality Audio, and content is lacking. I wouldn't pay extra for this, but the capability is there if you want it.

If the XM3s had a shortcoming, it was voice quality. Sony says it has added a technology called "Precise Voice Pickup" to the XM4s to make it better. Voice quality still isn't best-in-class, but it's noticeably clearer than the previous version. I'd have preferred Sony focused more on this, but admittedly, the time spent improving ANC was not wasted. The active noise canceling on the last-gen headphones was already amazing, but now it's even better thanks to a new Bluetooth audio chip and the aforementioned voice processing tech. The sense of isolation you get wearing these headphones is pretty unreal. Most noises from the outside world fade away, and the ANC hiss isn't as noticeable as it is with other headphones. It takes something pretty loud and irregular to break through. Even with ANC on, Sony promises 30 hours of battery life. I got very close to this over the course of my testing.

You also get instant Assistant access from the "Custom" button.

You won't be able to hear what people are saying to you with ANC activated, and Sony hopes to address that with a feature called Speak to Chat. When enabled, the headphones pause your music and ANC whenever they hear you speak. It works, but even the lower sensitivity settings frequently paused my music when it shouldn't have. Clear your throat too loud, and you have no tunes for the next 30 seconds. You can lower that to 15 seconds, but it's still annoying. I have turned this feature off and instead rely on Quick Attention as I did with the XM3s. By covering the right earcup with your hand, you can get external audio until you release it. This continues to be a fantastic feature.

Yes. No snark, no caveats—if you're in the market for a set of high-end Bluetooth headphones, you should get the WH-1000XM4. The audio quality is excellent, and the noise-canceling is extremely effective. I also like the touch controls, particularly the Quick Attention feature that lets you toggle ANC to have a brief conversation. The addition of a proximity sensor for wear detection is also much appreciated.

Since these headphones are going to be on your head for potentially hours at a time, they better be comfortable. They are, but Sony didn't have to change anything about the physical design to make that happen. While innovation is great, there was nothing wrong with the XM3's design. The XM4s are light, well-padded, and understated leaning slightly toward classy. You won't have to take them off to charge very often with 30 hours of battery, ANC enabled. 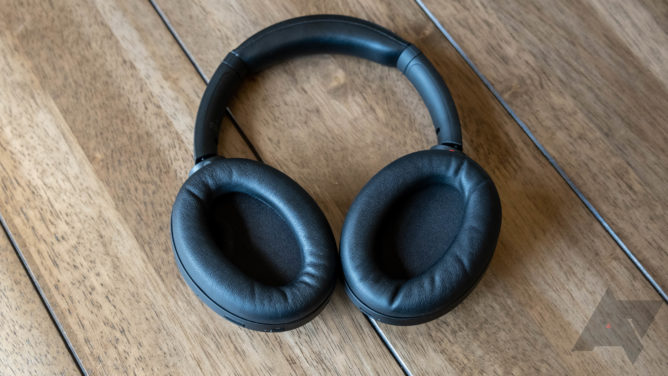 There are some small issues that should not dissuade you from taking the leap. The XM4s have just okay voice quality, speak to chat is problematic, and there's no AptX. You could also argue that recycling the same design is a con. I don't think any of that is a deal-breaker. The biggest issue is the price. Most people won't want to spend $350 on these headphones when the XM3s are almost as good and regularly on sale for much less. Still, if you want the best and can afford the WH-1000XM4, I can strongly recommend them.