Whenever people discuss digital voice assistants, the conversation usually ends with the Google Assistant triumphing over Apple's Siri. I haven't owned an iOS device since I sold my childhood iPod Touch, but earlier this summer, I took the plunge and bought an iPhone 11 to see what I'd been missing — and to check out Siri's smarts for myself. It's much better than I expected, and in fact, there is at least one area where Siri makes the Google Assistant look like an off-key cover band: music.

I'm a big music listener. Whether it's jamming out to the latest twee pop tunes during a brisk morning walk or turning on a classic Springsteen album while making dinner, music is a constant companion. Testing Siri's abilities when it came to the Apple Music experience was one of my first priorities. To my mild surprise, it blows the Google Assistant's integration with YouTube Music out of the water.

Both assistants will play a song when you ask, but the interaction is much different.

Let's begin with the basics.

Both assistants will play a song when you ask, but the interaction is much different. When you trigger Siri by holding the power button and tell it to play a track, playback starts almost instantly, with no voice response delaying the music. Google Assistant, however, maddeningly insists on repeating the title back to you, along with the name of your chosen music app, just in case you've forgotten. (If I manually choose a default music app, there's no need to remind me every single time!)

When I felt moody the other day. I told both assistants, "Play Wicked Game by James Vincent." As Siri began playing the song, the Google Assistant piped up, "Sure, Wicked Game, Live at Kilkenny Arts Festival, Ireland, 2011. Playing on YouTube Music." By the time the first notes started playing on the Pixel, the iPhone was past the prelude and well into the first verse.

Jumping straight into the music is so much better than sitting through a monologue.

Shuffling an album might seem like a straightforward command, but guess what? While Siri handles it perfectly, the Assistant plays the album straight through, starting with the first track and ending with the last. I thought I had to be saying something wrong, so I experimented with multiple phrasings. But no, the dynamic duo of Google Assistant and YouTube Music cannot shuffle an album.

So there's some simple stuff. Apple pulls ahead, but Google's still in the race. Not for long.

A singer who goes by the moniker of Foxes released her first new tune in a few years back on May 20th. That morning, I attempted getting both assistants to play the track, and it was not pretty. Well, Siri did great. It played the song like it does every other song, and without any repetitive monologue beforehand.

Google Assistant? Well, take a look at this comparison for yourself. 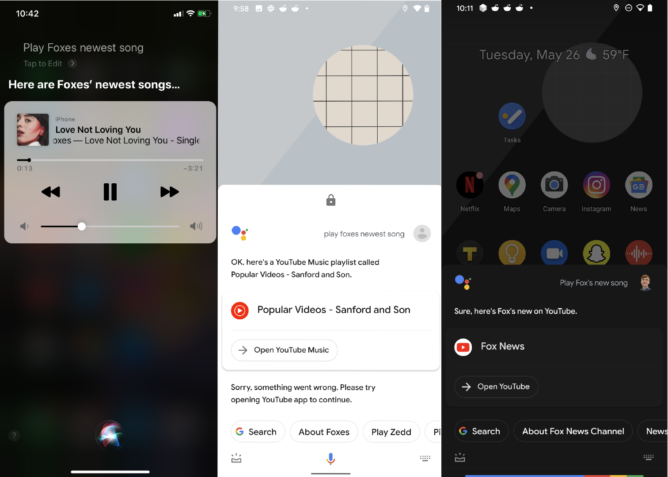 Siri gets it right on the first try, while Assistant fails spectacularly both times.

The first time I asked, the Assistant somehow assumed I wanted a "Popular Videos" playlist featuring a sitcom called Sanford and Son. Except it couldn't even get that right, because there was an error. Oh, and the error said to try opening the YouTube app for some reason, rather than YouTube Music. 🤯

Even worse might be when I repeated the request six days later, switching up my phrasing in an effort to get better results. This time, the Assistant tried to show me Fox News on YouTube — like, what?

To be fair, Google has now fixed the problem with this specific track. But issues still pop up with new songs. Miley Cyrus released "Midnight Sun" on August 14th, and as of this writing, asking the Assistant to "play Miley's newest song" brings up "Don't Call Me Angel" — a song that debuted on September 13th, 2019.

Adding a song to your library? Siri can do that. Google Assistant merely says the action is not supported. Adding a song to your playlist? Siri asks which playlist you'd like, while Google says it's not supported. Playing local music downloaded offline? Siri starts playing your library, and without a connection, defaults to downloaded songs. Meanwhile, the Assistant blasts a track called "Murder on my Mind" that I've never listened to before, much less downloaded.

Saying it's not supported would be one thing, but the Assistant is mind-bogglingly dumb at times.

So what does this mean? I think the "Siri is trash" narrative that so many people push online is outdated. It's categorically untrue these days. Sure, the Google Assistant might have been able to handle follow-up questions about the Queen of England and her height a year or two sooner than Siri, but it can't even add a song to a playlist in the year 2020. We have robot dogs that can run three miles per hour, but Google's voice assistant can't shuffle an album on its own streaming platform. The Google Assistant may be better at just plain understanding you (sometimes), but if it can't do anything with what it hears, is that really much of an advantage?

When a company is always restarting the race, is it any surprise it can't reach the finish line?

Google's "toss it at the wall and see what sticks" approach to product development has upsides, but the downsides when it comes to music appear monumental. Apple stuck with Siri and Apple Music while continually improving them. Google introduced a jumbled mess of competing services with half-baked integrations that get shut down before the general public is even aware they exist. When a company is always restarting the race, is it any surprise it can't reach the finish line?

I'll end this on a happier note: I feel like the YouTube Music experience is close to turning a corner. The service has seen rapid iterations over the past few months. Playing personal playlists from the Google Assistant is in testing now, which may well be the first step to better integration between the two. Google has indicated it's all in on YouTube Music. Google Play Music has an official shutdown date. Let's just hope that everything comes together before the big G drops another remix.

Almost all of these comparisons were done with a Pixel 4 and an iPhone 11, both running beta versions of Android 11 and iOS 14 with the most up to date versions of YouTube Music and Apple Music.