You technically don't have to buy any hardware to start playing Stadia: you can use a mouse and keyboard on a desktop or laptop, and even touch controls on mobile. But to get the best TV experience, you'll need both a Chromecast Ultra and a first-party Stadia controller. If that's an upgrade you've been considering, now's a good time: the Premiere Edition bundle that includes both is $10 off on the Google Store. 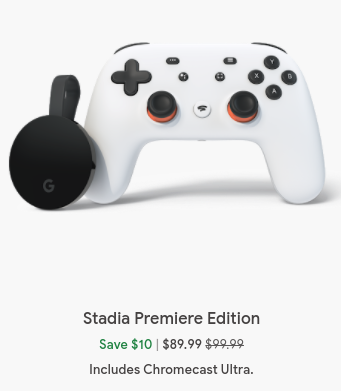 The Stadia controller connects to your remote game session over Wi-Fi, ostensibly eliminating some of the lag inherent to any cloud gaming setup by cutting out the Bluetooth middle man. Whether those milliseconds matter to the average gamer is up for debate, but the fact remains that it's the only controller you can use to play on your television (unless you run an HDMI cable from your PC, that is). The Chromecast Ultra is a regular Chromecast Ultra, which means you can also use it for 4K video streaming when you're not gaming.

Google doesn't say how long the deal will be available, only that it's a limited-time offer. Head over to the Google Store to check it out.