Earlier this year, Facebook introduced worldwide a tool for users to export uploaded pictures and video to Google Photos. This was all well and good, but if you preferred to keep your photos elsewhere, you were stuck manually adding them to your favorite service. Today, Facebook announced integration with both Dropbox and Koofr, allowing you to export your photos and videos to the services with just a few clicks.

Facebook stresses the privacy and security of the new service, stating that you'll be prompted to re-enter your password upon choosing to migrate your content. After selecting a destination, you'll enter your password for Dropbox or Koofr to establish a temporary account link. Your data will then be encrypted and transferred to the selected service. Dropbox states that upon beginning the transfer, all activity will be handled in the background — you won't need to keep Facebook open to complete the export. 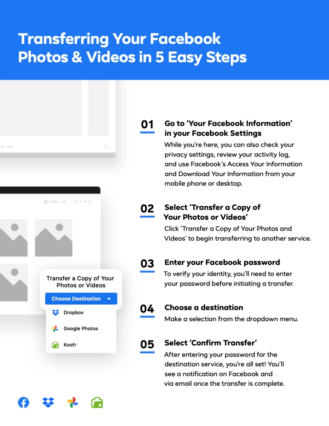 Step-by-step instructions for exporting your photos and videos

After completion, a folder marked "Photo Transfer" will appear in your Dropbox. The process is similar for Koofr, with your content being placed in a folder named "Data transfer." With a seemingly secure and simple workflow, Facebook's updated export function launches today, and should be available now.