High-end audio brand Harman Kardon is owned by Samsung these days, but it's still capable of some fine hardware, as I discovered when I reviewed the Citation One speaker about this time last year. It's part of a wider range of Google Assistant-enabled products that sound much better than most other smart speakers, which is now being expanded with several new devices.

Portable smart speakers have been the talk of the town recently thanks to Bose and Sonos launching long-overdue models, albeit it at eye-watering $350-400 price points. Now it's Harmon Kardon's turn with the Citation 200, complete with eight-hour battery life, touch controls, and an IPX4 rating (that means it's splashproof). Like competing products, it comes with a charging base and can stream music over WiFi or Bluetooth. It's also got full Google Assistant/Chromecast functionality, like the rest of the Citation lineup. Unlike its pricey opponents, the Citation 200 comes in at just under $300 (£280 in the UK), which is likely to represent good value if it sounds anything like its siblings. 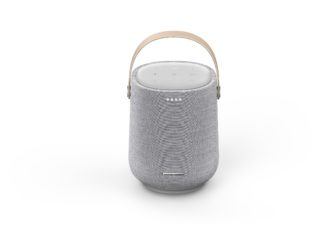 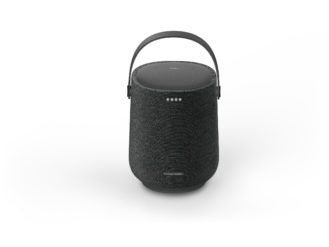 The second most exciting product in this announcement is the MultiBeam 700, a compact soundbar with a full-color LCD display thrown in for good measure. Seven drivers work together with Harman Kardon's proprietary technology to apparently create immersive surround sound with HD audio. Pair it with the new Sub S and you'll get an impressive but spendy home theatre experience. The MultiBeam 700 will set you back $700/£450 and the Sub S is $400/£380. Why the USD/GBP price difference for the soundbar is so great, who knows, but it's certainly a much better deal on British shores.

There's also something for the bedroom, in the form of the Citation Oasis. It's a compact speaker with a built-in alarm clock and a wireless phone charger on the top. It'll turn off WiFi during sleep hours so you're not disturbed, and it costs $200/£180. Additionally, Harman Kardon will also be offering a pair of Citation One MKII speakers in a bundle $350/£350. The new products don't have a solid release date yet, but expect them to arrive in the spring.

Citation 200 finally gets a release window

After being announced all the way back in January at the CES trade show, the Harman Kardon 200 portable Google Assistant speaker is finally about to go on sale. According to the company, it'll be available to purchase next month — at least in the UK, where it will cost £299.99 from Harman Kardon's website.